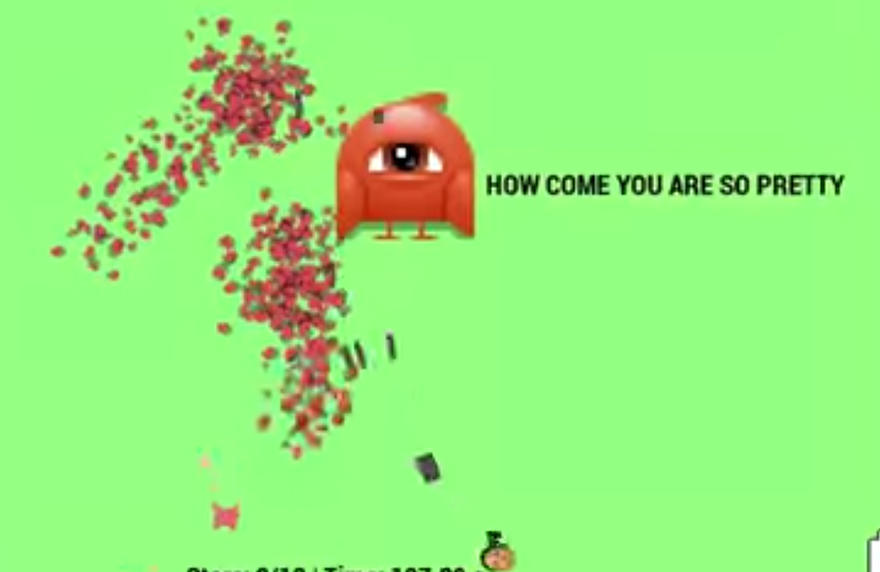 It started with just a small blue bird reminiscent of Twitter’s mascot or Angry Birds, a little icon you had to simply move with the four arrow keys to the exit in the lower-right corner of the screen. But the real goal of the game “please be nice 🙁“ was to be the first person to finish it, because, as we reported back in March, that meant you got suggest a feature. And then creators Aran Koning and Herman Groenenboom added it in.

The first suggestion was to add a character selection screen with more options for your protagonist, including female choices. Next came the idea to make the player feel “Love”—which brought another bird with hearts floating above it chasing after you. The next victor wanted a background with flashy colors. In the first week Nice went through 40 iterations. Since the game launched in March, it has been modified and modified up to version 133.

Koning and Groenenboom are computer science students in Utrecht, in the Netherlands. Koning said, “Please be nice 🙁 was inspired by TwitchPlaysPokemon, but instead of people working together in an anarchic way to beat a game, they make a game instead.”

So, where does it stand now? They were showing off its current state at E3. A lot has happened. While the first character selection screen featured a variety of little blue birds, it now has only one bird left, the others replaced with a cartoon tank, a dragon’s face, an angry lawn chair wearing a party hat, Mudskip from Pokemon, the Space AI from Portal 2, two of the victors own faces, the face of creator Aran, Harry Styles from the band One Direction, and, inevitably, actor Nicolas Cage.

When guns were first added, there was the usual variety with handguns, shotguns, rifles, etc. And now? A vortex gun. A gun that shoots guns. A gun that shoots turtles. A laser sword. And you now dual-wield, picking two weapons on the weapon select screen. And now there are monsters out to get you, creatures you need to shoot. There are power-ups to help you, with more life (you can eat food, since version 85), stronger weapons, etc. — just don’t pick up the whiskey bottle, which makes you drunk.

The game no longer finishes with one level, but with a dozen. The levels are more colorful, larger (with a mini-map in the corner). There are random photos of sleepy kittens, random phrases in English and Japanese, random enemy types. The simple white box of a level disappeared in just a few short months. Now it is a hellscape of distraction, a plethora of iterative features that are both difficult to play with and a wonder to behold. (You can download any of the 133 versions at Aran-Koning.com)

“It has been really interesting to see what kind of ideas people came up with. And even though most of the player suggestions were pretty standard stuff, there’s also some really cool ideas going on,” said Koning.

When Aran gets backs to iterating the game again, I wonder where it will be in one month or in one year. Will it reach a sublime level of madness and twitchiness? Or become beyond redemption? Henry Ford is quoted as saying that if he asked people what they wanted, instead of inventing the automobile, they would’ve requested faster horses. Or in this case the horse spits out turtles while a cat photo screams Japanese at you.