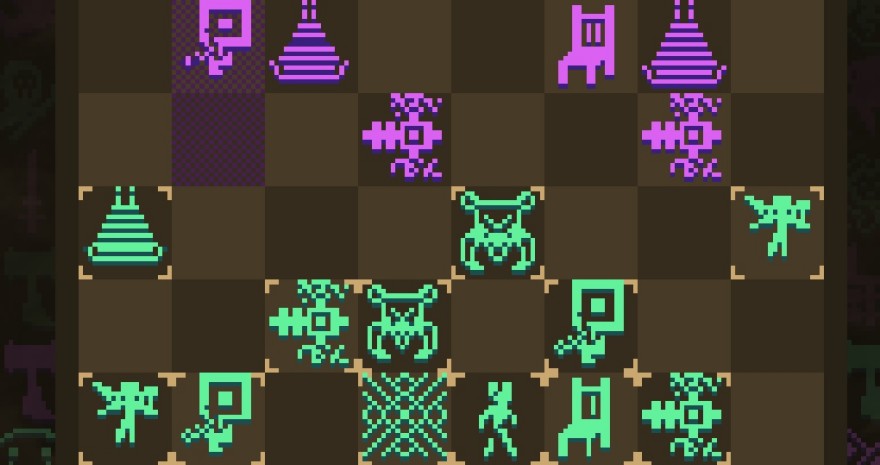 What would happen if Chess could get drunk? Would the knight fall off their horse? Would the queen take a fancy to one of the pawns? Would the rook go diagonally?

This is what the slur-titled Chesh looks to explore. It’s the next game from Damian Sommer, who has already mixed up the choose-your-own-adventure game with the IGF-nominated The Yawhg, and now we find him throwing grog down the dusty throat of a classic board game. The hooligan! But no, Sommer’s idea is pretty smart, potentially opening up Chess to new players by ditching all of its centuries-old rules. All of them? Yeah, why not?

The pitch is actually quite simple: “Every game of Chesh starts with different pieces, and each piece has a random movement rule assigned to it.” There are 533 different pieces. Five-hundred-and-thirty-three. Yeah, wow, good luck memorizing what each of those do. And that’s really the point. What having all of these pieces means is that, upon starting each match, you’ll first have to get acquainted with what each piece you’re randomly assigned can do. There’s no tutorial, no guide; you have to work everything out while you play. So does your opponent.

Sommer came up with the concept behind Chesh while having a conversation with his game-making friend Droqen during Toronto Game Jam 9 (we played the first iteration of it at the event itself). They were discussing how to solve a problem that existed in “most abstract perfect-information board games (games where both players have full knowledge of every aspect of the game).” The problem in these types of games is that the player who goes first is at an advantage.

The pair saw this in the game Connect Four in which the first player will win every time if they play perfectly. Other games, such as Go, try to address this problem by awarding bonus points to the player who goes second. But Sommer wanted to actually fix this problem. And that’s when he came up with the idea of, essentially, breaking Chess.

Since then, he’s worked with over 30 artists to create the 533 pieces in Chesh (ensuring it’s colorblind friendly), and also adapted it work on mobile. Now, this fancier version of Chesh, which will be released for iOS on October 8th, has three different game modes (Bullet Chesh, Infinite Chesh, and Blitz Chesh), and lets you play against an AI-controlled opponent, or in online or local multiplayer if you prefer the wit of another human.