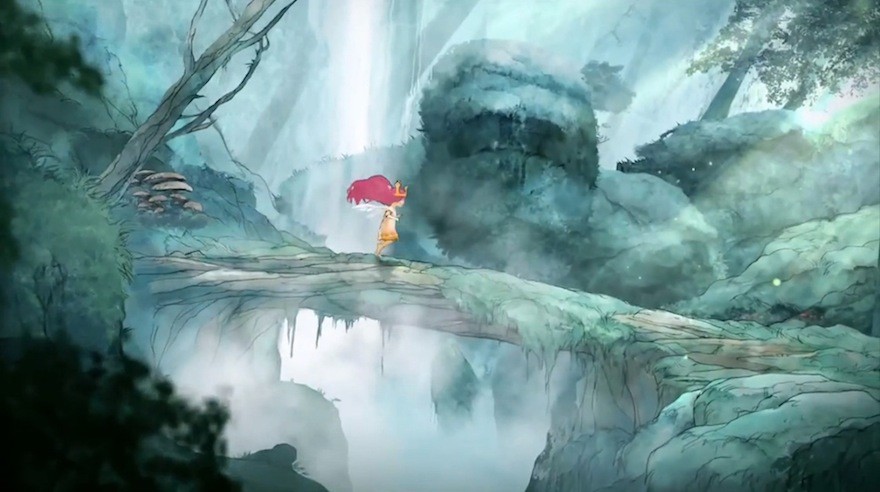 by Jason Johnson
The thing I took away from my interview with the Child of Light people is that the game is really, really pretty, almost too pretty for a JRPG. It is for the record far more painterly than any of those pinched, pixel-y bards and good-hearted witches that populated the genre during its heyday of the 90s. Those games had gorgeous concept art, but when those concepts were rendered in pixels they often get pretty damn ugly.

“What if you took the cover of Final Fantasy 6 and made it so we could play on the artwork from the cover?” Patrick Plourde, the game’s creative director, who worked on the far-more-macho Far Cry 3 previously, tells me, explaining that how when he was a kid he thought that is the way things would be. Instead, polygons happened, and the JPRG refused to die but cloistered itself away.

“But the idea stayed with me,” he says, sitting in a white pod-shaped swivel chair, though I had suggested beanbags. He looked relaxed, spoke with a French accent, hadn’t shaved. “I wished it would be more like the concept art and just use that,” he says, convinced that there’s no reason in this day and age for there to be a difference. He boasted as he leaned forward that the photographs of the game really look like paintings, and later name-dropped some inspirational JRPGs: Valkyrie Profile, Ogre Battle 64 (his all-time favorite), Vanillaware’s games.

Just one problem. Child of Light is a JRPG at heart, but not in geography. It’s made at Ubisoft. He hails from Montreal, not Japan. He says it feels weird that the game is releasing across the Pacific in the motherland of JRPGs, being that he’s not Japanese. But that’s not a disqualifier. The man bleeds JRPGs. “10 years ago I remember crying when they announced the Dreamcast, which is a really silly thing to do, but Phantasy Star wasn’t even out yet,” he says.

“If the game is received well in Japan it will be a great honor,” he says. He seems to be hoping that the great Yasumi Matsuno, (creator of Ogre Battle and Final Fantasy Tactics) will be impressed, saying that he’s in no way in competition with him, that he’s not his contemporary. We then cut the interview short as he rushed off to catch the talk Yu Suzuki was giving on Shenmue.