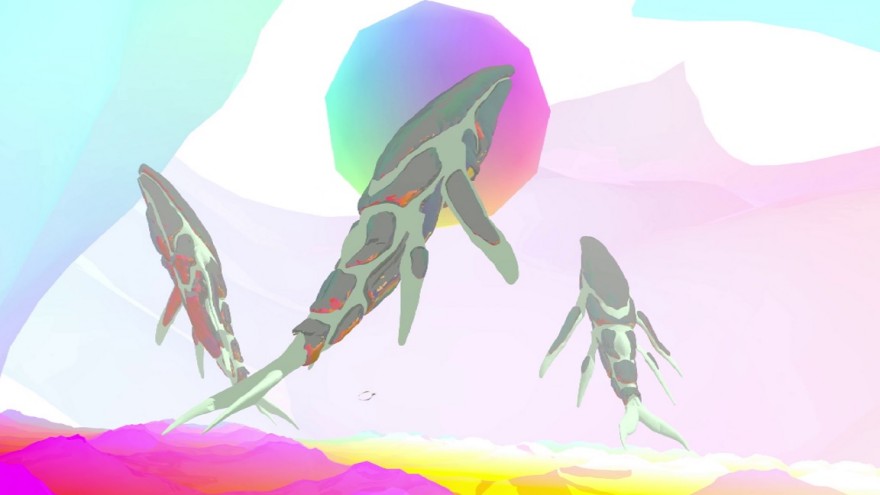 As far as I can tell, Indiana-based “creative director” Jeron Braxton is the prodigal son of Flying Lotus. “My goal is to lead the world into balance and harmony via the universal language of art,” Braxton says. He aims to achieve this through a mix of brightly colored computer art and modern instrumental hip-hop, coalesced into an ephemeral slice of hallucinogen-enhanced heaven.

Browse through his animated videos and you’ll fly over purple mountain landscapes squirming like an angry biblical ocean. You can watch as sacral realms of spheres orbit slowly to a chill beat, and abstract biomechanical shapes blossom like spring daffodils. It’s all so very oneiric, meditative; the kind of videos you’d expect to see “Am I high?” posted like an unwritten ritual in every single response.

scenes of space whales dancing in unison around multi-colored orbs

Braxton’s space funk slides down the cerebral cortex smoothly. Even if without recognition at this point, he’s proven that he excels at mixing chillwave with operatic visual displays of mind-expanding prestige. But it seems he’s not complacent, and is looking to push his art out further. This is why his latest project is a videogame called ChildGod996, which is “the story of a god exploring its past lives in order to find its self”.

To save you some heartache, let me start out by saying that the videogame parts of ChildGod996 lack the providence of Braxton’s other work. You can feel what he was going for but the result is frustrating platform-to-platform jumping, and confusing action-based sections. He does right by not having any fail states so that the music goes uninterrupted but for the game’s duration (if you can last it all) you’ll probably be thinking how much more you’d enjoy each scene if it were realized as one of Braxton’s videos.

That said, it does have its moments. A third-person shooter style section involves zooming through landscapes populated by rising giants. Most of the time you won’t know what’s happening or what’s expected of you, but it doesn’t matter, you can simply enjoy the view.

Undoubtedly the best gift that ChildGod996 gives us is its magical opening animated sequence that serves as your entrance into the pink cerebral liquid of this beautiful alien god’s mind. You can watch it in the embedded video above. It’s Braxton at his best: scenes of space whales dancing in unison around multi-colored orbs with accompanying light beats and synths that sound like heavenly choirs.

To be honest, it’s probably best to just watch the opening sequence and imagine the game that comes after it, rather than playing it. Still, with all of ChildGod996‘s problems, it serves as a stepping stone for Braxton. Who knows—in months or years he could be producing videogames that match the quality of the rest of his art. Now that would be something.