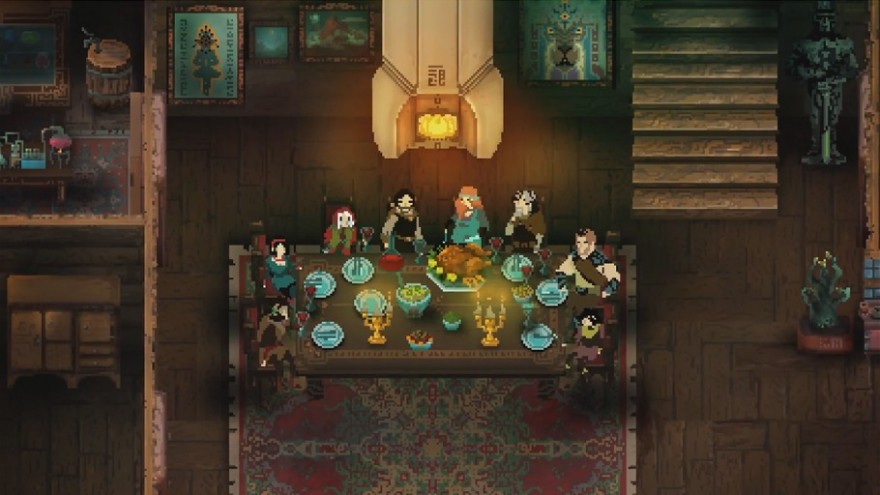 In October Children of Morta released a trailer that looked like a blend of Dutch impressionist painting and metal dark-fantasy pixel art. They’ve recently launched a Kickstarter, so we asked Dead Mage studio’s team coach, Amir Fassihi, to give us more insight into the game’s development.

Aside from luscious aesthetics, Children of Morta also promises to finally bring narrative to the roguelike. Amir says that while all the team members love roguelikes as well as story-driven campaigns for their respective strengths, “Most roguelikes lack the feeling of a connected narrative, while most linear campaign games lack the never ending excitement and surprise of roguelikes.”

Which is why Children of Morta aims for a mixed model approach, with one overarching primary storyline that merges with FTL-inspired “procedural narrative events” that randomly come up throughout your journey. As you hack n’ slash across the procedurally generated dungeon levels, unique opportunities arise that allow the player to explore aspects of Morta’s mythology, culture, and history at greater length.

While the lands of Morta are usually a calm and peaceful place, one fateful event plunges them into a hostile darkness filled with corrupted creatures. When the danger befalls Mount Morta, the symbol and source of life for surrounding villages, the ancient guardian family sworn to protect the mountain must root out the disturbance. The Bergsons (reminiscent of certain Starks from GoT) fight off evil by coming together as a family and being one with nature.

The Bergsons’ skills span across a wide scope of badassry.

While this fantastical world shares many qualities with our own, the people of Morta foster their own unique history, culture, and mythology. “They stand for many principles, living a very simple and highly emotional life,” Amir says. “Family is everything to them, which means they’re serious about tradition and inherited culture.”

Each family member possesses their own set of abilities and specialties. Together, the Bergsons’ skills span across a wide scope of badassry, from martial arts, to magic, to weapon-making. As a tribe dedicated to nature, the family cherishes their relationship with the animals of Morta. In fact, if you play your cards right, those animals can even join your dungeon-crawling party as a companion (anyone know if direwolves are any good at roguelikes?)

Amir admits that each member of the Dead Mage team harbors a favorite Bergson, his being the passionate named daughter Linda. “As the creative type of the family, she’s an expert in music and handles her bow very artistically. She’s the most delicate and charming thing in all the lands of Morta when she plays her violin, but can become a lethal beauty the instant a possessed creature approaches her and she pulls out the strings of her bow.”

Of course, no tribal guardian family is complete without its highly respected yet slightly crazy elder. Gradma Margaret, who serves as a powerful alchemist in the family of badasses, also upholds the Bergsons oldest and oddest traditions. One such tradition, Amir explains, involves consuming an herb known as Mithrana. “Some think it possesses psychedelic effects. Others think its parsley.”

No tribal guardian family is complete without its highly respected yet slightly crazy elder.

Yet, despite any doubts they may harbor, every time the Hall of Gods is cloaked in a thick fog, each family member follows Grandma Margaret’s orders and sits on a rocking chair while consuming Mithrana. “She’s done this so many times that the family has stopped wondering why and just wholeheartedly accepts it as part of their rituals. She says it keeps the Gods from cursing them. No one has ever skipped the tradition to verify, but you might be different!”

As a game heavily inspired by Hayao Miyazaki, while also pulling from Greek, Japanese, and Persian mythology, Children of Morta‘s world brings the legendary to the endearingly relatable. The epicness acts more like a backdrop, setting up conflict and scale. But the game’s true heart lies in the concept of family, and saving the world one hectic family gathering at a time.

Let’s just hope it works out better for the Bergsons than it did for the Starks.

Children of Morta will be available PC, Mac, and Linux for $15 and expects an October 2015 release date. If they reach their stretch goals, Dead Mage is also promising to bring it to the PS4 and Playstation Vita.