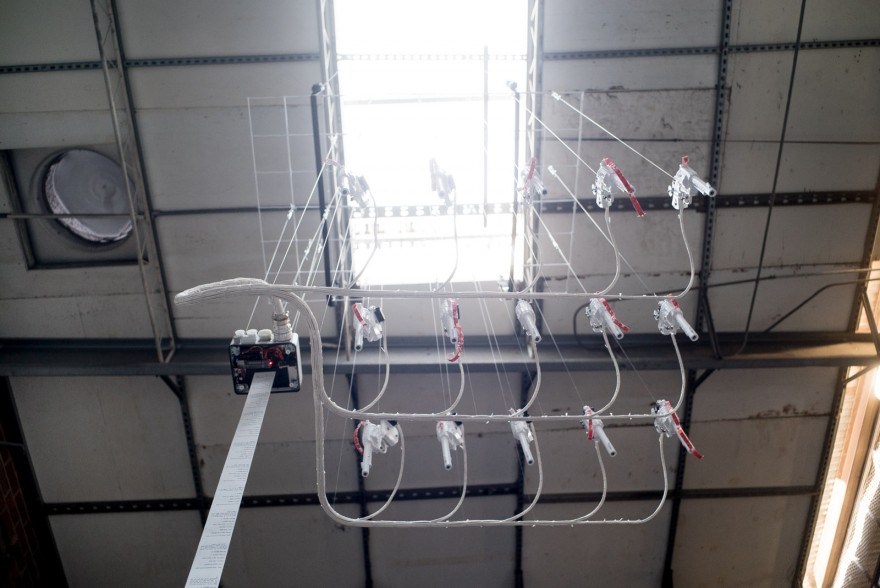 “This time based work accesses a public database on U.S. military drone strikes,” Moore writes on his website. “When a drone strike occurs, the machine activates, and fires a children’s toy cap gun for every death that results.” Since drone warfare is cloaked in secrecy, Artificial Killing Machine cannot simply rely on voluntarily disclosed government data. Instead, Moore used The Bureau of Investigative Journalism’s “Drone War” dataset, which aims to offer a complete accounting of strikes in Pakistan, Yemen, and Somalia. In case drone warfare didn’t treat human life—or at least some lives— as cheap, the details of each strike are printed out using a retail-style receipt printer. The receipts pile up on the floor, like scraps waiting to be swept away.

How do you imagine very real people?

A chair sits beneath the installation. Any attendee can sit in it and watch the murderous edifice at work. Or, as Moore puts it, the viewer is invited to “sit in the chair and experience the imagined existential risk.” This raises two questions: Who is at risk here and what exactly are we trying to imagine?

The existential risk, as the Bureau of Investigative Journalism’s research attests, is definitely not imagined if you happen to live in Pakistan, Yemen, or Somalia. Artificial Killing Machine imagines these deaths, but only in the sense that it makes them more tangible. There is, of course, the other side of the coin. “Drone operators,” according to an Air Force study cited by Matthew Power in GQ, “[suffer] from the same levels of depression, anxiety, PTSD, alcohol abuse, and suicidal ideation as traditional combat aircrews.” Drones have transformed warfare into remote, menial work, a phenomenon Paolo Pedercini explores in his game Unmanned, but the existential risk remains.

As databases of drone strikes grow, so does the challenge of understanding what all those data points really mean: people, places, lives, dreams, death. How do you imagine very real people? This is one of the moral and practical challenges of conducting drone warfare, but it is also a challenge faced by citizens who merely wish to understand it. On their own, traditional infographics may not be enough.

Subalekha Udayasankar has cited an interactive graphic about drone strikes in Pakistan as part of the inspiration for her card game about drone warfare, Bycatch. Indeed, Bycatch goes beyond the lists of deaths and tries to understand the choices that led to that point. In a similar fashion, Artificial Killing Machine, uses gunfire and receipts to add immediacy—if not context—to killings on the other side of the world. Artificial Killing Machine, like Bycatch, is a high concept form of data visualization. When the datum in question is a deceased human, this should be the bare minimum standard for representation.