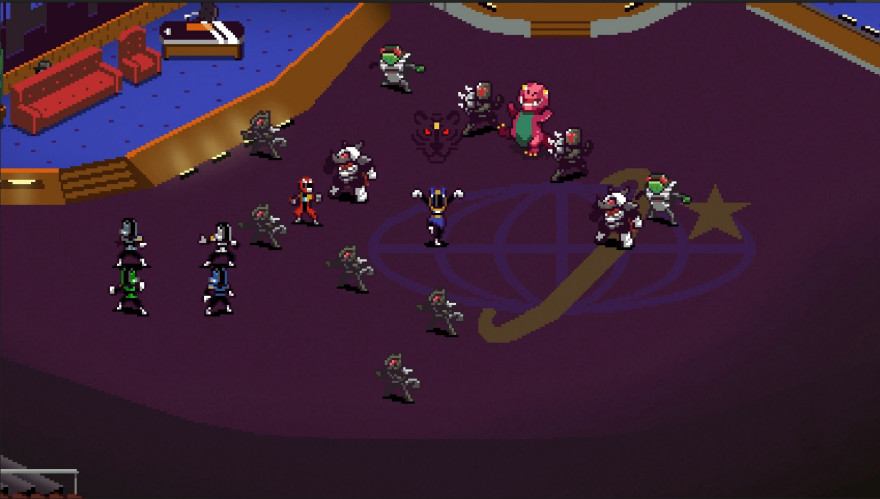 For the better part of three years I would come home every day from school and sit in front of the television, inhaling popcorn and watching the exploits of five (eventually six) impossibly-cool teenagers as they protected the world from a gang of life-sized puppets. To say that I loved the Power Rangers would be an understatement: I owned Blue Ranger sneakers that buckled together with Velcro; played with stiff-armed action figures whose heads rotated between teen and ranger. The one time I got in trouble on the kindergarten playground was when a group of friends and I pretended to be the Rangers; our teacher called our wild, ineffective flailing “too violent.” If this is all a little overly nostalgic, well, so is Chroma Squad. “Inspired by Saban’s Power Rangers” states the tagline. The nostalgia, it would seem, was never closely hidden. If anything, it’s out in full force.

The story is thus: a gang of five Power-Ranger-but-not actors, discontent with the leadership of their current director, set out to form their own studio: my own studio. Pick a name and a cast, and discover a world that blends meme-based dialogue with villains based on Lady Gaga and frank discussions about the impact of a female-cast damsel-in-distress, regardless of honorable or correct intentions. Eventually the plot escalates into true world-saving complete with its own giant talking brain-in-a-vat, as I work to improve my team’s costumes from cardboard to eventual alien materials, from prop swords to the real deal.

It’s charming at first: each episode is a TV-crew flanked level of grid-based, tactical combat. Order custom-colored rangers around the battlefield, dispatch costumed foes, and cater to a growing fanbase with specific goals such as defeating a certain amount of enemies in a given turn, or keeping everybody above 50% health for the duration of the mission.

If the game as a whole is a love-letter to the tokusatsu/Sentai genres, the combat seems thrilled to paint itself the color of Final Fantasy Tactics and Fire Emblem, all the while lacking a specific depth that made those games technically rewarding. At first there’s no reason to mind as I learned the ins and outs of this colorful, stylish world. But even though each role has its own strength, none of them really seem to have any weaknesses. At any given time they can all be used as brawlers, setting out on their own and demolishing enemies solo, or occasionally with the help of a teamwork-attack, which is the closest the game comes to any flanking mechanic. It’s disappointing that the enemies themselves don’t seem to possess this mechanic, and only the boss enemies show off the occasional special attack. But even then, the response is still the same: shake it off, move back next to an enemy, and punch, or axe, or sword.

The boss enemies are, on surface, a treat: there’s a bipedal bear who tries to dance my team to death; a traffic-light-themed wizard; a maniacal tree-man who ambushes me during a picnic. But they all, ultimately, feel identical, none posing any larger threat that might require any unusual tactics besides the occasional heal. By the time fights begin to show any sense of epic scale, I’m nearing the end of the campaign, and the difficulty and excitement comes not from new types of enemies, but the sheer number of the same.

The game shines best in these segments: I’m using specific powers to carefully coax foes into easily-attackable arrangements, carefully weighing the order in which I do things. If only every episode were like this, I think to myself as I lasso an enemy next to another one with the lead-ranger before flipping my damage-dealer into the middle of the fray with the help of the acrobatic rogue. The damage-dealer dispatches numerous baddies with one rotating kick, and I feel triumphant—I feel my childhood playground.

It’s the same sensation as I tinker with gear and stats in-between each episode: crafting or buying new gear and swapping abilities feels like setting my tiny toys up on my bedroom floor before a giant pretend battle. I seek out more cash for the explicit purpose of making my team’s uniforms match, caring less that their stats are min-maxed and more that they’re using role-appropriate weapons. Emails pour in with fourth-wall breaking glee, my canned responses gaining me extra fans or equipment. I upgrade my studio’s first-aid kit so that my team gets a health-bonus each episode, while hiring a cleaning crew merits more crafting drops.

Chroma Squad manages to turn even the mundane aspects of its wacky premise into enjoyable tasks, but at a certain point it becomes clear that the meat of the game is insubstantial, wearing down the player with plot lines and mechanics it seemingly insists are “fun.” Probably the worst offenders of this are the episode-ending Mech-battles, which condense massive, Kaiju-inspired, city-leveling brawls into a mini-game where you press buttons, gambling your damaging-combo against decreasing hit percentages. Miss a combo or choose to defend and you are thrust into part two of the mini-game, where a meter shoots across a bar in the same way that a player in Madden kicks a football: click the button at the right time and take solace in knowing that you are one step closer to getting back to the actual game.

rather than sitting in awe of teenagers, we’re playing as adults

I recently went back and watched some of those original Mighty Morphin Power Rangers episodes, and, to probably nobody’s surprise, they have not aged well. The Green Ranger is introduced at a martial arts tournament by performing the same jumping kick five times in a row. Later in the series he challenges the Red Ranger by walking closer to him and playing his dagger like a bullet-deflecting pan-flute as though he were practicing for a recital on a Sunday afternoon. Menacing doesn’t seem to be in the show’s vocabulary, despite the parental and teacher complaints that might have suggested otherwise.

What’s endearing about Chroma Squad is that it captures how silly it all was: an absurd, slapstick plot with actual, devastating conclusions if evil ever managed to succeed. But here it’s an updated fantasy for those children who became old: rather than sitting in awe of teenagers, we’re playing as adults who set out for their dream jobs and end up working to save the Earth. It’s a dedicated, stylish tribute to the series that inspired it, but what’s lacking is the realization of something more substantial. Chroma Squad is aware that its audience has grown up; it doesn’t seem aware that its audience has matured.