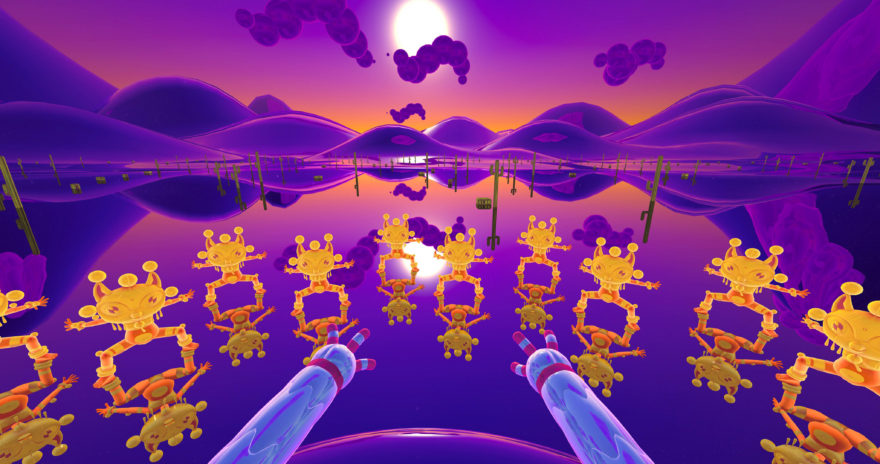 Most virtual reality music videos feel the same. They’re all impressive on a technical level, rotating 360-degrees so viewers can take in all their surroundings. Yet little of them inject the most integral feature: interactivity. That is, except for Tyler Hurd, an animator known for injecting life into those typically stagnant virtual reality music videos and making them colorful, fun, and most of all—somewhat playable like a game. At the Tribeca Film Festival last year, the animator unleashed “Old Friend,” a zany, psychedelic dance party where the player shimmied alongside a cartoonish conductor. In Hurd’s follow-up, a collaboration with Viacom NEXT, interactivity roots itself elsewhere: alongside shiny kitty cats and chrome everything.

“Chocolate,” the new music video from Hurd, features (and is based on) a track from electronic music producer Giraffage’s 2014 EP No Reason. It recently saw its premiere at the Sundance Film Festival during the 2017 New Frontier showcase. The music video is unlike the projects from Hurd’s past, cementing itself fully as an effervescent exploration of joy, much like the song it grabs its namesake from. “Chocolate” is another experiment with interactivity for Hurd as well, from a speakerphone-like kitten cannon to swaying along with the pulsing beat—the viewer is encouraged to move, not just watch.

While Hurd has made colorful videos in the past, “Chocolate” showcases a change in direction visually, away from his typical character design sensibilities. “Chocolate aims to extract childlike giddy feelings of awe and wonder from the participant,” said Hurd in a press release. “You know, like when you look at sparkly shiny things and cute ‘lil kitties made of reflective metal.”

You can watch a teaser for “Chocolate” below, and the project will release publicly within the first half of 2017.