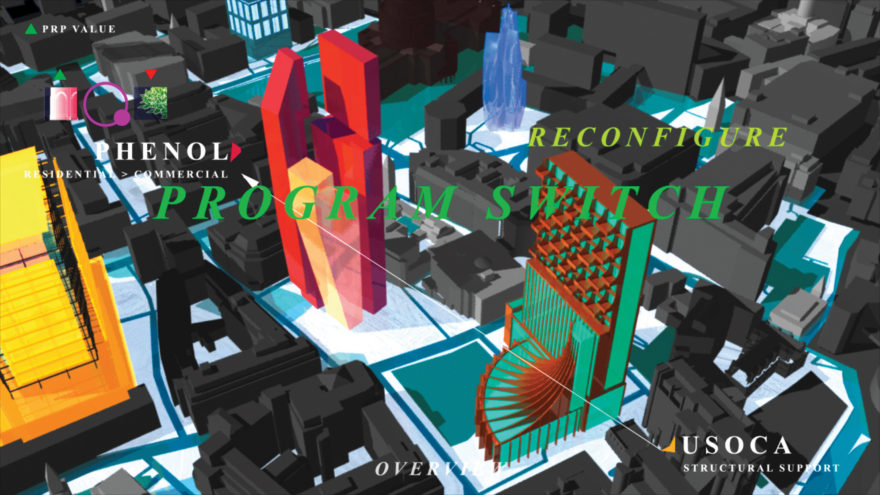 Urban planning is a rules-based game. Participants in the planning process have goals they wish to accomplish and constraints governing how their objectives can be achieved.

Nowhere is this more the case than in London, where a complex series of regulations and protected sightlines have conspired to create ungainly clusters of misshapen towers. (The Shard, anyone?) Architects are already playing the planning game, but they are playing it clumsily. That, in effect, was the conclusion the Guardian’s Oliver Wainwright and Monica Ulmanu came to in their interactive visualization of the city’s future skyline (come to think of it, that also looked a bit gamelike):

With all these projects coming at once (bringing over half a million sq m of floorspace) Richards realises clearer guiding principles must finally be set out. For the first time, he has begun to model what all the City’s constraints actually look like in 3D, developing a kind of “jelly mould” for all future developments. He began by drawing a mountain-shaped dome over the cluster, then went around the distant viewing points one by one, “chipping away at the foothills”.

Within this general lumpy mould – which has the look of a mauled blancmange from some angles – he has started slicing away more specific areas. He talks of “ski slopes” swooping down towards St Paul’s and the Tower of London, how buildings must “ramp up” to the peak of the cluster, and how Gotham City is the “bookend” to the east, beyond which it’s unlikely more towers will be allowed (within the City limits at least).

The system that Wainwright and Ulmanu describe, however, is still somewhat piecemeal. After years of fumbling around with vague guidance, the journalists note that city officials, developers, and architects alike are still feeling their way around planning issues.

Cilvia, a speculative planning videogame by Royal College of Art graduate student Johnny Lui, imagines a future wherein the planning game is formalized into a system that all parties can simultaneously use—an urban MMORPG of sorts. The system has two main functions: it turns all the rules that architects must accommodate into a playable system, thereby eliminating some trial-and-error, and it creates a collaborative interface wherein lots of creators can work on the city at the same time. The former is, in a narrow sense, the more useful function. The latter, however, has a greater potential to improve citsyscapes through game mechanics.


The main problem with the current city-plan-as-a-game approach to planning is that it looks at individual buildings in something of a vacuum. If you protect sightlines and whatnot, your building is broadly compliant. A cluster of compliant buildings, however, is not guaranteed to work well together. (That is a nicer way of saying the City of London is an architectural morass.) But this is all to be expected when rules are set up to protect the past more than they are to meant to ensure a harmonious present.

Instead of splitting up these two aspects of planning, Cilvia has the potential to bring them all together and address some of the planning horrors that created London’s abominable clusters. While one might wish to challenge questionable planning regulations more forthrightly, Cilvia is a system that makes the best of an imperfect situation. This approach to architectural gaming—as opposed to the glitz of Bjarke Ingel’s “our buildings’ envelopes are shaped by restrictions”-routine—is a potential way forward for other cities. If planning systems have to be gamed, they might as well be gamed for good.