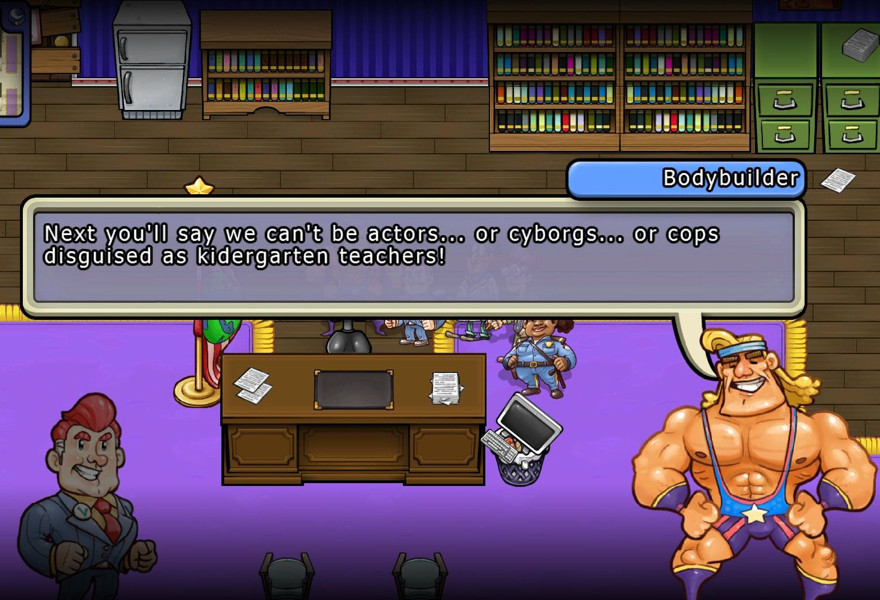 The stereotypical role-playing game casts the player as the center of a universe, tasked with a quest that, aside from a handle of major characters, seems unsurmountable. As the brooding spikey-haired steampunk ultimate soldier clone, you come across various townspeople, all whom offer snippets of support, bullet points revolving around your meta relevance.

Citizens of Earth at once both exemplifies and deconstructs these RPG tropes. The game begins with you, the player, the Vice President of the World, awakened by your mother, who  then immediately joins your party. Your goofy brother also joins—he works for the postal service, and can order items on the fly. As you exit the house, your immediate task is to battle protesters looking to scorn the Vice President’s good name. Questing falls into the shamelessly tried and true as you collect characters, level up, and raid empty homes, but the satirical jabs to the genre aren’t strong enough to distract from a monotonous structure.

A greater conspiracy is eventually revealed, none to the surprise of the characters, who all seem pretty cool with the notion of being in a weird Japanese RPG. After the prologue, you and your team of averages warp to an experimental coffee factory where coffee pot robots have mutated with baristas and managers as if Dr. Frankenstein stopped by Mr. Roger’s Neighborhood before working on his monster.

You can recruit almost any person in town, from the baker to the school teacher to the conspiracy nut hiding in the police station. Each recruited character has a “talent” that will assist you in and out of battle, i.e. changing the difficulty, baking rare items, a list of secret bosses, etc. From early on, the player can choose to double or triple money and experience gained from battle, or likewise halve the spoils to up the challenge. These customizations are welcome in a game that serves as something of a throwback, allowing those that have been around the block a few times to break the game a bit and mess around.

Citizens of Earth could’ve well been made in an early aughts RPG-maker, though it has been polished to a Candyland-esque sheen, resulting in a sleek, shiny cartoon—I want to peel characters off the screen and stick them on my trapper keeper. Enemies such as Telefawn—half fawn, half telephone—and a bear that is also a honey pot  show a knotty, developed sense of humor, tucked into every corner of the game. I rarely read the in-game encyclopedias of monsters and items, but the writing behind Citizens of Earth is endearingly satirical, showcasing a ripe amount of imagination that went into creating the world. Think South Park without the crass.

Although it suffers from the dated standards of structure and action—acting more as an imitation of what we might remember of the SNES-era than a succession—Citizens of Earth flourishes when it embraces its own silliness.  The drive to see more could be the most important facet of any game, and Citizens of Earth delightfully enables the typical stereotypes of reality and genre and colors them with the zany, fantastical, and frivolous.