If you wanted to find a small, distilled encapsulation of the Civilization series of grand-scale strategy games, you need go no farther than the musical trailer for Civilization IV’s (2005) original game and its theme song, “Baba Yetu.” The trailer depicts—as only Civilization can—the vast scope of human history, from the construction of the pyramids to the eventual exploration of Alpha Centauri. The song itself was the first piece of videogame music to win a Grammy. But even as the video portrays Civilization’s ambitions, it also demonstrates the series’ handicaps—namely, a kind of Western parochialism through which the series understands and presents various… well, civilizations.

The trailer echoes 19th-century philosopher Georg Hegel’s comment about how “World History travels from East to West” as it bounces from Rhodes to Rome to North America. For it is the Western narrative—specifically, the American one—that apparently represents the arc of world history. The trailer’s initial moments are set in the Eastern Mediterranean, while the penultimate beat of the narrative focuses on the American Revolution and the Emancipation Proclamation as emblematic of the history of the world. The lyrics of “Baba Yetu” function similarly: it is simply the Our Father prayer in Swahili, an example of the kind of ecumenicism that sees Christianity as the best representative of the sublime.

Civilization has always been marked by a well-meaning humanism

Hence the difficulty with CivilizationEDU, a version of Civilization V (2010) that will be used in classrooms to teach high-school students about history and the way in which geography, economics, and technological development affect that history. It’s impossible to critique the actual piece of edutainment as little beyond a general outline of its purpose has been revealed. But Civilization itself is a well-known formula, with the sixth iteration set for release in October, and its familiarity can only lead to concern over how the game’s systems will actually present history.

On the one hand, Civilization has always been marked by a well-meaning humanism. Every iteration of the base game and its expansions have tried to incorporate a wider and wider swathe of various cultures and civilizations. Civilization V is a good example of this aspiration: the base game had series stalwarts like the Aztecs or America, but also included Siam for the first time; the expansion Gods and Kings brought with it the ability to found a religion, or to have spies named for the various cultures they represent (James is a possible English spy, while Ur-zigurumaš is a possible Babylonian spy); Brave New World introduced the possibility of various works of visual art, writing, and music, meaning your Mayan museum could have Breughel’s “Tower of Babel” (circa 1563) and Zhang Zeduan’s “Along the River During the Qingming Festival” (circa 11th/12th century) in the same building—though the list of possible works neatly cuts off when we leave the public domain. 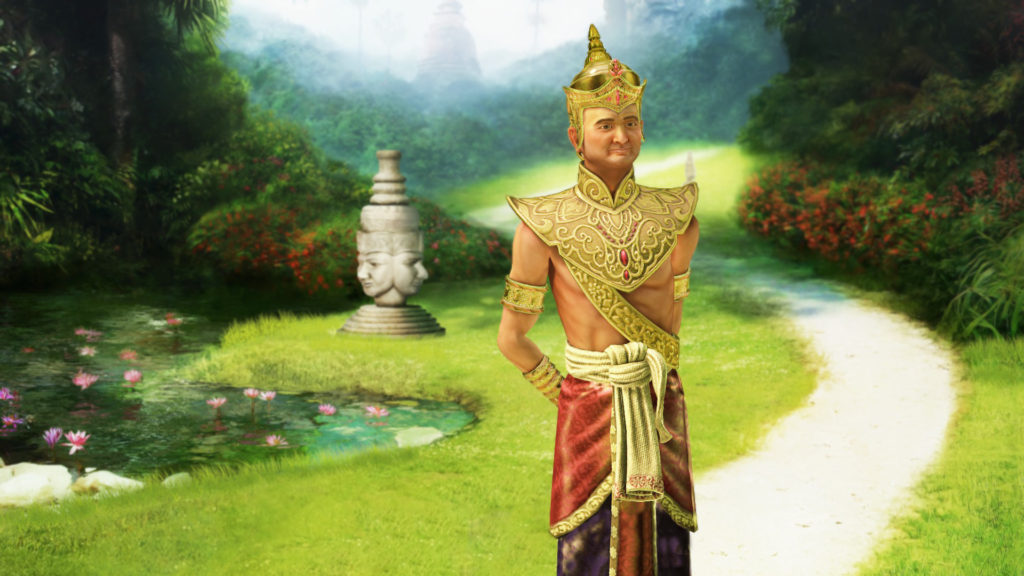 This interest has led to an education of some sorts by introducing audiences to parts of world history that they likely would never have encountered otherwise. If you Google Image search Mansa Musa—an emperor of the Mali Empire during the first half of the 14th century, and perhaps the wealthiest man in human history—among the first few images that pop up is his leader portrait in Civilization IV. Other civilizations include the West African Songhai, or the Inca, or Native American tribes like the Shoshone. In short, Civilization has always tried to show and tell of the sheer variety of human experience through various representations of human polities, across the globe and down the millennia. Added to this base presentation are the variety of civilizations available as mods to the base game—which include Canada, Afghanistan, the Maori, and others—and Civilization can present itself as a broad, open-ended celebration of human diversity.

On the other hand, this openness is belied by the way in which these various civilizations are presented as essentially Western in form and function. Take, for example, the technology tree, which presents scientific development as a linear process: chemistry leads to fertilizer leads to dynamite, and so on. But this structure misrepresents the actual history of science in favor of a modern, idealized form that has existed only relatively recently. First off, it’s far too neat, treating different discoveries like Lego blocks that build on top of each other. The reality was much more messy. When was chemistry actually ‘invented’? It certainly wasn’t during the Renaissance Era—the word chemistry comes from alchemy, which in turn comes from the Arabic al-kimiya, which in turn came from the Greek khemeioa, which may have come from the Ancient Egyptian name for their land: Khemet, “the land of black earth.”

The reality was much more messy

It would be fair to say that chemistry, as we moderns understand it, found its beginnings in the work of 17th-century moralist-turned-scientist Sir Robert Boyle, but for the fact that we cannot say the medieval alchemists who discovered how to distil pure alcohol or how to make aqua regia in order to dissolve pure gold were not doing chemistry. Civilization V’s built-in encyclopaedia states that it is 18th-century chemist Antoine Lavoisier who may be properly called the father of chemistry, but this is to ignore that Lavoisier relied upon the work that Boyle did, which in turn relied upon the work that contemporary alchemists like George Starkey (alias Philalethes) did. Indeed, scholars of the early modern era—such as William Newman and Lawrence Principe—use the term “chymistry” to name this messy moment when what we would recognize as chemistry began its slow evolution from alchemy. In short, the history of chemistry is a messy, complicated, and confusing narrative utterly unrepresented by its place in the Civilization tech tree.

In the same vein, the tech tree presents a kind of vision of science that is just as historically untrue. We are used to the idea that science is working, purposively, towards a kind of absolute truth—the grand, unified theory of everything that describes material reality perfectly. Concomitant with this conception is a process of continual correction and improvement: Isaac Newton’s theories of gravitations were correct, but superseded by Albert Einstein’s more correct model. Put another way, every step in the scientific ladder is succeeded by a more perfect one. Nevertheless, the history of science is littered with dead ends. The caloric theory of heat—wherein heat was an actual physical substance—is one example. Phrenology was another. Female Hysteria is a good example of a relatively recent medical theory that was often just a diagnosis for women who could not (or would not) fit within the conventional models of 19th-century femininity. Against the Civilization model of science—where every development is true, perfect, and a step onwards towards the end of the tech tree—stand these fundamentally mistaken theories. Even to describe them as dead ends is to presume a maze where there is a “correct” path that leads to an exit or an end, when all we actually have is the maze itself. One wonders what ‘dead ends’ we unknowingly find ourselves in now. 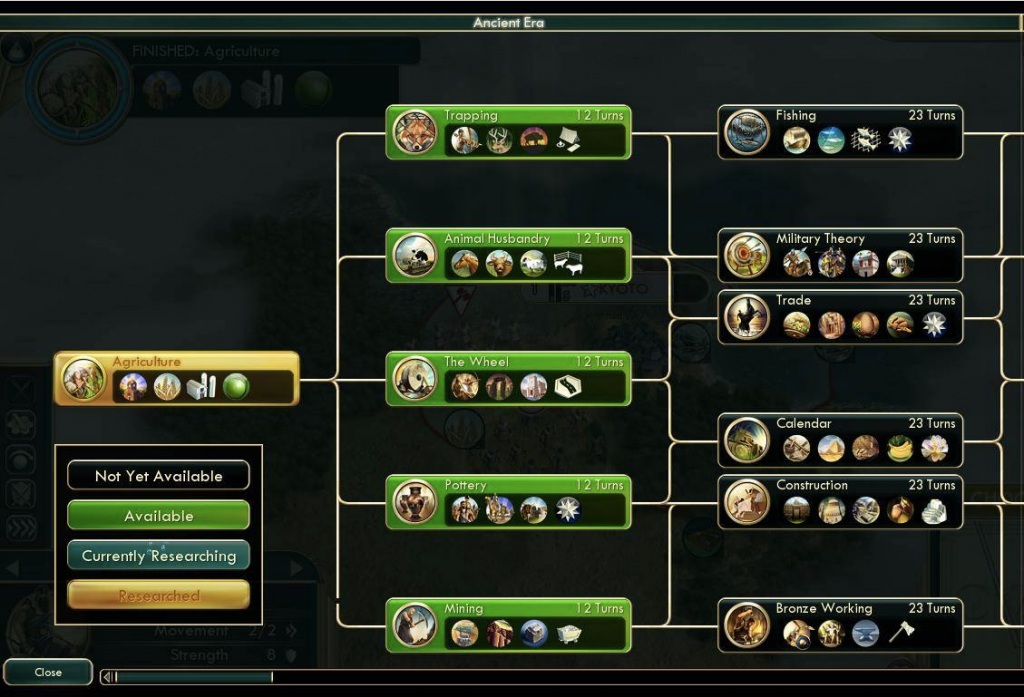 The same kind of criticisms can be applied to the way Civilization presents warfare or the development of cities. The image of armies butting heads with individual units being wiped out by volleys of arrows or musket fire works as an abstraction of the kind of warfare used by Westerners—Cannae or Agincourt is neatly represented by Carthaginian elephants or English longbowman. But the more ritualized forms of combat present in other world cultures are absent. There are no Aztec flower wars, where the purpose of combat was the acquisition of captives for sacrifice. There are no analogues for the kind of ritualized battles described in Nigerian novelist Chinua Achebe’s Things Fall Apart (1958). Similarly, the development of cities proceeds along a European vision: Early on, libraries and granaries are built. More complex buildings (opera houses, armouries) soon follow. This system makes intuitive sense for, say, England, but cultures that did not have cities as we understand them, like the Iroquois, are lumped into the same model.

Civilization is no less an abstraction than chess, and should not be criticized for that. But chess is abstract enough to permit few misconceptions about the actual, matter-of-fact nature of battle. Civilization, with its well-meaning sense of inclusion and its desire to present as wide a view of human… well, civilization as possible, is in a similar situation. Its purpose, as a game, is not to recreate history—how else can you explain the Babylonian capture of the city of Washington?—but to delight in it. Nods are given to the game’s models—the Iroquois receive a special longhouse building while the Aztecs’ special ability directly references their flower wars in that they receive culture for every unit they slay—in order to keep with the game’s good-natured interest in specific cultural diversity.

Its purpose, as a game, is not to recreate history

But Civilization as a game is distinct from Civilization as a teaching tool—even if the line between the two is blurred for CivilizationEDU. An educational tool bears a weight that a game does not: in the classroom, accuracy is required for any kind of real usefulness. Thanks to elementary school lessons, we are already stuck with the popular myths that Christopher Columbus sailed the ocean blue to prove that the world was round, or that the trade in spices with China was to disguise the flavor of bad meat. But when we learn the truth of things—that no educated person in the medieval era thought the world was flat, that the spice trade was lucrative because trade in luxury items has always been lucrative—it causes us to reflect on our past and ourselves, and on the essential similarities and on the profound differences. CivilizationEDU bears the risk of similarly warping students’ understanding of history if the basic mode of presentation is left to stand as is. In essence, it risks teaching students that science has always been a monolithic, linear project; that battles are like chess, where pieces are cleanly wiped out by others; that everything is fundamentally reducible to a Western experience.