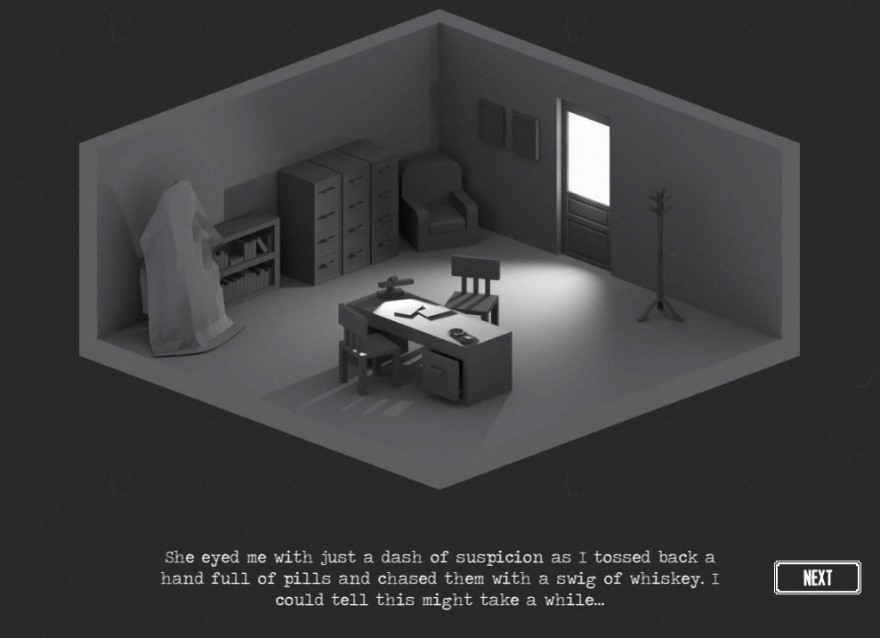 Of course I’m called Jack. Of course I drink whiskey and smoke. Of course she’s the mistress of a rich man who’s suspected of murdering his wife. Of course…

You get the idea. The Monster Inside is film noir by the book (or, um, film). You’re a rundown detective with a homicide to investigate. There’s an obvious femme fatale who appears right at the start, just after you’ve finished staring out of your slatted blinds at the decrepit, smoking city below. It is thoroughly a pastiche of classic noir icons: The Maltese Falcon, Double Indemnity, The Asphalt Jungle. Take your pick.

(As a side note: the game does actually go a slightly different direction than your typical film noir. Slightly.)

But I refuse to let the game’s predictability mark it in any way. I want to handle it with a gloved hand. For The Monster Inside is precious. Each of its chapters takes you to a new scene. All of which are lovingly-crafted dioramas. The iconography of the genre realized as silent grey models with adorable flat-shaded props. The detective’s office. The crime scene in the park. The dimly-lit docks. It’s all here. A tiny treasure.

No actors appear to interrupt the stillness. And even you, the player, are only allowed fleeting moments to investigate a few of the scenes. You click on circled clues as they appear underneath your cursor, triggering another pensive monologue. The rest of the time you’re clicking through text with a typewriter font, listening to the dusty cymbals and sad brass, occasionally making choices in conversation. Mostly, it’s just you and these dioramas.

Square Enix recently realized the virtues of dioramas in its mobile games Hitman GO and Lara Croft GO. As with each of their designed stages, the models communicate a single idea, condensing it all into a single isometric viewpoint. These are cross-sections of much larger designs, chopped down into bite-sized scenes, their single notes offering a satisfying lesson.

In The Monster Inside, instead of teaching new ideas, the dioramas act as 3D backgrounds for you to spill your imagination over. You turn the words you read into ghostly stage play inside your mind. The chiaroscuro adds tone. The hidden spaces beyond the surrounding void is left for you to expand with your own architecture.

You can play and download The Monster Inside on itch.io.