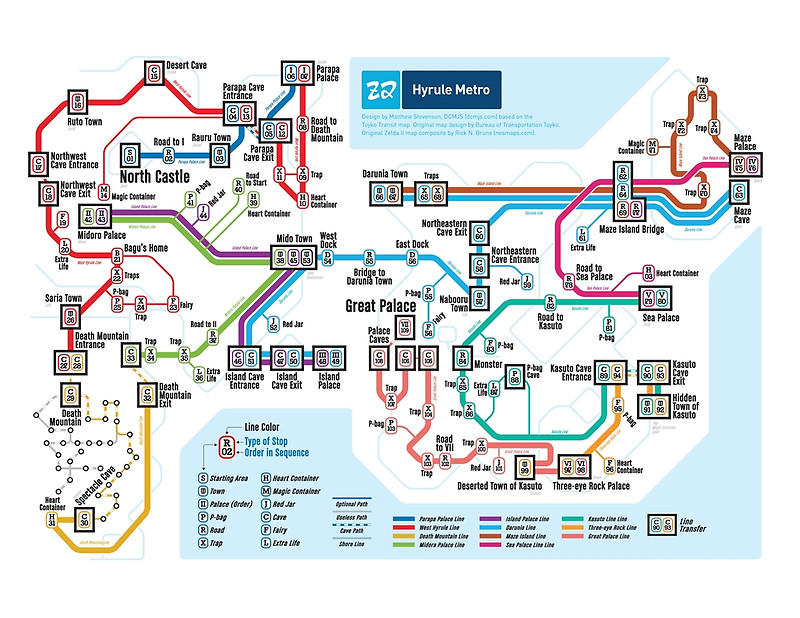 Few moments are more familiar in an old-school dungeon-crawler than the opening of a treasure chest, only to find a dungeon map. But if—for whatever whim of your fancy—you’ve been hoping instead for a subway map to unfold itself from those chests, you’re in luck: graphic designer Matthew Stevenson has created six sprawling “subway” maps, based on his favorite NES games.

revel in these maps’ ability to evoke warm nostalgia

Each map is unique, encompassing the specific visual appeal of the game they seek to compress. The Legend of Zelda (1986) subway map, for example, is intricate and sprawling—based loosely on the London Tube—reminiscent of the hours spent riding through Hyrule Field. The map based on Metroid (1986), however, is blocky and bold in color as though it were an interpretation of Samus’s Power Suit. Stevenson didn’t miss any of the classic heavy hitters; he has also designed subway maps based on Final Fantasy (1987), Dragon Warrior (1986), Maniac Mansion (1987), and Zelda II: The Adventure of Link (1987), all loosely based on real-world subway systems.

What is perhaps most impressive about these designs is how they reimagine entire videogame worlds as simplified one-dimensional spaces, yet retain a strange sense of familiarity: these are the worlds you know and love, only more abstract and sophisticated. One can hang them in their office and revel in these maps’ ability to evoke warm nostalgia for classic Nintendo in a minimalistic way, and perhaps feel inspired to revisit those beloved worlds.

You can see all of Matthew Stevenson’s videogame subway maps over on Red Bubble.