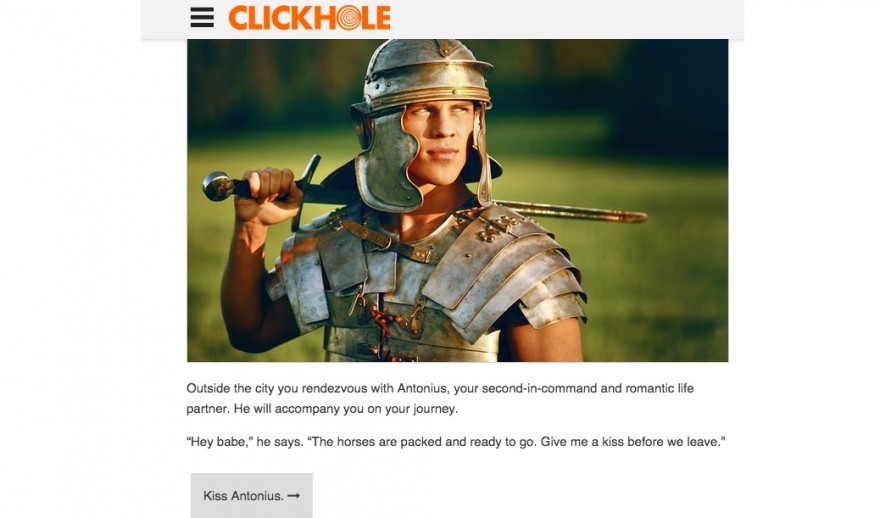 You are a seasoned Roman general in the year 31 AD. Your biceps and eight-pack glisten in the sunlight as the gods smile down upon you and promise bloody victory. Only you and your army stand between the Germanic invaders and your beautiful Roma. So you reach for your battle axe, grab a statue of Romulus and Remus suckling at their wolf-mother’s teat, and kiss your boyfriend, Antonius, hard on the lips.

With Fight For The Glory Of Rome!, parody site Clickhole satirizes the attempts at a ‘choose your own newsgame,’ which many like the BBC have tried to use toward more serious ends. While debates over the marriage between news media and interactivity rage on, one thing remains pretty certain: choose your own adventure newsgames tend to lack a certain… weight when recreating the horrifying realities of something like an unwanted pregnancy. Buzzfeed tries to offset the self-seriousness of the choose your own newsgame in its very own Buzzfeed way, with thrillers such as Can You Survive A Day In The Life Of A House Cat? and Can You Survive This Party As An Introvert?.

But with Fight For The Glory Of Rome!, Clickhole outshines the competition in blinding brilliance. I’m not sure how or why, but it appears Clickhole is one of the only content creators—parody or not—who understand what this bastardized version of a classic videogame genre needs to actually work. Because the key to the choose your own adventure newsgames lies neither in an emotional draw (which is what BBC relies on) nor narcissism (which is what Buzzfeed typically relies on). The heart of the choose your own adventure newsgame lies in immediate and visible consequences to your actions. And, boy, does Fight For The Glory Of Rome deliver on that front in the most delightfully spectacular ways.

For example if the player bristles at the fact that your character turns out to be gay, the game gives you the option to demand a sexy female wife; even though, as FGoR! insists, “this Roman adventure is just as good whether you’re gay or straight. It’s a thrilling tale of blood and conquest, and your sexuality is completely beside the point.” Still want that sexified lady-wife? Well, the game presents you with a middlefinger fail screen and text that reads: “Go fuck yourself, you bigoted fuck. Game over. You lose.” While those seem like some harsh words, they ring with a sort of sweet truth. Just imagine the people insisting on a lady-wife in FGoR! are the same people who argue that all-white high fantasy is “historically accurate.”

Though FGoR! was published before Pride month and last Friday’s historic supreme court decision, Clickhole’s approach to the well-documented homosexuality of ancient Roman armies reads as sincere and from a place of love rather than mockery. Of course, ridiculous things always happen around the relationship. But the love between a man and a man is presented as the furthest thing from ridiculous, especially in a world with intervening gods and random scuffles with squirrels. As the player, you are made a better general by having your love and second in command, Antonius, by your side. He frequently helps you defeat foes, in otherwise impossible battles.

FGoR! shines in everything it sets out to do. As a satire of the choose your own newsgame pseudo-genre, it often leaves the player with cumbersome blocks of information dumps. As a choose your own text adventure, this is a pretty exciting and robust narrative system, all things considered—I mean, at certain times, it even requires checkpoints (which obviously come in the form of impassioned kisses between you and Antonius!). But above all, as a hybrid war epic-bromance-rom-com, this genre-bending tale will engage all walks of people with all sorts of interests.

You can play the ‘clickventure’ Fight For The Glory Of Rome! for free on your browser.