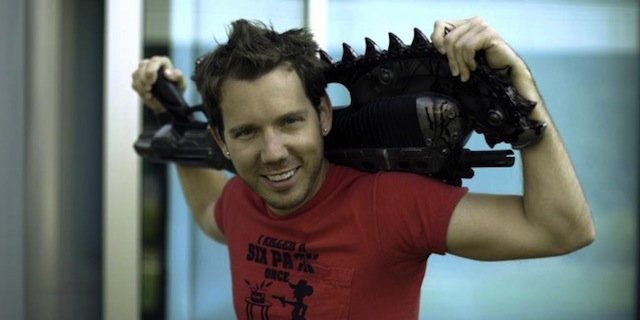 In a splendid interview over at VentureBeat, Cliff Bleszinski, the brains behind the Gears of War series and bosom-bud of Ice-T, broached the all-American topic of football. When asked what games he was currently playing, Cliffy responded, “I’m actually watching football,” going on to say that both his teams, the Saints and the Steelers, were out of the picture for the big game.

Thanks to this great read, we have a much better picture of why “The Cole Train,” the tank of a private who knows how to handle a chainsaw gun, will lapse into a reverie about the gridiron from time to time. It turns out Bleszinski is a big fan of the sport, and has started to think about the connections of videogames to pigskin.

Good all-American football. That’s an interesting thing that we should probably touch base about in regards to game design and things like that. I was raised with … football forced down my throat, and I basically rejected it. I didn’t want anything to do with it. It just felt like this sport that the assholes at school played. [But] ever since a few years ago, when I watched the Saints in the Super Bowl, something started clicking with me. It’s a fascinating thing. It looks simple, but it’s incredibly deep, which is one of the keys, of course, to football.

Cliff continues to mull over the idea of how games can tap into the feelings of territoriality and competitiveness that the brutal sport evokes in its super-fans. He thinks players of videogames should possess a similar sense of devotion.

The thing about football is that it taps into this tribal nature that everybody’s had since the dawn of time. “Fuck those guys! I bleed red!” “Why?” “I don’t know. I was just born here, so fuck those guys!” People go insane for their local teams. . . That’s the key to something I want to consider getting more into in the future, which is creating something that creates that local loyalty on a digital scale. You have your North Carolina versus South Carolina or New York versus Jersey. Can you create those rivalries somehow in a digital space that we’re all hardwired to believe in?

Sports and videogames are kissing cousins after all. Both are rulebound systems and as we explained in our interview with Rogers Redding, a former teacher of molecular physics and the national coordinator for officiating NCAA football.

While Bleszinski doesn’t have any projects in the works currently, he obvious has something on his mind. After having a ton of fun with Beast Mode in Gears 3, we wholeheartedly hope it’s a revival of Mutant League Football!