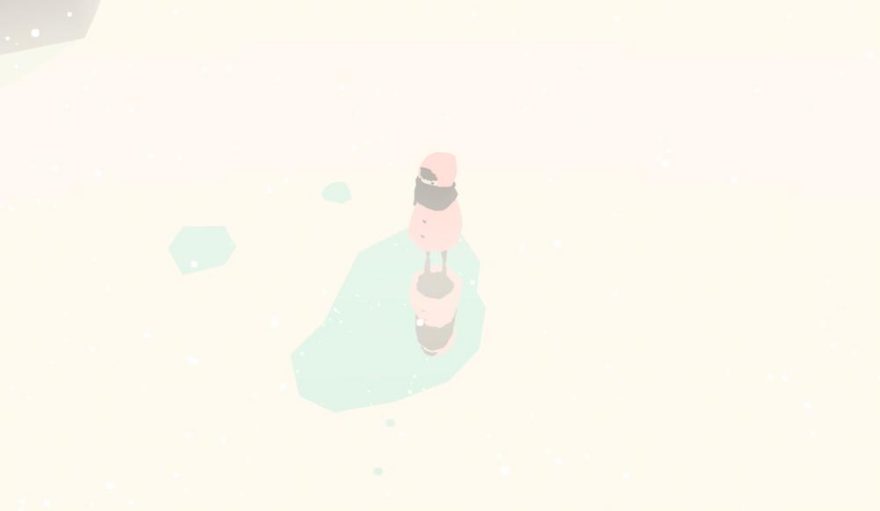 Tobias Zarges wants to experiment with the videogame form and its capacity to be art. This comes natural to him as a student of fine art, design, and music at Kunsthochschule Kassel in Germany.

To this end, he’s working with programmer Moritz Eberl on Close, an upcoming game about exploration and existentialism. It starts you off as a character wrapped up warm in a pink coat and hat, sat on a log in a snow-covered expanse. Press a button and the character will stand up and from there you can wander off in any direction to a dreamy, downbeat electronic tune. At no point does the game pause your journey to explain what it wants you to do—that would actually be counter-intuitive for Zarges.

the question of your purpose in this world

“Instead of offering players an obvious conflict-solution-achievement-scenario, I’m offering a space to reflect and interpret different themes and motives,” Zarges told me. “I want players to explore the game on their own to find out what it is about and what their role is in it. It’s a different kind of quest. It’s not about solving a quest, but about playing the game and finding out what the quest is.”

This hands-off approach could prove risky given that we, as players, are used to being told what to do and how to do it. The absence of these instructions is significant as it should help you to arrive at the question of your purpose in this world. The idea is for you to find that out by interacting with the other characters that inhabit Close‘s world.


On my small playthrough of the early version of Close I came across a number of them: a deer with pink fur that leapt away from me, a penguin-like creature (I think) that skated across a frozen lake, and a man in a brown coat sat in a dejected pose on a bench. There are more to find, I know that, but even these first few characters seemed to have somewhere or something to show me.

It’s possible to interact with these AI-controlled characters, and for them to interact with you, too. The idea in Close is to see which are receptive to your playful invitations, and vice versa. It’s a game about telling a story through play, as Zarges explained: “I wanted to focus on what is unique to games, how games can create a unique experience, rather than using written or spoken word to tell a story.” Play is the language you use to interact with its world and through which its themes should unfold.

Close is currently in early production. The early version is playable on PC but Zarges is aiming to get it on PlayStation 4 and Xbox One in 2017. Find out more on its website.