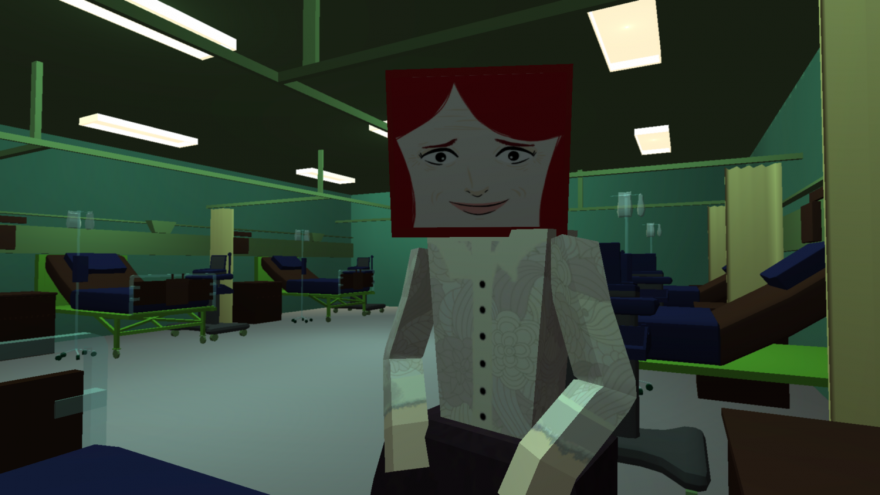 An adult human blinks ten times per minute on average (less during tasks that require concentration such as reading). That’s one blink for every six seconds. Each blink lasts about 0.3 or 0.4 of a second, which means we spend about 30 minutes a day with our eyes closed while blinking.

In an average lifetime, this adds up to about five years of blinking. That’s five years with our eyes closed, not including the much lengthier time that they are closed during sleeping.

After a conversation with fellow game designer John Billingsley, which was hinged around the question “What if games could incorporate blinking as an input?”, Will Hellwarth became strung up on a single, mesmerising idea: “A game where every time you blink, time goes forward, and the tension would be about not knowing which blink would be your last.”

It sparked a Dr. Frankenstein fantasy of hacking together aluminium tech bits to create an eyelash-attached peripheral worthy of A Clockwork Orange‘s grim Ludovico technique. The goal, no matter how horrific the method, was to somehow translate every blink a person committed into an in-game transition.

all memories can be involuntarily skipped

The idea remained ponderous until Hellwarth was prompted to take it further upon the arrival of an opportunity during an experimental games class at the . Pursuing this new project, he and his team tried out various 3D sensors and webcam facial recognition technology to see if blinking could become a reliable videogame controller. Microsoft’s Kinect worked, but the team wanted something that would be more readily available to a larger audience. After some research, Hellwarth settled on a piece of software created by Mixamo.

“I had basically er… modified a version of their FacePlus software to act as a blink-detecting input for a game running on top of it in Unity, but I needed their help to actually make the executable,” Hellwarth said. “They liked the idea and sent us a developer-focused version of FacePlus that allowed us to focus on making the actual game, which was great.”

When discussing or reading about blinking you become self-aware of the process itself, which is otherwise a semi-automatic function. You don’t need to think to yourself “right, I need to blink,” you just do. You blink to clean your corneas, where dust or grime may gather, essentially serving the same purpose as the windscreen wipers on a car.

A sudden awareness of your blinking process typically causes you to fight against it, straining your eyes as they begin to sting. This, usually, leads to you blinking more, rather than less, as might be your goal.

Close Your presents you with a series of vignettes, which are designed to be short enough to experience in the time you take between blinks. On average, each vignette lasts less than 15 seconds.

turn the semi-automatic process of blinking against us

The vignettes are each a moment from the player’s life, or rather from the character’s they’re playing as, spanning from being a child to their dying breaths. There are office parties, hospital visits, bullying scenes, and a first kiss. Speeding through these at a pace that you dictate but cannot control is a realization of the widespread idea of life flashing before our eyes just before we die. Hellwarth tells me that not all of the scenes are important, as is the case with our real memories, but there are special ones that would affect us in a significant manner—perhaps how we think and act—and there are also mundane memories mixed in among those.

But, and this is important, the player has no idea which are which, and any and all memories can be involuntarily skipped as they are cut short when the player blinks.

“During the whole process we kept in mind the original idea of “the last time you close your eyes” and so the choices you can make all tie into the moments surrounding your last scene,” Hellwarth said.

The narrative design and overarching tone of Close Your is taken from Arthur Miller’s 1949 stage play “Death of a Salesman.” It’s an anti-power fantasy, both structurally and in how it’s played, as Hellwarth and team turn the semi-automatic process of blinking against us in the game. The aim of Close Your is to help the player come to terms with being disempowered which, as playtests have proven, can result in a range of reactions, all of them highly emotional.

The team behind Close Your came together under a common passion for experimental games. Specifically, they’re interested in intersecting advances in hardware with making videogames more accessible to people outside of enthusiasts. Among them is an excitement about how rich the design space is even within the limitations of common consumer hardware, such as webcams and microphones.

Hellwarth reckons that people have been shy to make use of these technologies due to the tracking software lacking accuracy in the past, but he says that this is no longer a problem. “There is a conception, especially with the Kinect being available, that webcam tracking is primitive, when the truth is that even modern Samsung selfie-cams are capable of pupil tracking,” Hellwarth tells me.

Close Your was picked for the exhibition at IndieCade recently, and while there, it went on to pick up the Developer’s Choice Award. The official recognition is appreciated, but the team that built the game are clearly more touched and affected by the reaction that players on the show floor had during and immediately after playing the game.

You can see in the game’s “Reaction Trailer” that people were moved in a number of ways; some wiping tears away that had rolled down their cheeks, others wowed by the experience. Hellwarth had always hoped that Close Your‘s universal themes of life and death would move some people to tears, and he says that when that did happen, it was “the best reaction [they] could expect and [it was] weirdly gratifying.”

The biggest surprise came from the people that Hellwarth describes as “power gamers.” These players went in with a must-win mentality as you’re encouraged to and taught by other videogames. They would keep “their eyes open until they were absolutely sure they had got what they wanted, but the built in balance to this is the more you keep your eyes open the more you need to blink after,” Hellwarth said. This led to some frustration in some as they couldn’t battle against the wills of their own body in order to experience the complete game as they wished to.

What the Close Your team got most of all from their IndieCade experience was a boost to their spirits. Their fellow game creators, and especially We Are Mu?seli—who are working on the fantastic Hieronymous Bosch-themed visual novel CAVE! CAVE! DEUS VIDET.—engulfed them in positivity. So much so, in fact, that Billingsley (the aforementioned game designer) burst into tears, overwhelmed by the encouragement and kindness around him.

It’s safe to say that this young student team, and now IndieCade Award winners, will be experimenting in the accessible space between technology and videogames for a while longer. “One space we’re particularly interested in is the YouTube scene because of how frequently webcam videos accompany games commentary for reactions, and the juicy emotional data that is in the facial expression of a player,” Hellwarth said.

Unlike the desperately forward-reaching tech companies, this team is looking closely at the way that games are already being played and experienced, and designing around that, rather than trying to bend this around the requirements of a new technology or playable experience. For this, Hellwarth has even brought on Keenan “Criken” Moismann, who is entrenched in the livestreaming and video content side of videogame playing, and able to bring that knowledge to the pot for the others to bounce off.

They may be students with lots of school work ahead of them, but their ideas are moving at the pace that the tech and gaming worlds orbiting around them are. Now, with all this fresh energy and positivity pushing them forward, it seems that if you blink you’ll miss ’em.

Check out Close Your’s website for more information and images.