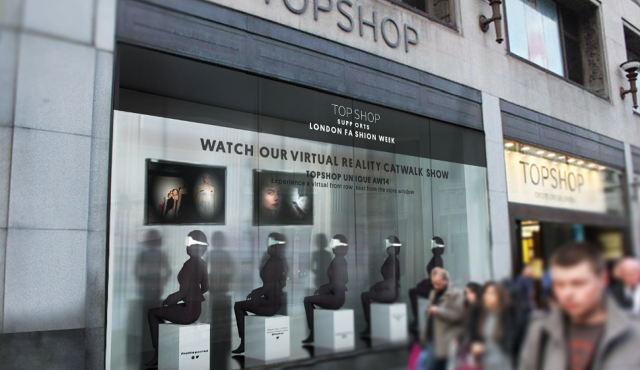 We knew that affordable, consumer-level virtual reality would take us to places we’ve never been. We didn’t know that it would be to the front row of a swanky fashion show in London. However, that’s exactly what clothing retailer Topshop plans to do for its Autumn/Winter 2014 line, which they’re showing on February 16 to 18.

By strapping into a virtual reality headset at the flagship store, you can virtually sit at the foot of fashion models as they parade down the runway, which sounds nothing like the dizzying Hawken demo I tried. The great irony here is that virtual reality headsets, which are about the most clunky, unfashionable device imaginable, will be used to take a gander at ultra-chic designer dresses.

Whether are not you’re into fashion, there are huge future implications at play here. While we tend to think of virtual reality as putting us in the action, it could change the way we watch live events like sports, too. It would be amazing if you could watch a boxing match ringside from your living room; or be in the stands at the Olympics from around the globe. Unless you’re watching the luge. That’d have to be first-person, of course.