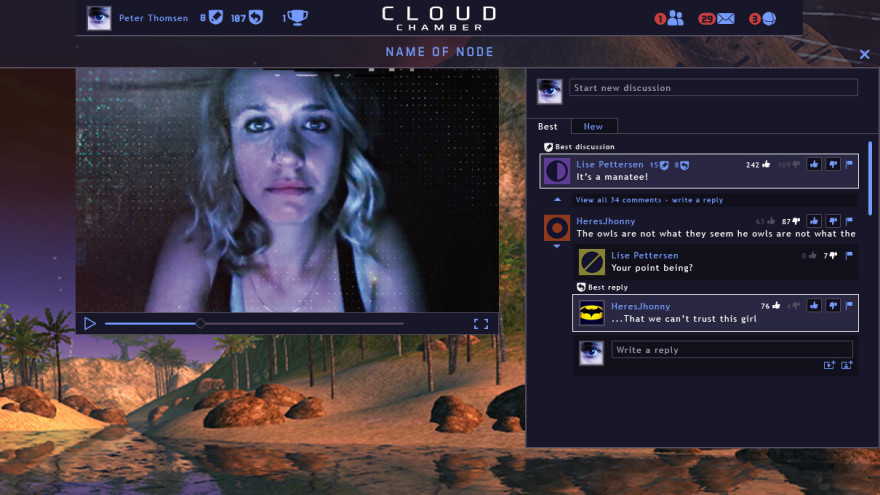 Found footage style storytelling like Blair Witch Project compels horror movie audiences for obvious reasons. Unlike regular film experiences, found footage supposedly has no author. With no one telling the story, the audience almost begins to feel as though they themselves are the ones responsible for authoring and solving the ghoulish mystery. This is part of the reason why most found footage horror films leave lore and details pretty vague, inviting us to think up our own. So we scour the footage like detectives, eyes pealed for any anomalies or missed hints, brains buzzing with potential answers.

Cloud Chamber takes this basic concept to new heights, in a massively-multiplayer story game that’s all about solving murder and mystery through Internet discussion. It’s difficult to give a synopsis that fully captures its many sides. As a transmedia experiment, Cloud Chamber combines found footage clips, social media, and gaming elements to create a space for players to investigate a not-so-impossible science fiction story.

You play as a young scientist, Kathleen, whose mother made a breakthrough in astrophysics decades ago by discovering a signal from space. That signal was said to be able to change how we think about the birth of our universe, but Kathleen’s mother was mysteriously murdered and her discovery covered up shortly thereafter. Now it’s your task to take up her mantle by solving the mystery of her murder, and perhaps even making some revolutionary discoveries of your own about subatomic particles in space along the way.

In Cloud Chamber, you play by investigating secret documents, astrophotography, space documentaries, and professionally shot video clips. But to truly master this game, you must also conquer a reddit-style forum of fellow investigators who are also piecing together information and theorizing in order to uncover even more hidden information. The more upvotes, comment karma, and interactions you contribute to the forum, the more you unlock from the 3D database within the game called “Crowdscape.”

Although Cloud Chamber combines elements from many mediums, Internet discussion remains at the heart of its experience. Fans of shows like Lost will remember the online frenzy of fans dedicated to figuring out every aspect of its multi-layered mysteries. Cloud Chamber takes that impulse and trusts its fans with the ultimate fate of its story. Christian Fonnesbech, CEO of Investigate North and creative director of Cloud Chamber, hopes the transmedia experiment will be a revolution in the art of using networked computer as a medium in itself for storytelling. Investigate North plans on releasing more content in an episodic-like structure, continuing with the complex and forever unfolding enigma of astrophysics. Let’s just hope the real-life science bits will satisfy Neil de Grasse Tyson.

You can join Cloud Chamber‘s investigation this thursday on your PC through Steam.