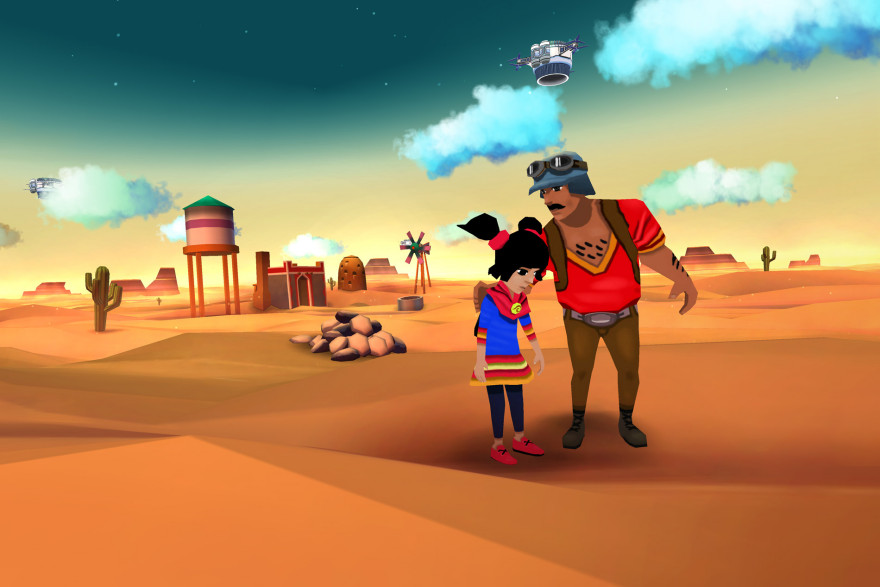 Cloud Chasers—A Journey of Hope is a pretty game about migration, which is to say that it’s a visually appealing game about the great many ways in which this world is wretched.

In a post-apocalyptic world—aren’t all words basically post-apocalyptic at this point?—a farmer and his daughter cannot go on living in the desert. They therefore go on the sort of journey many individuals in similar positions have undertaken. The game’s player must guide the twosome on their journey and conserve the scant resources available to them. Sure, the pair is traversing a procedurally generated desert to reach a city in the sky where the privileged elite lives, but their basic trajectory is broadly applicable.

There is, on the one hand, no denying that many migrants and refugees face grim choices in their search for a better situation. The BBC’s Syrian Journey newsgame, while more deeply and apparently rooted in fact than Cloud Chasers, covered similar choices. The realities of migration are important and games developers have attempted to represent them in their work. Of course it also helps that, as a consequence of various policies and calamities, migration is a phenomenon that can be mapped onto basic videogames with considerable ease. Games like Cloud Chasers have forward motion, choices, and an end goal; you are going somewhere and must do things to reach that point.

some forms of migration can easily be mapped onto game mechanics

For every person who sets off on a grand journey, however, many more do not. As a percentage of its population, Lebanon has accepted far more Syrian refugees than any European nation. The journey to Lebanon and the experience of staying there is meaningful, but it doesn’t translate as well to game mechanics. Refugees have been living in camps around the world for decades, but that sort of stillness isn’t obviously game-y. Their experiences are no less significant for it, but they are perhaps a bit less well known.

None of this is really Cloud Chasers—A Journey of Hope’s fault or something to be held against the game. Yet when a site like Android Authority calls Cloud Chasers a “moving game,” one cannot help but wish that it wasn’t so obvious that the word moving didn’t have a duel meaning in this context. Stillness, egad!

Cloud Chasers—A Journey of Hope is available for download on iOS and Android.