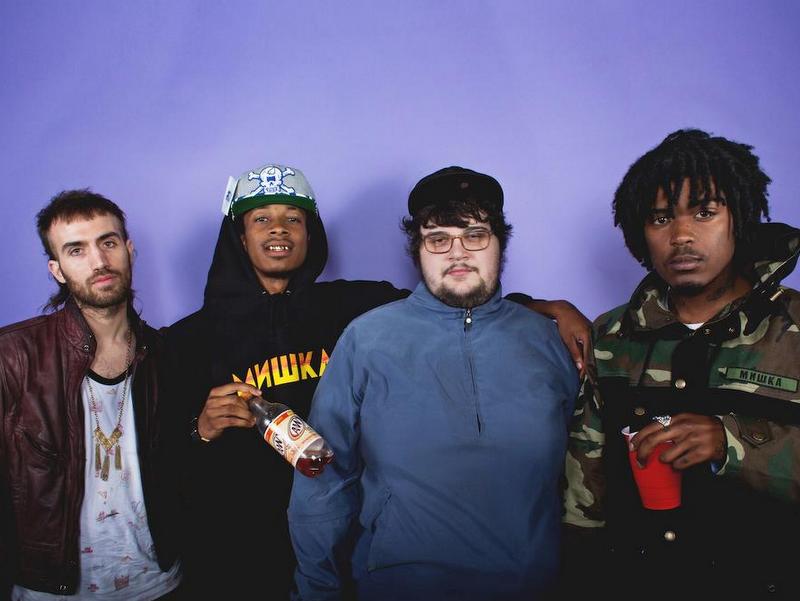 “We work hard, we love each other, we smoke a bunch of weed, and we love RPGs,” says producer L.W.H. of his work with the rap collective Green Ova Underground.

He only seems to be half-joking.

The California-based crew is impossible to keep up with, creating new albums and sub-sects seemingly anytime a member shows up at another member’s house, and sampling liberally from games like Chrono Trigger, Chrono Cross and Xenoblade Chronicles. Together, the musicians are at the vanguard of a burgeoning strain of hip-hop that critics have dubbed “cloud rap,” both for the miasmic quality of the music and the mountains of marijuana consumed, presumably, during its creation.

The banner encompasses a lot of music—from the grandiose Dirty South thump of G-Side to the low-brow, lo-fi blog-baiting of Lil B—but all sound unmistakably in tune with each other, at once warped and wide-eyed. The emceeing is noteworthy for its sincerity, often wondering quietly at the universe, and the production marries classic boom-bap drums to mournful ambient samples.

Last month, cloud rap broke big, when ASAP Rocky’s Long. Live. ASAP debuted at #1. But Green Ova has distinguished itself over the past two years (an eternity in rap) with over two dozen albums, each laced with bleary, sing-song emceeing and increasingly forward-thinking production. Their convergence with videogames—and the origins of the “cloud rap” name—can be traced to a single track: that is, “Cloud Skatin,” on which a trio of emcees dropped ebullient rhymes over a discretely tweaked Xenogears sample. That track’s producer, Julian Wass, has since become one of Green Ova’s go-to producers, and for him, the fusion between hip-hop and videogames occurs at an almost unconscious level.

Julian is running a contest to give away a 12″ x 12″ print of the cover art to whomever can name the most samples. Email him at mitsudacontest@gmail.com to compete.

“It’s a convergence of nostalgia for me,” he says. “I remember being at my friend’s house and playing Final Fantasy 2 and listening to The Chronic. (I got) to a certain age where I could appreciate art, and the two arts I was appreciating at the time were West coast hip-hop and RPGs.”

And what are haters, hangers-on and sucker emcees but slimes, Shinra forces, and giant rats.

The melodrama and surrealism of JRPGs served as a catalyst, transforming those luminous West Coast synth lines into haunting, beautiful soundscapes that are indebted as much to Brian Eno as they are to Dr. Dre. The 8-bit influence pervades Wass’s work. In 2011, he released a synth-heavy EP called “Crystals”—which L.W.H. calls “a JRPG saga unto itself”—and he’s currently putting the finishing touches on a compilation of hip-hop that samples legendary Squaresoft composer Yasunori Mitsuda. (The cover is a portrait of Mitsuda by Spelunky’s Derek Yu.)

The mixtape manages to yoke the artforms together with a sense of finality. Compressed into a single sonic experience, similarities bloom. Fight sequences take on the feel of a rap battle, combatants waiting their turn like emcees around a mic. Those long hours of grinding toward a new level recall those long hours spent sifting through mixtapes for one hot track. Both take in the epic sweep of a hero’s journey, bringing us from nothing—whether amnesia or a ghetto—to stand astride the world. And what are haters, hangers-on and sucker emcees but slimes, Shinra forces, and giant rats: imaginary cannon fodder felled on a god-given mission?

JRPGs and hip-hop have always drawn from the same cultural well, in other words; the Mitsuda mixtape just makes it explicit.  “It’s still some of the most emotive music that’s ever been made,” he says of Mitsuda’s compositions. “I think about the Xenogears soundtrack. There’s not many pieces of music that could bring me to tears, but half of the tunes on there could.”

“I went to Japan when I was 13 and it completely changed the way I look at things.”

One of the highlights of the Mitsuda compilation comes from James Laurence and Dylan Reznick, who operate together under the name Friendzone. Their airy, romantic “Fashion Killa” also provides one of Long. Live. ASAP’s brightest moments, and it’s a fine example of their sound: immaculate, melancholy, and huge, like a Squaresoft RPG. Across their mixtapes and forthcoming full-length DX—the title itself a nod to Konami’s DJing sim Beatmania IIDX—synthesizer lines rise like spires on a crystal cathedral, warm melodies feel like MIDI loops at a seaside village, and samples of Japanese dialogue create moments of searing humanity.

Friendzone’s Japanophilia extends to their visual aesthetic, which fixates on bright anime figures and on the 1986 suicide of teen idol Yukiko Okada. “I went to Japan when I was 13 and it completely changed the way I look at things,” Laurence says. “I loved the lights and the colors on the streets and being surrounded by more people than I have ever seen. It inspired me and it definitely seeps its way into the art I do for Friendzone.”

This connection runs deep. Both otaku and b-boys are fringe cultures that have telescoped into the mainstream; both seethe with repressed rage funneled into a sort of permanent boyhood. The connection between the comic book store and the record store was explored by the RZA, whose Wu-Tang Clan donned the guise of ninjas to become ghetto superheros, and MF Doom, whose early albums play as a tribute to Japan’s figurehead of post-atomic impotence, Godzilla.

Both otaku and b-boys are fringe cultures that have telescoped into the mainstream.

In broader commercial culture, the iconography of hip-hop and Japanese pop culture have enjoyed direct interplay. In the hip Harajuku district in Tokyo, teens form queues for the chance to peruse the latest streetwear, and ganguro girls tint their skin and wear fake dreadlocks in an outsized imitation of Lil’ Kim. Japanese culture found its way back to North American rappers via honest-to-God beef over who wore Harajuku-based Bathing Ape sneakers first, and via a haute couture enchantment with Takashi Murakami, the manga aesthete who went on to design the cover of Kanye West’s Graduation.

The music of L.W.H., Wass and Friendzone reaches even deeper into the Brooklyn-Harajuku connection to create hip-hop that encompasses fashion and popular art as well as a deeper, distinctly Japanese sort of spirituality. Reznick says that the best Japanese art “all shares this special kind of atmosphere that really resonates with me. It’s a kind of spiritual, otherworldly feeling. (….) We don’t even really have words to describe it in English but it’s a part of everyday life over there.” It’s this tone of melancholy and mystery that renders cloud-rap distinct from other hip-hop.

And while Friendzone’s trilling, hi-hat-heavy bangers can evoke everything from Lex Luger to 90s trance, the actual chiptune soundtracks of classic Japanese videogames may be their dominant musical ingredient. “What really influenced me as a kid was Sonic 3,” Laurence says. “That shit made me rock out as a fucking 8-year-old!” Those chiptunes were, reportedly, the result of a failed collaboration between Sega and Michael Jackson. In their sprightly fusion of videogame aesthetics and pop-R&B production they draw a lo-fi, inchoate trans-Pacific line.

“People in general can only hear the chip. They’re like, ‘Oh, that’s so cute.’”

The real point of interest, though, is when that influence is funneled through Pro Tools and rendered almost blisteringly hi-fi. This transmutation has been attempted before, although with little success. Self-proclaimed “nerdcore” emcees like Frontalot, Optimus Rhyme and Paul Barman emphasized nasal flows and nerdy in-jokes, winking at their own wackness in a way that ultimately seemed to mock hip-hop itself. It treated rap as a punchline, and “nerds” as hermits who needed their own cultural touchstones spit back at them.

Similarly, pure chiptunes revivalists, no matter how sophisticated their compositions, have been consistently accused of novelty.  Wass, who has dabbled in chiptunes, says, “I love chiptunes but I feel like the inherent problem with chiptunes is that it brings up the novelty aspect of videogame music … People in general can only hear the chip. They’re like, ‘Oh, that’s so cute.’”

These producers, then—along with Keyboard Kid, SpaceGhostPurrp, and others—have pushed through that narrow novelty and discovered a full, teeming landscape on the other side. They’re on the world map now, in other words. It’s as vivid as any hip-hop currently being made; when Green Ova’s cabal of emcees lace these tracks they do so with the same heart and fury they would on a Pete Rock beat.

And while the producers all point to nostalgia as an inspiration, that’s not what we hear in their music. What we hear in Green Ova is that capacity for reinvention and recontextualization that is the lifeblood of hip-hop. What we hear is the same thing we feel before selecting “Start Game” for the first time: boundless possibility. These producers grew up delirious on the exuberance of Japanese videogames, but today, like L.W.H. says, “It’s embedded in us.” They couldn’t make their art without it.

“I feel like probably you could make a great hip hop beat out of anything that you love,” Wass says.