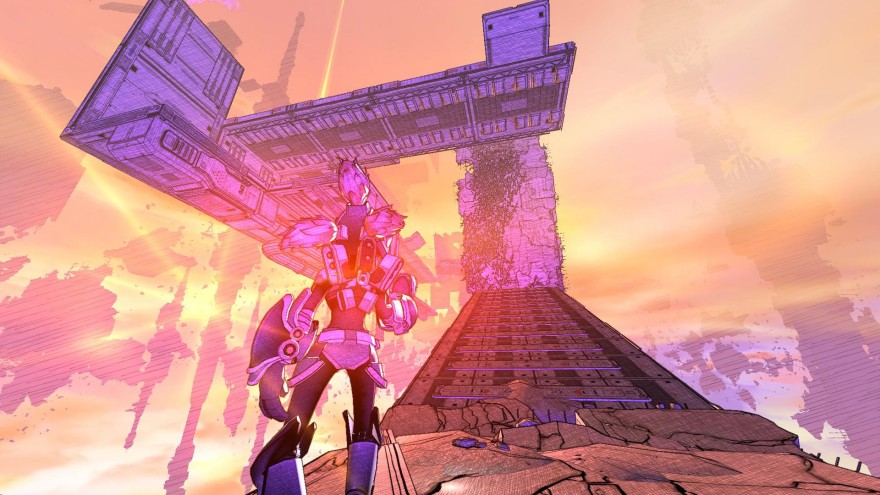 Like the next person who grew up in a world where hedgehogs could be blue, bipedal, and clip along at a superhuman pace, I can appreciate speed. Cloudbuilt’s full of the stuff; not only in game design, but in purpose. At the end of each level a timer counts up to see just how long you took to get to the exit, adds in extra for all of the times you died, and ranks you on a letter grade. The game doesn’t care how you got to the exit; just how fast you did it. Style doesn’t count if you’re not hitting the leaderboards, a list of bunched up names that pops up every time I contemplate starting a new level.

Hard to describe, Cloudbuilt is more Dustforce and Super Meat Boy than Sonic, but the resemblance is there. And if those two are the parkour- and difficulty-infused descendants of classic Sonic, Cloudbuilt is the logical conclusion of Sonic Adventure, the Dreamcast Granddaddy that steered the franchise’s lineage towards three-dimensional  free-roaming. It takes that sort of groundbreaking freedom and stretches it in all directions, a move which unfortunately lacks the simplicity present in a 2-D sidescroller. The goal, however, remains: finish this level as fast as possible.

To do that, I must learn to run, and then eventually, a lot more. The controls are tight once I manage to internalize them, but the tutorial’s a little reluctant to dish out tips, hoping that the most basic of instructions is enough. And they are, sort of; but often I stumble where I should have flown. Where I was supposed to perform a multi-wall run—bouncing back and forth across two perpendicular surfaces—I kind of fudged it with a long jump. I still got to the exit; it just wasn’t pretty.

This is the thesis of Cloudbuilt. In theory, the way from point A to point B is paved in wall jumps, wall runs, wall climbs, and a cacophony of boosts from my jet pack. When it all comes together, I feel like a tiny god, latching onto walls, zipping past laser traps, and deftly avoiding barrages of enemy fire. In practice, it’s filled with potholes; a missed jump here, a frantic boosting there, and once again I’m clutching to a ledge for dear life before hopping up and waiting for my energy meter to refill. Or I’m falling into chaos, hoping to hit a ledge below me so I don’t have to start all over. Or worse, I’ve missed everything, and I’m falling, down, down, into an infinite abyss.

In a game about such speed, the time from failure to reset is painfully pregnant. It’s a familiar feeling: the same existential emptiness that follows a wrong turn off of Mario Kart’s Rainbow Road. At the best of times, these sequences are a brief reprise to focus on my failure: a lack of agility that results in a mistimed button press. I appreciate them in their Zen-like nature, a space to catch my breath while my protagonist is about to lose hers.

The game’s individual stages are actually façade, wrapped up in a narrative.

At the worst of times, they’re chance to reflect on what feels like a grievous inclusion. When I was learning to run, jump, and cavort with the innocence of a freshly born space-calf in the tutorial, I was also learning to shoot. The center of Cloudbuilt’s screen is a crosshair, one I’m supposed to point at a plethora of mines and robots, each with the intent to halt my progress, usually by killing me and sending me spiraling into several seconds of regret. I can get behind the well-thrown blue shell that knocks me out of first place, because at the same time, it is a tool of somebody in dire need of help, an equalizer. Some of Cloudbuilt’s enemies offer that same impending doom, but there’s nobody on the other side pulling the trigger: just some enemy AI force laughing it up and winging fastballs at my carnival dunk tank.

While Cloudbuilt is around speed and unfortunately guns, it’s also about war, or the aftermath of war. The game’s individual stages are actually façade, wrapped up in a narrative: the protagonist—as she is outfitted with equipment and able to perform death-defying stunts—is actually the mental projection of a bed-ridden patient. The stages are her comatose hallucinations of freedom: though she may be confined to a small, sterile room, in her thoughts, she is fully able to reach towards the sky and rocket along the stars.

It’s an oddly human accoutrement to a game that is about so much inhuman speed. But at the same time, the game’s about inhumanity—the inhumanity of war, trauma, and the long arduous process of rehabilitation. Branching levels reveal branching narratives, and depending on which road I’m traveling, the cloud-bound sky-wrecks are either childhood leftovers, new creations of a damaged mind, or induced dreams to prepare for a long, difficult journey to recovery.

Either way, it’s a deeply touching rumination on difficult topics—war, trauma, rehab—rendered trivial by the adherence of the game to weaponry, enemies, and leaderboards. It’s hard to take them seriously when so much of the experience is steeped in the idea of “pure gameplay,” just a player gunning it for the best time. Doubly so when these dreams—an escape from the reality of war and an example of unprecedented freedom and movement—are hindered by warlike robots that not only impede the movement of the player, but the success of the game.

They’re all relics of a war that ultimately doesn’t belong here.

So much of Cloudbuilt’s beauty is contained within action: run, jump, slide, turn. So much of the game’s frustration is caught up in static nouns: robots, guns, lasers, mines. In a game about speed, they’re all relics of a war that ultimately doesn’t belong here, and one I can’t escape. Their ranges often feel infinite, blindsiding me from across the map when the angle is right and making me long for the impenetrability of a sidescroller’s walls.

I’m on the last leg of a difficult level, and I am confronted by a series of multi-wall runs, which, up until recently, used to be my kryptonite. I’ve internalized the game’s fluid systems, and I’m making a plan on how it’s going to go—until I notice a tiny robotic drone flying directly towards me, coated with an impenetrable shield that makes it invincible until it hits. I swarm in circles, try to formulate a plan, catch my breath, and avoid the drone at the same time, but it’s a futile exercise—I know the drone is going to chase me the entire time, hit me from behind while I’m trying to concentrate on not only the fun of this level, but the fun of the game.

When I fall, I flail wildly, smashing buttons in an attempt to boost or double jump back to a safe platform. The protagonist cries out in frustration before giving up, and I can’t help but empathize.