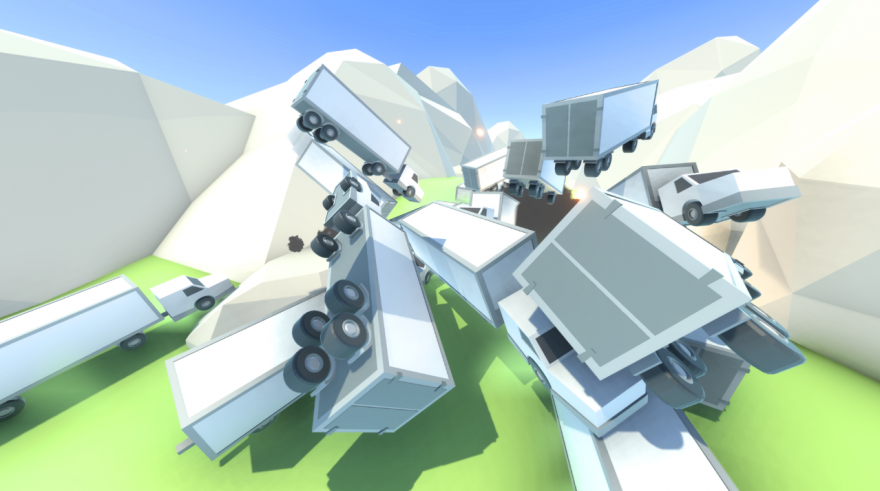 Even the best poker players are playing a game of chance. That’s exactly how it feels to play Landfall Games’ upcoming Clustertruck. No matter how good I thought I was getting at it, no matter how well I had done in the prior level, something unexpected would come along and put me in my place.

Part Hotline Miami (2012), part The Floor is Lava, Clustertruck’s objective is deceptively simple: jump from moving semi truck to semi truck until you reach the goal. Fall on the ground, though, and you have to start over. Easy, right? No. The second you take your first step you realize how blisteringly fast and loose the game controls; simply jumping from one truck to the next becomes a feat of precision and agility. But that’s not the hardest part.

As you barrel down each level, riding each truck with your heart in your throat, landscapes that reshape themselves and wonky physics throw proverbial wrenches in all your plans. The level may start calm, where the hundreds of trucks travel in unison, making jumping from one to the next relatively simple, until the level bottlenecks, moves under your feet, or introduces obstacles along the way. Next thing you know, you’re jumping over colliding trucks, narrowly avoiding cataclysmic pile-ups, and making it to the finish line by sheer dumb luck—never skill. It is, as you may have deduced from its name, a clusterfuck.


Getting from the beginning to the end of a level rarely takes one minute (not that you’ll be able to finish one on your first try), and Clustertruck’s use of the Tetris Effect constantly kept me engaged. Sure, I beat a level. But what was next? I just spent 15,000 points on a double jump, how will that affect my game? It’s constantly challenging you to do better, to do more, all the while never relenting, always getting harder and crazier.

Clustertruck’s random nature isn’t without its problems, though. Sometimes colliding trucks will make impossible obstacles to get around, leading to an inevitable failure. It’s unfair, sure, but its good largely outweighs its bad. I’m stuck right now. I can’t for the life of me get past this level, but I can’t wait to go back, to try again. It’s a goofy, annoying, and kinda great.

Clustertruck will be released September 27 via Steam.