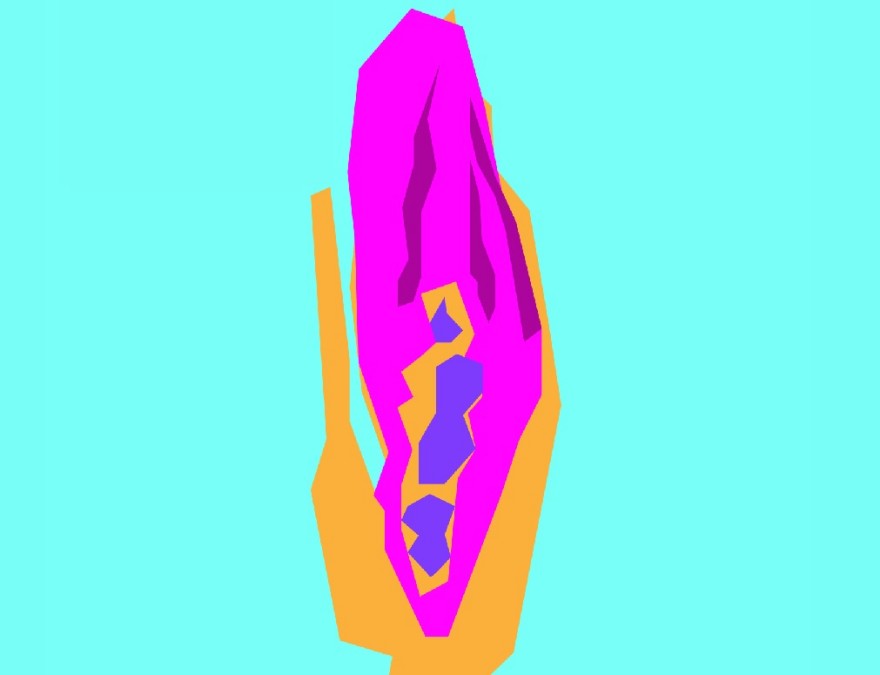 You know you’re in for a treat as a journalist when an interviewee refers to the people in an email discussion group as fellow “Cuntemplators.” Such was the case with the small team from Copenhagen Game Collective who created the meditative vagina drawing game Cunt Touch This.

“Whenever there is a game that allows you to draw, the first thing that goes online is penis drawings,” says one creator, Ida Toft. “Where is the mainstream pop-cultural equivalent for us—the casual vagina humor, I wonder?”

Cunt Touch This (CTT) is an interactive touchscreen translation of Tee A. Corinne’s 1975 Cunt Coloring Book. As an intimate and interactive exploration of her artwork, the game invites players to color a wide variety of vulvas using their fingers as paintbrushes.

Pacing is everything in CTT, since slow strokes correspond to thicker lines while more hurried motions result in a spray-paint style streak.  But the vulva acts as more than just a canvas: she’s your partner, responding to your painterly titillations whenever a particularly sensitive area is touched.

“Thank you, it was my pleasure.”

Focused stimulation sends your Cuntsort into an operatic exhibition of her gratitude, as the vulva-drawing pulsates in time with the vocal crescendo. Eventually, your strokes bring forth a white screen of bliss, followed by an immediate dismissal in the form of a courteous: “Thank you, it was my pleasure.”

But the point of CTT isn’t really all about orgasms, or necessarily even sex. “In real life, chasing female orgasms has become a kind of folk sport,” Ida says. So, technically there are no win-states in the game, because as Sabine asserts “you never win ‘over’ the Cunt. You win for it.”

While Corinne’s 1975 coloring book hoped to demystify the mere existence of female sexuality and sexual organs, CTT aims to tackle the challenges modern vaginas face today. Like, as game designer Andrea Hasselager points out, the fact that even in the porn-accessible Internet age, “we’re still usually only shown one very stylized, homogenous-looking vulva. But Corinne’s drawings make you go, ‘Hey, they’re all different, and that’s ok and actually quite wonderful.’”

CTT is doing so much more than just putting beautiful, diverse female body parts on display, though. “We’re daring you to enjoy them, celebrate them through the popular media we enjoy,” says Ida. Still far off from eradicating Corinne’s original intent to demystify the vagina, Sabine laments that “female pleasure organs remain to this day [a] subject [of] taboo, shame, and a strange kind of disgust.”

Just last year, comedian Amy Schumer had to fight for the right to say the word “pussy” on her TV show. Meanwhile, the guys on Workaholics are literally chanting the word “dick” on the same exact channel, around the same airtime. I mean, for Christ’s sake, they made a surgical doctor say the word “va-jay-jay” on Grey’s Anatomy because execs felt they needed to cut back on use of the word “vagina.” They were unwilling to say the word vagina, the sexual reproductive organ responsible for pushing out all of human life ever, on a goddamn medical show.

Humor is a huge part of normalizing taboos, Sabine asserts, because “humor fosters imagination, creativity, and a sense of belonging. It’s a sign that we’re engaging the topic, even if we’re uncomfortable or uncertain of how to address it. It’s kind of a first step towards owning something.”

“It’s about reclaiming and owning our own body parts.”

Women have been fighting to take back the word Cunt ever since Tee A. Corinne named her vagina coloring book back in the 70’s. But, even after all these years, it remains one of the most derogatory insults you could possibly sling at a woman.

Although some feminists debate the validity of reclaiming Cunt, Ida maintains that “it’s a great word, and we wanna own it.” To some, cunt might be a word unworthy of reclaiming. But to others—perhaps those who’ve been on the receiving end of an insult they felt powerless to undermine one too many times—it’s a word that desperately needs recontextualizing.

“It’s about reclaiming and owning our own body parts,” says Ida, “and all the rhetoric, taboos, and pleasures that come with it. “ The name of Cunt Touch This might certainly put some off—especially women against all use of the terminology. In fact the single male contributor to CTT, artist Raimund Schumacher, couldn’t even show the game to his sensitive female friends, since the content seemed too abrasive coming from a male source. “But this is our game,” Ida declares. “We didn’t make it to satisfy someone else. We made it for ourselves. And that in itself feels very empowering.”

And, make no mistake, CTT isn’t for everyone. A common reaction to the game that the team neither designed for nor anticipated was the sheer amount of embarrassment people felt. Sabine suspects the embarrassment mostly happens to players “who haven’t internalized the idea of the vulva as something to be ‘played around with.’” Ida thinks that “when a game about our most central organ for pleasure and passion is subject to such embarrassment, it shows us that there’s still a lot of work left to be done.”

Sabine believes that enjoying or rejecting the game experience could even be a telling research tool, demonstrating how we conceptualize different types of pleasure and how they relate to liberation and oppression. She even suspects that observing the social dynamics that unfold in a group of men left to their own devices with Cunt Touch This “can be a reliable casting tool for prospective lovers.”

“Games and play help us test our own boundaries.”

First and foremost, though, before orgasms, vagina humor, and even sexuality, Cunt Touch This is about transformative exploration. “Games and play help us test our own boundaries,” Andrea says. The fixed rules act like a safety net, providing a safe space to partake in taboos that are crying out to be addressed, or at least a little titillated by the mainstream.

If you want to get more of the male perspective or experience on Cunt Touch This, be sure to check out this research paper on the inadvertent role of embarrassment in the game. You can seduce your own vulva using your browser, or download it directly onto your tablet for the more optimized version.