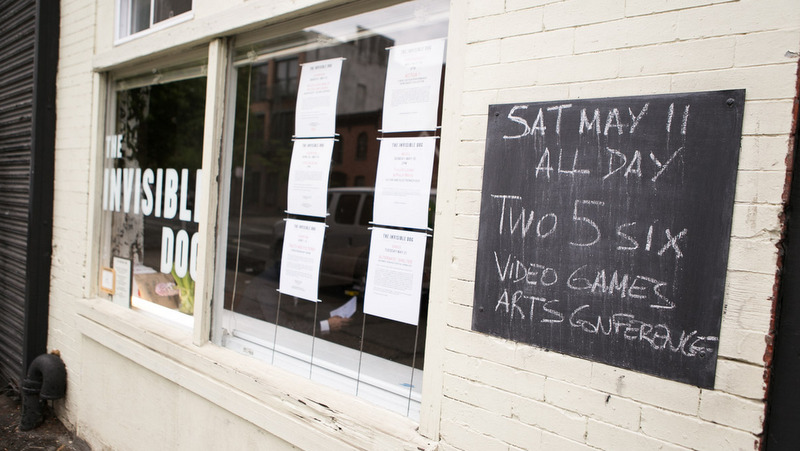 When you think about it, (and I mean really think about it), the invisible dog leash accomplishes the same thing as a videogame. Each takes something that doesn’t exist—a canine companion, a world or system to explore—and gives it shape, allowing the owner to experience the impossible.

So it makes a kind of sense that Twofivesix, Kill Screen’s first conference, would take place at the Invisible Dog Art Center in Brooklyn, NY, a space now devoted to art but once used to construct makeshift fantasies. Two hundred attendees joined a dozen and a half speakers to discuss a medium so often coerced into the fantastical. The aim was simple: to figure out how and why we devote our time, energy, funds and passion into the simple and meaningful act of play.

A chalkboard sign announcing the event to passersby presaged the event’s stripped-down mentality. Aside from a few video clips and slideshow images, the format hewed closely to a pre-information age approach, with much of the content disseminated the old-fashioned way: through conversation. Two experts from different though not-wholly-unrelated fields came together on stage to find common ground and consider the games of tomorrow. Jamin Warren, co-founder and editor of Kill Screen, played matchmaker, asking questions and keeping the discussion flowing ahead.

On the same day we unveiled our seventh print issue, spotlighting ‘The Great Outdoors,’ we spent most of the day in from the stormy northeast weather. As the rain fell, game designers, composers, writers, artists, marketers, and educators gathered in folding chairs on a third-floor held up by wood beams and listened. Each pairing of speakers tangled over a specific theme. For instance, Jeffrey Yohalem, writer of Far Cry 3 and Assasin’s Creed: Brotherhood, spoke with Andy Hunter of digital publishing platform Electric Literature about the future of storytelling. The range of topics stretched wide, from education to interface, design to digital sports. And as they are wont to do, questions formed a suitable foundation for discovery.

How does play enhance learning? Zach Klein, CEO of DIY, spoke of his own experience as a Boy Scout and how it drove him to form a platform for experiential learning. An image of children digging in the dirt for worms foregrounded his emphasis on The Beginner’s Mind, and how “that sensation shouldn’t end with adolescence.”

Constance Steinkuehler, assistant professor at University of Wisconsin, Madison, agreed that the experience of play often mirrors how we learn. She encouraged educators to allow students the freedom to choose which texts to read, citing the incredible power of agency and choice, that same elixir offered by so many games, electronic or otherwise.

How do we improve online behavior? Jeffrey Lin is lead designer of social systems at Riot Games, makers of League of Legends, and his moniker isn’t a euphemism. He and his team construct and encourage very specific types of social activity in a setting often seen as random, unpredictable and too often unsavory. They use long-held experiments from psychology to help understand their players’ motivations—sometimes the fix for an abusive community member is as easy as telling them they were wrong.

A day filled with thoughts on the future now already stuck behind us in the past.

When Chris Poole began 4chan, it was built for a small faction of like-minded otakus; now, the sprawling forum gets over twenty-six million visitors a month and has spawned a great many memes (not to mention the protesting hive mind of Anonymous). He likened internet-based societies to the struggle of sailing, where the community is the wind. Turn the wheel, bring in the sail, adjust the rudder: little is in your control. You’re up against a force of nature, and there’s only so much you can do.

Oh but there’s too much! If only you could all have been there. The first floor of the art center featured an exhibit called “The Exploded Mind of Muholland Hwang.” You’re supposed to be inside a bedroom of a child, witness to his inner-most imaginings made real. Tiny dioramas of rural houses mingle with large paintings of animals in poetic duress: a cow inside of a whale, a horse facing off with a zebra, et cetera. Convergence is all about the fortuitous exchange of surprising insights, the rubbing up of unlikely bedfellows. In the spirit of exploded interiors, here’s a cross-section of words and images thrown together on Saturday, a day filled with thoughts on the future now already stuck behind us in the past.

Build the hot-tub before the house (Zach Klein) / The secret of a MoMA curator: “If it did not exist, would it be a pity?” (Paola Antonelli) / Oculus Rift creator Palmer Luckey jumping in place while rotating in a circle, his hands pointed gun-like to the sky / “Interactive play space is expanding, not contracting” (Dave Merrill) / With regard to the spectacle of mystery, “I’m on the side of mystery” (Rod Humble 1 of 2) / Game creation is like: growing a garden, preparing a favorite meal, a dance (Robin Hunicke) / “A deck of cards is always going to be more powerful than poker” (Rod Humble 2 of 2) / a drawing of a hand reaching out above quicksand, an arrow pointed ominously down.

“A deck of cards is always going to be more powerful than poker.”

Other stories bubbled up off-stage between the cracks of all those converging strangers. A composer for hit isometric action-RPGs and a recent NYC graduate argued the relative merits of David Bowie’s late era oeuvre (1993-present). Seat-neighbors playing Candy Box compared, assessed and flaunted the size of their burgeoning lollipop fields. One woman, unnamed, played Words with Friends for a majority of the eight-hour program, inciting the internal rage of this attendee and offering an indictment of and showcase for the sheer power of a well-designed game.

Even the restrooms had something to say. The walls were thick with scrawled messages from long-ago artists. “I don’t think about art when I work,” said the red chalk handwriting of a staffer channeling American neo-expressionist Jean-Michel Basquiat. “I try to think about life.” This felt like the conference’s one true goal, the lofty aspiration beyond networking and BBQ: to talk about play, but to think about life.

Ashley Alicea showed up early and stayed late. She grew up in Puerto Rico with parents who did not allow her to play videogames. The first and only game she could get her hands on was Full Throttle, a point-and-click adventure game from LucasArts about futuristic motorcycle gangs where you proceed through careful observation. She was enthralled. After arriving at Ithaca College with the intent to become a veterinarian, she submitted to the deluge of games played by friends and roommates. She pushed to create her own major, one centered on game design. In 2011, her team’s Embryonic, a strategy/educational game that takes place within a womb under siege by bacteria, placed top five in the world for Microsoft’s Imagine Cup contest.

As the last visitors to Twofivesix played BarabariBall in the Invisible Dog Art Center’s rear gallery, Alicea waited to speak with Tim Schafer, the night’s keynote speaker and head of Double Fine. He designed the game that lit a spark in a young girl’s mind that would fully blaze decades later. I don’t know what was said. It doesn’t really matter. The paths we follow are long and circuitous. How many began, or changed, on Saturday?