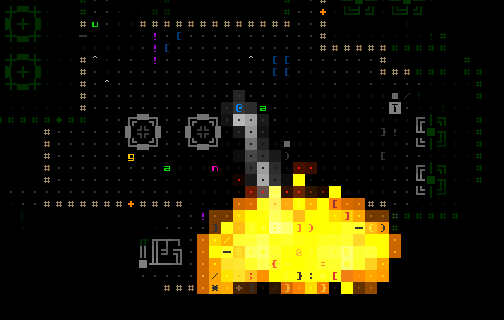 ASCII and the roguelike genre are practically inseparable. ASCII was there at the birth of the genre, bringing Rogue (1980) itself to life—and it’s stayed, with today’s most ambitious roguelikes such as Dwarf Fortress (2006), Ultima Ratio Regum (2012), and Cataclysm: Dark Days Ahead (2013) crafting sprawling worlds and adventures from ASCII’s collection of characters.

It’s understandable why ASCII persists even as the roguelike expands into myriad subgenres and aesthetics. The simple abstractions of your @ hero, potions, enemies, items, and so on, as letters and symbols allows for vast potential without having to visually display such complexities. Instead, flavor text, underlying gameplay systems, and the player’s imagination do the hard work.

A dynamic world of robots and encrypted files

Cogmind is another roguelike to add to that growing list. Eschewing the more common fantasy and apocalyptic themes, Cogmind transplants the genre to a dynamic world of robots and encrypted files. Creator Josh Ge has created a mechanical ecosystem of builders, programmers, recyclers, and other machines which interact and act independently of your actions—alerting patrols, rebuilding the world after battles, and cleaning away the debris. In the midst of these sci-fi maps is you, a rogue drone able to disrupt and manipulate this fluid balance through hacking, stealth, or the old mainstays of big guns and bigger explosions.


If the aggressively offensive approach is your style, Cogmind lets you relish in overwhelming destruction. The array of parts at your disposal is vast: treads, legs, wheels, various armor types, an arsenal ranging rocket launchers, railguns, and lasers to flame throwers, Gauss rifles, and EMP cannons. Destroying enemies lets you scavenge their scattered parts to use as your own; a more carefully crafted build can grant you the means to hack into defense systems, sneak past patrols while cloaked, or even construct your own army of allies to command.

These interlocked systems of the robotic ecosystem, the variety of parts, and your build lets you approach Cogmind‘s procedurally generated challenges in countless ways. The simple threat of an enemy-spawning garrison can have its signal jammed, be hacked to send its response squad to another location, or even reprogrammed so its inhabitants protect you.

Cogmind recently received its biggest alpha update since public release, adding an expansive amount of late-game regions and lore, as well as many more enemies, weapons, and parts for those areas, among other new mechanics. You can purchase the game directly from developer’s site for $24.99, and find more details on its development through its website and TIGSource devlog.