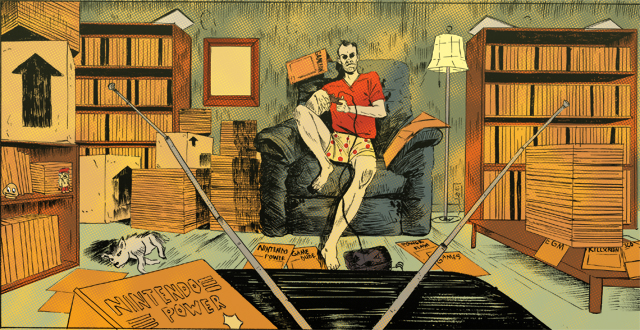 Shelves lined neatly with Nintendo Powers, a chronology of Primas, serial categorization of Bradys, the alphabet of Versus, or the evolution of the Pokédex. Stacks of DoubleJumps, the works of Working Designs, voluminous Enterbrains, a catalogue of GameFans stashed away for one day. Great and small, varied and specific, arrange them as you may—these are the things of a collection of strategy guides.

The strategy guide is a book of stuff; it’s pages containing the contents of a game. Within are directions to 100%, secrets to boss-battle beating, special-item inventories revealed, character stats and stories, stage maps and such. The strategy guide presents as a resource, but the collectibility of the guide seems to have little to do with guidance. Collecting is not about a single or simple meaning. The meaning is as many things as there are things in a collection.

There comes a point when some things become a collection—at which point collecting becomes the point.

Walter Benjamin ponders the purpose and pleasures of collecting in “Unpacking My Library: A Talk About Book Collecting.” This is the story of a personal pursuit of literary objects and the magic of collectorship inspired by 12 hours spent unboxing and arranging his books after moving home. Benjamin describes how individual books evoke memories of the time and place they were read, or of the specific events surrounding their purchase; and how beholding them reminds him of the unique qualities they possess. The act of unpacking his library allows him to recollect the items as though he were re-collecting them.

The most profound enchantment for the collector is the locking of individual items within a magic circle in which they are fixed as the final thrill, the thrill of acquisition, passes over them … the period, the region, the craftsmanship, the former ownership—for a true collector the whole background of an item adds up to a magic encyclopedia.

The “magic circle” that Benjamin refers to is a familiar concept in games discourse. Here, and in games, it is a circle of much the same radius: an area permitting fantasy protected from the real-world.

The magic of the guide may be specific to time and place, like acquiring Nintendo Power’s limited miniature edition—Pocket Power—only distributed at selected screenings of The Wizard (1989). There is a magic in the difference between objects, like in the plethora of “official” and “unauthorized” guides and material printed by different publishing houses. The collector might connect with one specifically or enjoy the differences between them. The magic might be in the content of the guide—a preferred formatting of information, or exclusive artwork in Million’s The Legend of Zelda (1986) guide. The magic might belong to the history of an acquired guide, like the mystery of the missing stickers of a Lunar 2: Eternal Blue Complete (Working Designs: 2000) book or the poster pulled from the pages of a Banjo-Tooie guide. Magic might be the condition of a guide, whether it be loved and weathered or pristinely preserved. It could be in the aesthetics of de lux editions like the sparkling Super Mario Galaxy (Prima: 2007) books, the beautifully bound Dragon Age II (Piggyback: 2011), or the Metal Gear Solid 4: Guns of the Patriots (Prima: 2008) trapper-keeper edition. It’s something in every one of a series, in the obscure in the last copy on the shelf on release day. The magic may be in any of the millions of specific ways in which objects are specific, so Benjamin’s thesis seems to resonate.

In games discourse the “magic circle” surrounds a player, allowing concentrated pleasure on the activity without too much disruption from real things. Of course, real does permeate in all sorts of ways; base biological needs do not go away; and worldly experiences may be influential to gameplay. But, inside is the pleasure zone, and outside can matter a little less in the immediate. The problem with this concept—as applied to both games and collecting—is that it creates neat little bubbles; and while the magic of collections and playing may indeed float merrily within, the example at hand collides them.

The strategy guide is inherently linked to games. It’s a bit of ancillary sourced from a game, and so the collecting of guides strongly implies a connection to games. The collectible magic in this case comes collectively from the guide and games. If a player finds pleasure in playing, collecting is the extension of that pleasure when the console’s off and the circle disappears.

Gotta catch ’em all, find pairs, collect all coins, roll your Katamari. With collecting as one of the most established mechanics in games proper, it is not surprising that collectorship presents as a mode of celebrating outside of gameplay. One plays in a circle and one collects in another, and rings close around these doings as discrete events; but the collecting of reference materials crosses circles. Collecting a guide crosses into the game; playing a game with a guide crosses back. This is a case of ever-increasing circles, a nexus of shapes in which the magic moves around the geometry.