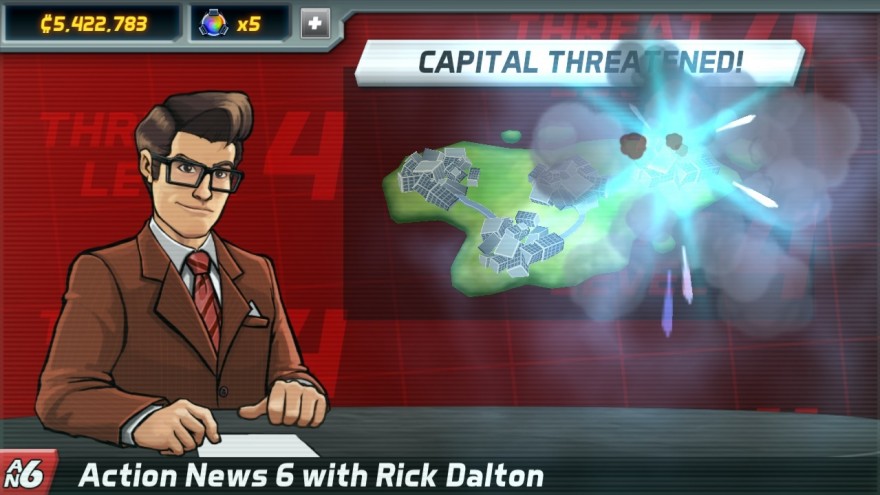 Each time I boot up Halfbrick Studios’ Colossatron: Massive World Threat, I am greeted with the styled coiffure and glassy stare of Rick Dalton, Action News 6. Rick is my favorite part of Colossatron: his newsman’s smirk and cocked eyebrow, the way his expression never changes when he relays to his viewers that entire continents have been laid waste. In between stages, Rick offers gems like “Another city bites the dust. There’s just no stopping Colossatron!” in a monotone that suggests that he couldn’t be less interested in the ultimate outcome of the battle for Earth. He is obviously a man who has been reading the news for so long that even a gargantuan robotic snake from beyond the stars crash-landing in the middle of major metropolitan areas doesn’t faze him.

If anything, he seems to be rooting for Colossatron to win. Whose side are you on, Rick Dalton?

But then, whose side are you on? Colossatron puts you in control of a giant, slithering, city-destroying monster. Actually, that’s a lie—Colossatron puts you in aid of a giant, city-destroying monster, as the game affords you little direct control of the creature’s path, and you’ll spend your first several runs at the game watching the eponymous monster ambling merrily along in whatever direction it pleases, crushing buildings and shooting bolts of lightning at tanks and helicopters that have the temerity to approach it. You will spend your time sliding primary-colored orbs into place in the creature’s segmented body, where they become tools of destruction for Colossatron to continue its indiscriminate rampage.

A lot of the pleasure to be found in Colossatron is tactile: there is a satisfying KA-CHUNK when you slot a new segment into the beast’s body, a pleasure that’s intensified when that piece combines with others like it to form a larger, more powerful weapon. Like any match-three game, the best moments come when you’ve stacked a whole bundle of like segments next to each other, and more than one transformation occurs in succession, crunching together into an out-sized railgun or missile launcher.

At first, there doesn’t seem to be much strategy inherent in the game: by mashing different segments together, you can create a purple weapon or a green one; you can stack all of your blues together to create a Big Blue Gun, or you can combine them with some yellows to create a Medium Green Gun. Stick with it a little while, however, and subtleties emerge—if you want to clear the higher stages, for example, you’d better make sure you’re building enough healing segments, and you won’t get very far if you can’t commit to an order to your Space Snake that allows for some sizable ordinance.

Still, a play session of Colossatron is an inherently chaotic experience, and if you are to enjoy it, you must make peace with the fact that eventually, there are going to be so many things filling your screen that strategic play becomes impossible. A point will come at which you can barely make out your little avatar of destruction beneath the sea of aerial squadrons and “boom trucks” (apparently a thing), and Colossatron will come apart at the seams. There is a kind of joy to be found in the frantic scramble that ensues, slamming every new segment you see somewhere—anywhere—in the hope that Colossatron will keep chugging long enough to accomplish your objective before being utterly annihilated. It’s akin to the final seconds of a game of Tetris: the panicked attempt to stave off the inevitable, the chuckle of relief when the inevitable occurs.

It feels more like a shiny toy than anything else.

The game has two different units of currency, and the scarcer of the two can be purchased with Real World Dollars. In my time with the game, I was never enticed to, and I wonder if many will be. Colossatron is delightful, but it’s not particularly compelling. It feels more like a shiny toy than anything else, and the real pleasure in such a thing is simply taking it out to play with it—in beholding that tacticle KA-CHUNK again and again. Success and failure seem immaterial, or at least there’s as much fun in one as in the other.

Rick Dalton is as much evidence of this as anything. “From all reports, Colossatron is looking unstoppable!” he says, smiling, after another city has been transformed into a smoking crater. He stares knowingly at the camera, wearing the same smirk whether you are winning or losing: “Colossatron has been destroyed and the world is at peace,” he says, if you fail. “But for how long?”