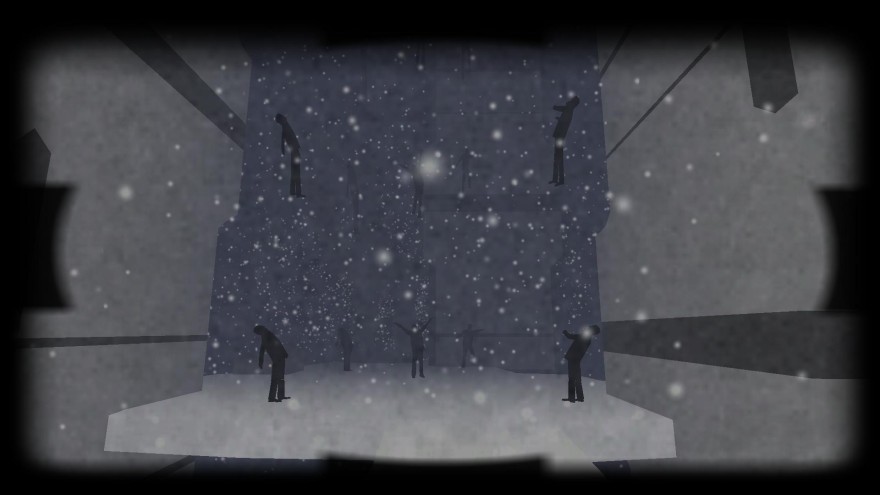 Nuprahtor told me that he tries to “realize a certain single idea, a concept” in every one of his short, experimental games. It could be closing your eyes to stay alive, surviving in a bizarre well, or attempting to cross an empty battlefield.

Each of them is succinct in form and expression, which makes the haunting idea at the center of them potent and everlasting. Even if you can’t understand his games, you can feel them writhing under your skin, following you into the coziness of your bed.

strung like puppets in mid-air as if painted into Botticelli’s interpretation of Dante’s Inferno.

He often (not always) titles these games as “Composition” followed by a number; case in point, his latest, Composition 83. The idea of all videogames as a composition is apt—they bring together many art forms into one wholesome media—but Nuprahtor’s compositions are more specific than that. They’re thematic explorations of war, death, and madness filtered through his preference for gray tones, screen fuzz, silences pierced by noises of terror, and lonely night time walks—macabre abstractions.

By only making very subtle changes to the stylistic elements of each game, Nuprahtor says it allows him to enlarge the setting his games take place in. He clarifies: “By that I mean some kind of an in-game world that grows and develops with new creatures, rules, recurring objects one can recognise, such as the streetlights.”

While not at all necessary, if curious you might want to play through all of Nuprahtor’s games before arriving at Composition 83 in order to broaden your awareness of this liminal world he shares.

As with all of Nuprahtor’s games, Composition 83 is best experienced first and read about later, unspoiled. But as you’re here now, let’s settle on imagining it as a videogame directed by Chris Marker and based on Dmitry Glukhovsky’s post-nuclear war novel Metro 2033, resulting in a poetic, elegiac documentary experienced from the first-person perspective.

The weight of the radiation suit you wear to traverse the disaster site is described through your exhausting movements, your heavy and slow breaths. Even turning your head is a laborious process. Trudging through the ash steadily rising toward the gray sky brings you to the dramatic and dreamy sight of bodies frozen in agony. Some are strung like puppets in mid-air as if painted into Botticelli’s interpretation of Dante’s Inferno.

After passing scattered buildings that might be twisted forms of those found in Nuprahtor’s heart-breaking multiplayer city stroll Rainwalkers, you come across another recon trooper, just like you. It triggers a moment that could have easily been lifted from the haunting time-travel narrative of Marker’s own post-war science fiction, “La Jetée.” You question if this still figure could be you; a horrifying precursor of what will happen up ahead. This is passed off as absurd by your superior but you can determine the integrity of that remark for yourself upon experiencing the game’s ending.

You can download Composition 83 right here. You can see all of his Nuprahtor’s games on his website.