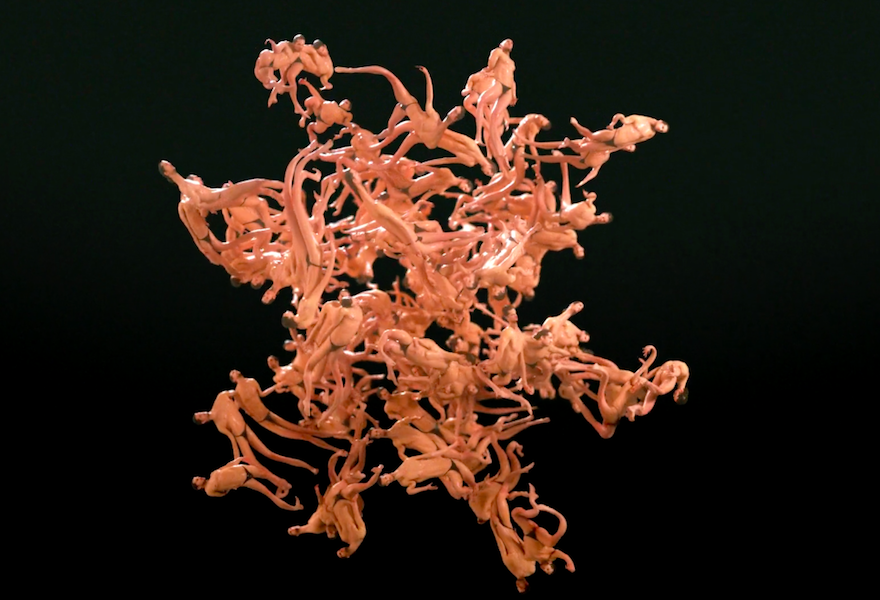 A mass of speedo-clad elastic men floating in space—just human enough to be unsettling. They don’t move of their own volition but, rather, succumb to the physics of zero gravity, writhing and contorting around each other. It’s as as if an astronaut has sneaked her childhood collection of Stretch Armstrongs onto the International Space Station. This is the bizarre reality presented by computational artist Albert Omoss in his most recent short, Undercurrents.


According to his website, “Omoss’ art practice relates the axiomatic structures of reality to the anthropocentric ideals of technological innovation,” which could perhaps be translated to mean that his work is an interrogation of humanity’s place in the universe. It poses the question that if reality is already fully established separate from our own society, can we ever really import our own will onto it, even with all of our technological advances? Ironically enough, Omoss does this through the use of code, first writing software simulating “intricate systems” and then using that software to create visual art, not unlike Jaume Sanchez Elias, the man behind confetti-simulator Polygon Shredder. In fact, my first thought upon seeing Undercurrents was “This is like Polygon Shredder, but with naked dudes.”

Undercurrents is actually the latest in a trend across Omoss’ work, which has slowly transformed from bright and cheery ads for companies like Keebler and Google to videos about masses of bendy people contorting together into new and surreal shapes. Forms, for instance, uses a dozen or so leatherclad men to create a worm, as if the Cirque de Soleil decided to interpret an episode of Voltron. Entangle features a more intimate experience, focusing on a man and a woman as she slowly wraps her body around him like a boa constrictor and dips her hand into his heart. Plug Party is about a man helplessly falling through the pegs of a pachinko machine. Of these works, Entangle seems to give its characters the most intention, while Plug Party and Undercurrents instead render the human body as the plaything of the reality around it.


But that in itself is not entirely at odds with Omoss’ message. Without sound, what I saw was all the presumed power of the male body being quite literally deflated, turned into a noodly collection of feet and chiseled jawlines. Just as the more serious version of Undercurrents I experienced when watching it later with headphones had me considering how insignificant humanity might be in the face of an uncaring universe, my comical first viewing was all about making the intimidating small. As Omoss’ About page explains, “His personal pieces often explore the fragility of the human form.” You can experience this fragility for yourself over on his website.