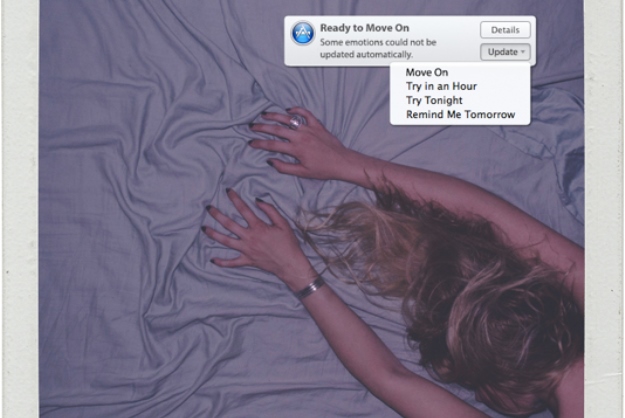 Getting over a broken heart or a moment of personal crisis is certainly not as easy as clicking “delete” to empty your memory files. Brooklyn-based graphic designer Victoria Siemer illustrates just how painfully real that fact is through her ongoing series called Human Error.

Siemer updates her Tumblr every week with new polaroid images that feature iOS-style computer error messages that say things like “Are you sure you want to erase all feelings?” or “He broke your heart unexpectedly.”

The images sometimes feature error messages that include options for the user or prompt them to wait or select an action, and sometimes they just inform or deliver a poignant line that is all too real and familiar. Other images simply show a loading icon or a progress bar showing how much time is left before the “heart is emptied.”

According to the designer, the series stemmed from an unfortunate incident with Photoshop. An error message saying “Photoshop has crashed” popped up on her screen and she took a screenshot of it to make a joke about how Photoshop broke her heart. This inspired her to create a series with different computer error messages conveying the experience of heartbreak.

The graphic designer started the project with photographs pulled from Flickr’s Creative Commons, then moved on to creating and manipulating her own images. She currently uses actual Polaroid film which she scans and edits to add a modern element through the error messages.

The images themselves are already intimate and emotional in nature and, when paired with the computer error messages, evoke a sense of nostalgia and effectively portray the emotion of the human experience they depict.

The series can be found on Siemer’s Tumblr and Behance page. View some of the images from the series below.