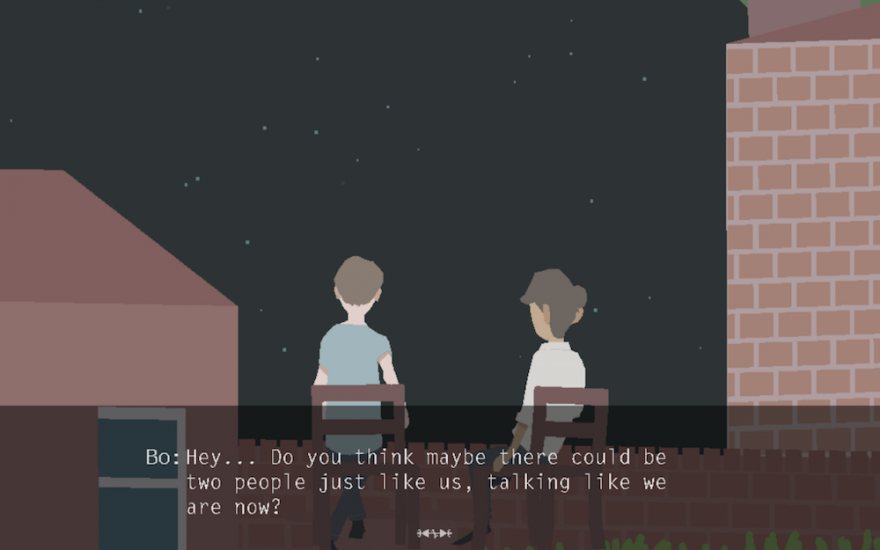 New game Friary Road takes place after everyone else has left the barbecue, when the coals are still warm and the stars are getting bright and you’ve had just enough beer to start thinking about how far away they are. It was made (in a day, though the jam deadline was a week) for the recent Fermi Paradox Jam, which asked game makers to consider this contradiction: if aliens are out there, and statistics say they are, why haven’t they contacted us? Many of the games take you on adventures in spaceships and have you confront the aliens about their absence or try to isolate the reason for the silence.

Friary Road takes the opposite approach. Emphatically down to earth, it’s a short vignette of the most human of moments: looking up at the sky and asking questions. Civilizations have done it for centuries before now, weaving tales about the constellations and creating their own versions of truth about why the sky is dotted through with pinpricks of light. Now we have science and adamant belief systems, so the questions get more specific. How far away are they? What are they made of? What role do they play in the universe? And like the jam asks, why does it seem like they’re alone?

My own Friary Road moment was my first night in the mountains of Austria, when I was a quiet little exchange student who was still unaccustomed to the European sky. A life spent in Midwestern cities gives a very one-dimensional image of what night looks like—dark, dim, squinting to draw constellations through the light pollution. That night I dragged the duvet off the hostel bed and onto the balcony, and curled up underneath it with a friend who was in the same boat as I was. Part of it was the end of the night melancholy that lingers in smoldering barbecues and slumbering alpine towns everywhere. Part of it was just being 16. Anyway, I asked my friend if she would ever go to space and she said it was probably cold up there and it was like I had never seen the stars before.

Bo and Ao of Friary Road, they have the same conversation. Sure, it’s Britain instead of Austria; teenage confusion is replaced with reluctant anxiety; they actually found images in the sky instead of just plotting a hypothetical trajectory. But at the end of the night, in any corner of the world, when two people are alone and looking at the sky, the conversation is more or less the same.

Play Friary Road here and take your pick of all of the wonderful Fermi Paradox Jam entries on itch.io.