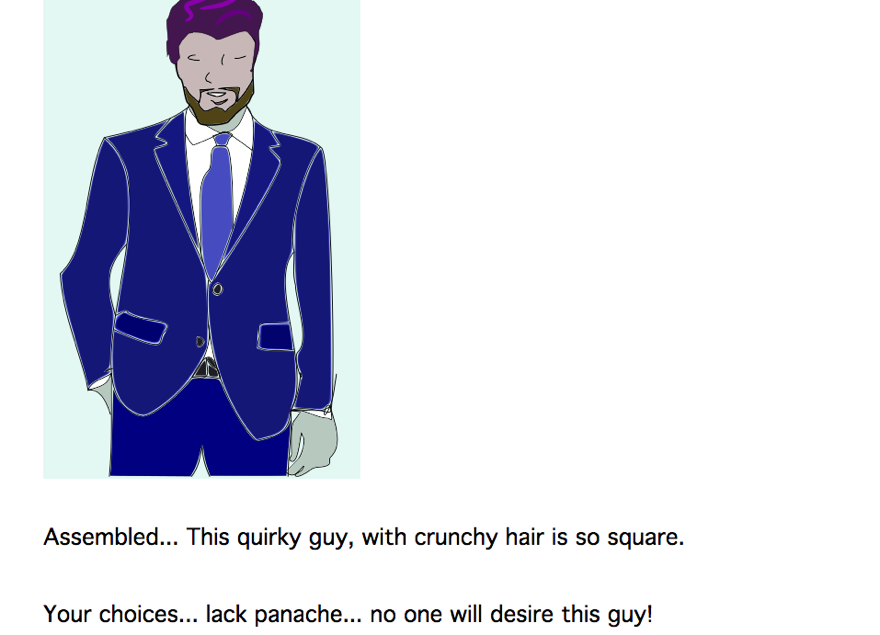 What do aliens see when they look at One Direction? Do they see, a musical monstrosity straight out of Simon Cowell’s fever dreams, a band that can melt your heart with sincere ballads like the sublime “Gotta Be You”, or a blank cultural canvas that can be used to take over the world?

use your boy band to wipe out all of humanity

In Intergalactic Alien Boy Band Conquest, an entry in the 32nd Ludum Dare game jam, the aliens have gone with the third option. Using a boy band proxy, they are going to take over the world, and they need your human help designing the mega-group for maximum effectiveness. The aliens, like the tweenaged demographic you are helping them win over, are picky customers. If they think the combination of hairstyles, clothing, and personalities you have devised is inadequate, they will kill you. Doing an adequate job leads to an arguably worse outcome: the aliens spare you but use your boy band to wipe out all of humanity. Your only hope for escape is to design a boy band that is so overwhelmingly cute that the aliens die of shock. Good luck with that.

Intergalactic Alien Boy Band Conquest very much embodies the latest Ludum Dare theme, “an unconventional weapon.” It also feeds into the mythologies that tend to emerge around boy bands. In One Direction fandom, for instance, there is a relatively common belief that the band is completely controlled by Modest Management. Yes, that is actually the name of their management company. And yes, in a narrow sense, it’s reasonable to believe that boy bands are controlled by executives. That reasonable belief, however, can easily morph into conspiracy theories. Thus, some fans believe that all members of One Direction are secretly gay and/or in love with one another.

Amanda Hess notes that fans dismiss denials of this ‘truth’ as “finely-calibrated statements handed down from “The Management,” a shadowy force some fans believe is suppressing gay love to sell records.” Similarly, when Zayn Malik (the brooding one) left One Direction in late March, a subset of the band’s fans insisted Modest Management had ousted him. In protest, they launched hashtags like #WeHateYouModest and #WeHateModestManagement.

Management is the enemy of humanity

This strategic positioning of the band vis-à-vis management is not limited to fans. Bands can and do get in on the act. As they age, there is no better way to frame their growth than through their newfound independence from the shadowy cabal that once ruled their lives. This form of rhetorical posturing was mastered by Take That, the British five-piece that broke up in 1996 and reformed as a quartet in 2005. On their 2006 reunion tour, they performed a dance number called “Apache.” It was scored to a series of edicts from a fictionalized manager, including: “The boys must always be ambiguous about their sexuality. Never confirming their sexual orientation will encourage the homosexual sector of the market.” The manager, who lip synchs these rules, is dressed up like Dr. Frankenstein. Towards the end of the sequence, the four grown band members proclaim “I did it all for you!”

Is it any wonder that boy band fans feel like managers are aliens hell bent on destroying humanity? When it comes to something you love, it’s always hard not to impugn the motives of opposing forces. It’s harder still when various parts of the boy band universe play into these tropes to stay relevant. Intergalactic Alien Boy Band Conquest is merely the logical extension of this world view: Management is the enemy of humanity and our only hope is the overwhelming cuteness of five performers!

Check out Intergalactic Alien Boy Band Conquest’s Ludum Dare page. You can play it in your browser.