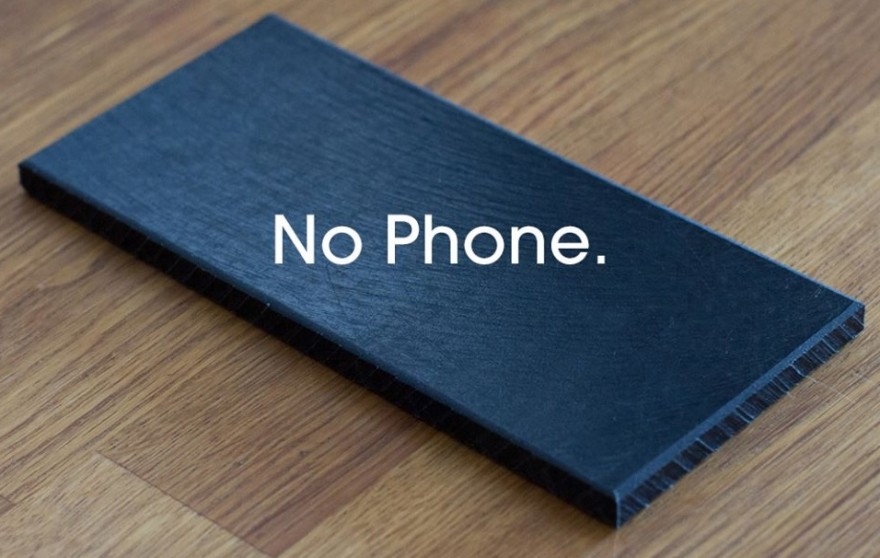 Every day some poor soul decides they’ve had enough with papers flying off their desk and buys a paperweight. The object’s main quality is that it is an object. Virtually anything meets this minimal threshold, but our poor soul has left their house to spend actual money on a dedicated paperweight. This is the standard against which the sale of all objects must be judged.

It is consequently the standard that comes to mind when examining the website and Kickstarter page for the NoPhone Zero, an iPhone sized block of plastic that does nothing whatsoever. That is the whole point. Hahaha, isn’t that funny? The NoPhone does not do calls, or texts, or photos, or how about you just take a gander at the comprehensive list of functions the NoPhone does not offer do that is helpfully provided on its website?

Here, on the other hand, is a not-entirely-comprehensive list of the things you can indeed do with the various pieces of hardware and software Apple unveiled last Wednesday:

It’s all a bit much.

NoPhone Zero and its sister-products like the NoTablet seek to mock these never-ending lists of features, but their satire is imprecise. Sure, it’s silly to spend hundreds of dollars on a Hermes watchband that wraps around your wrist twice (TWICE!!!), but donating to the Kickstarter campaign of a paperweight you keep in your pocket is similarly farcical. By design, the NoPhone Kickstarter basically outsources the cumbersome task of burning your money in protest at the absurdity of consumer electronics. Someone’s making money here, but at least it’s not Apple. Is that really a protest?

Owning a phone is about performance. Knowledge of what your phone can and cannot do is not transmitted through spec sheets so much as your behavior. The direction in which your phone is facing as you take a selfie, for instance, transmits its vintage. Though it serves as a rejection of Apples spiraling lists of features, the NoPhone retains this performative quality. It makes a big show out of doing nothing. Look at my thing that does nothing becomes the new look at my high-res screen. There are other ways to make this point about technology—using a flip-phone, for instance—but where’s the joke in that?