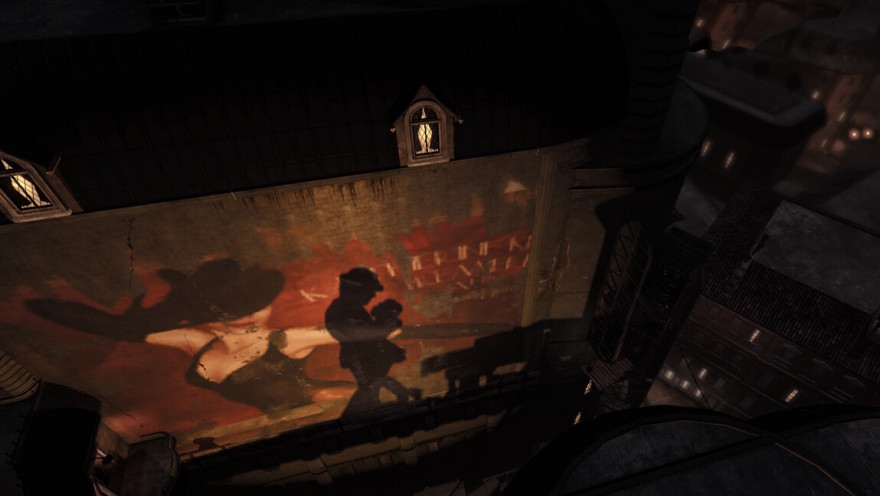 It’s no surprise that half of the platforms Contrast appears on are Sony’s. Thematically, it complements other artistically stylish PlayStation games where children escape into a magical world, often to defeat a dark presence that can only be conquered in the safe realm of imagination, where there’s a measure of control. The adult world is just too scary.

But unlike Papo & Yo, which deals with child abuse, and Rain, where children become invisible yet find each other against impossible odds, Contrast is not about fleeing into an imaginary world, where solutions can be found through wonder and innocence, as a way to cope with the harsh reality of adults. We don’t even play as the child, Didi. Rather, we control her invisible friend, Dawn, who helps Didi salvage her father’s troubled circus and bring him and her mother back together.

However, like the aforementioned games, Contrast is about viewing the world through childlike possibility. Dawn can melt into the shadows on walls and walk across the shadows of clotheslines, carousels, and other objects. She can dash through thin shadows and “shift” objects in and out with her. It’s beautiful: In this puppet show of shadow, the colorful neon signs and glowing lights that seem to emerge from thin air are in contrast with the dark, rain-slick streets and dead quiet of Paris at night.

The magic is in the illusion, the show that Contrast puts on. This is no ordinary Paris.

The magic is in the illusion, the show that Contrast puts on. This is no ordinary Paris. Didi’s parents and everyone she talks to are mere shadows, and players might begin to wonder whether they actually exist at all. Streets break off into cliffs and spiral into nothingness, an empty abyss where chunks of rock and pavement float by in the starlight. It’s no safe place for a child.

And I can’t help but feel, as the camera centers on Didi standing alone and talking to Dawn, who’s almost always out of frame, that this might all be the elaborate fabrication of a lonely, troubled girl.

Contrast toys with this idea. One collectible that you can find is a letter from child services that refers to Didi as a “mentally disturbed child,” to which her mother responds and pleads that she merely has an active imagination and to please not take her away. It’s quite possible that Didi has constructed, not retreated to, a world where life works as it should—where she can save a failed relationship and turn enemies into friends.

She’s good at fixing things, she says, taking the credit time and again for Dawn’s work in the shadows. So much in her world is broken.

Players repair stage lights, an indoor roller coaster on a pirate ship, a tangled hot air balloon, and so on—one by one correcting her father’s mistakes. He’s gotten in deep with gangsters (his “investors”) and owes them a lot of money, and only by securing the illusionist the Amazing Vincenzo’s presence at the circus can he pay them off and win back his family’s trust and affection.

It’s not a friendly world: Didi’s mother leaves her alone every night and actually threatens to shoot herself if Didi’s father comes back. For his part, her father wants nothing to do with her, and the loan sharks scare her so bad that she’s afraid they’ll hurt her mother as they do her father.

As fascinating Contrast is as an examination of loneliness and instability in children, it shies away from that angle. Like the fairy-tale shadow play that Dawn and Didi perform, where the princess saves herself and her future husband and everyone lives happily ever after, developer Compulsion Games constructs a mushy, incredulous ending that disregards all traces of an original story.

The game reveals that yes, Didi is special and talented and smart, and everyone loves her, and everything will be well again.

Throughout the game’s four hours, players collect a number of memorabilia that unravel the truth about the shadow world, including how Dawn came to be in it. They then climb a giant lighthouse, jumping and walking over shadows that speak in echoes and pull together the distant threads of the plot, recalling words Didi’s mother and father said to each other and hinting at a bigger meaning. But there is no grand realization. It’s squashed when the game reveals that yes, Didi is special and talented and smart, and everyone loves her, and everything will be well again.

It might as well be illusion—it’s too neat and convenient a resolution.

At least games like Papo & Yo and Rain are brave enough to confront the source of their children’s fear head-on: to face an abusive, monstrous father and a seemingly unkillable beast and issue a challenge. Contrast only seeks to cover its ugliness up and make it disappear. Abra kadabra.