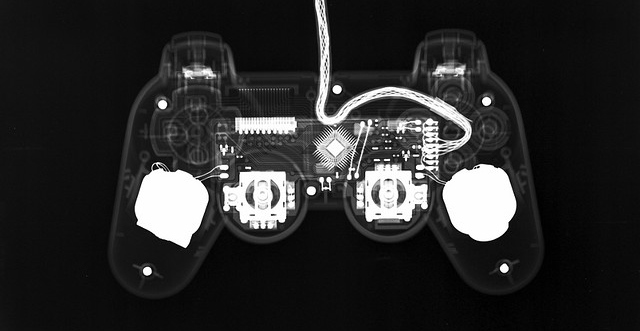 Way back when we launched the now-vanished Issue #0, we ran a feature on the state of videogame controllers. Controllers are devices that we spend so much time holding, but very little time actually thinking about (except when they bother us). One of the experts we pulled was Nicolas Nova, a consultant at Swiss research agency Lift Lab. We caught up with Nicolas to talk about the future of game controllers and why he thinks the Super Nintendo controller is a paragon of design.

Why did you even get interested in videogame controllers?

The first motivation was really because I like these objects. They’re fascinating as artifacts. They’re shaped to fix certain problems. The second thing is that I’m teaching interaction design. Students have a limited history of technologies, so using game controllers and showing how they evolved is a way to show the importance of a particular artifact. Using gamepads is a good way to teach them this type of the approach, because most [design] books are about engines or old, strange technologies that people don’t care about.

The third motivation is that controllers are interesting themselves, because they’re physical objects, but at the same time you are able to control a virtual environment. I’m interested in user interfaces and virtual environments. It’s important that what you create on the screen is influenced by the cultural context.

What’s unique about game controllers in the world of design?

Games are the kind of applications that are not necessarily functional. The aim of the game is not to press a button. It means that the interface on the screen and controller should have specific aspects that make it engaging. Game controllers are both functional—because you need to control your character—but they should also be fun.

I’ve always wondered if this idea that videogames are something you do in front of a screen with a controller might someday seem archaic. Do you think controllers will ultimately disappear?

The first path is with things like Kinect, where your body is your controller. This is OK for a certain type of game, but I don’t think it could be expanded to just anything. It’d be tough to play a war game or Warcraft.

The second avenue is the standard gamepad like the keyboard. The keyboard is not very efficient, though, because it’s based on the model of typing machines. We’ve put the different levers on the keyboard in a certain way so that you can’t type too fast.

I think there’s a third way where simply objects that are a certain shape become game-related controllers. There could be sensors in an object, for example. There could be a bunch of sensors you could put on a tennis racket to make your own game controllers—to use the everyday object to make new forms of games that are not about gestures, but about certain kinds of things.

What controller for you is the paragon of good design?

There’s not one, but the Super Nintendo [controller] is a good one. It’s balanced with the directional pad, and you have two shoulder buttons that make it consistent. It was one of the best, I think, for a broad audience of gamers. The evolution of the PlayStation controller has been consistent and evolved over time in a pertinent way. I found the original Xbox far too clunky and difficult.