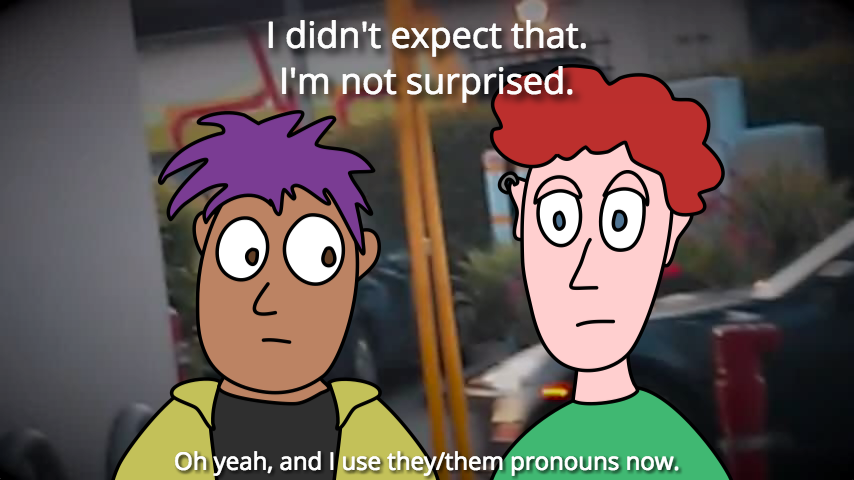 I say all the right things while you listen. The words flow out of me, succinct but illustrative, considerate yet direct, honest but not too harsh. You mostly listen, affirming here and there or otherwise complicating what I thought had happened (which I thank you for). We’re two people who knew each other once, but now dance around who we’ve become since. We don’t skip a beat: our movements deft, complimentary even. We navigate the space between us while never stepping on our partner’s toes. Simultaneously, who we are is both fixed and malleable.

Then my lunch break ends abruptly, and I must leave the daydream behind. Back to reality, where the fantasy of justifying my own existence perpetually replays in the back of my mind.

Mx. Deirdra “Squinky” Kiai makes games about social constructs like gender and awkwardness. Recently, they released Conversations We Have In My Head, an exploration of identity through the lens of past relationships. Lex and Quarky used to be intimate with one another. Now, they try to justify who they’ve become to themselves in a real time conversation with two distinct narrative paths. While Quarky rattles off their monologue, the player can respond as Lex, imbuing the conversation with layer upon layer of imagined constructs.

You can play Conversations We Have In My Head for yourself for free on Windows, Mac, and Linux.

KS: How did you tailor each version of the conversation to the player’s dialogue choices?

I wanted to contrast the feel of most other branching narratives, so I focused on the conversation as a real time event. So, if you don’t act in the moment, the opportunity to make a particular choice will pass you by as the conversation moves on to the next topic. I made a conscious choice for the player to be able to interrupt the current dialogue rather than force them to wait until Quarky is done talking—this is a similar mechanic to the one in Interruption Junction, a previous game of mine, only this time, it’s more about interrupting one’s own train of thought as opposed to actually interrupting others.

“to prove that we are better people now”

KS: Why do we have these conversations in our head? What are the emotions that fuel that fantasy?

Regret. Unfinished business. Wisdom that we’ve gained from life experience that we then fantasize about showing off in order to prove that we are better people now. The dreadful feeling that there are people out there who remember you as a younger, less mature version of yourself than the person you are now. And that frozen-in-time person they remember probably did some terrible things that you wish you could undo, or at least erase.

KS: Your games tend to come from personal places. How does it feel after you put them out into the world? Scary, exciting, vulnerable, empowering? Some combination of all four?

Oh, definitely a combination of all those. There is definitely an inherent anxiety in putting parts of yourself out there, but the worst case scenarios I play out in my head are always way worse than the stuff that actually happens. Also, a lot of positive stuff comes out of sharing, like people who talk to me about how they can relate to my work and I feel a bit less alone. The negativity tends to come less from people who are deliberately out to hurt me and more from people who misunderstand what I’m trying to say, or don’t understand why I’m saying it in the form of a game, or don’t understand how what I’ve done can possibly be “really a game.” 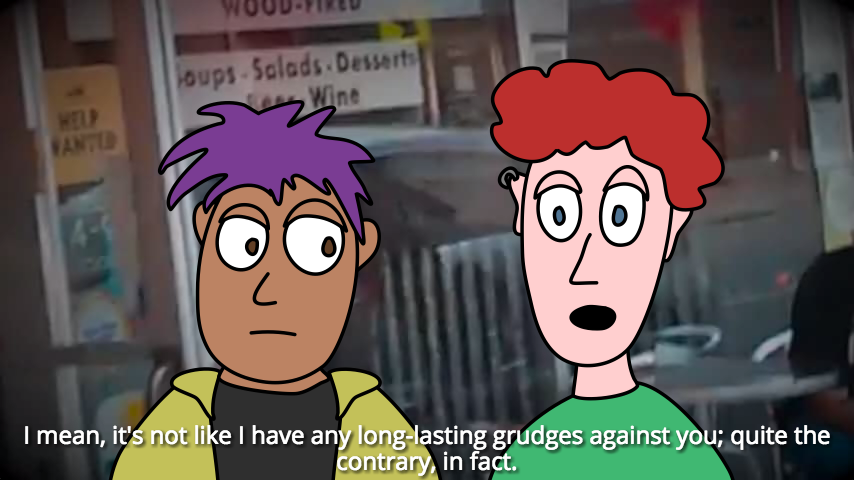 With Conversations We Have in my Head, in particular, I’ve seen some reviews discussing the game as if it were a straight up autobiography. Which it isn’t, actually. I’ve written other games that feature some version of myself-as-a-character, but this isn’t that kind of a game. It’s based partially on real people and events, but fictionalized and edited to make for a more coherent story—it’s more like two truths and a lie. But because the character has a similar gender identity, people assume it’s literally me. That wouldn’t happen if I were a white guy writing about a white guy, since white guys are seen as more Universal Representatives of Humanity than genderqueer people of color. Even when white guys do explicitly write autobiographical games—like Jason Rohrer’s work—they don’t get lambasted for writing what basically amounts to self-insert fanfic, and aren’t nearly as commended for being “so personal” or “brave” or whatever.

That being said, I can’t imagine making games any other way. When I first started, I thought I had to make games that were like the games I played growing up. Later, I learned that games can be so much more than that. This mindset in itself comes with a lot of backlash, but so does anything that tries to do something new in any medium.

KS: Obviously, we all have these conversations in our heads. But do you think this is a particularly prevalent experience for some LGBTQ people who’ve had to go through transformations?

Coming out to people in our lives as something other than cisgender or heterosexual—in a society where most people expect those to be the default setting for human beings—is a relatively common process, yet can vary immensely for different people in different life circumstances. The story of Conversations is one of someone who came to know of their queerness in their mid-to-late twenties trying to justify themself to someone who has “always known.” The contrast between Quarky and Lex mirrors the tension between these socially agreed-upon ways one is supposed to understand and present their queerness versus the often-messy reality of people’s actual experiences.

When we come out as some flavor of LGBTQ, we second-guess ourselves

Quarky is genderqueer, but worries that Lex won’t believe them because Lex grew up frequently being mistaken for a boy whereas Quarky never was. Lex reads as butch/transmasculine and is attracted to women, like AFAB (assigned female at birth) queers are supposed to, whereas Quarky is more effeminate and is asexual, and therefore perceived as less “authentically” queer. The subject of self-realization and coming out later in life as opposed to “always knowing” is also explored in Caelyn Sandel’s serial Twine story, Bloom which I highly, highly recommend.

The complicating factor in Conversations is that, of course, the Lex being portrayed isn’t the real Lex, but an imagined version of Lex. So it’s this additional layer of self-judgement and self-questioning that appears on top of societal homonomativity. When we come out as some flavor of LGBTQ, we second-guess ourselves: Am I really? Do I have the right to call myself that? What about this past experience I’ve had? Or this? That’s not how queer people are supposed to be. Maybe I’m not actually queer? But I’m not straight/cis, either? Now what?

KS: Have one of the conversations you have in your head ever manifested in reality? How’d it go?

When I run into exes after some time away, it never quite turns out the way I expect. It’s usually a relatively mundane interaction. I’m also never as witty and quick-thinking with my words as I imagine myself to be, so I don’t get to say any of the things I wanted to say. 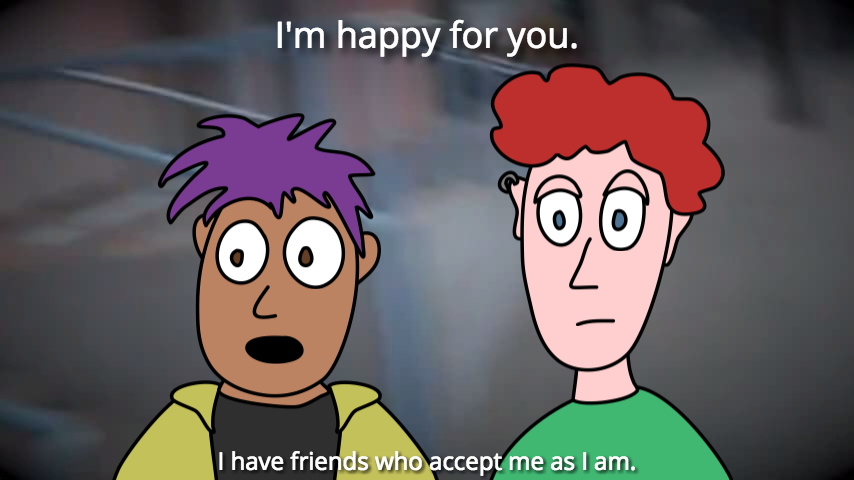 KS: Why do we have these conversations in our heads? Is it therapeutic in some way, or mostly destructive?

Well, the thing is, I’ve tried to make it clear that the Lex being portrayed is not the real Lex, and I think a lot of the assumptions being made about who Lex is are unfair, particularly given that they’ve been estranged from Quarky for years and likely have changed a lot since then. (This is another reason why I wrote Conversations as a deliberate fictionalization: it would be horrible to actually depict any of the people the story is based on without their consent.) I used to be the kind of person who always wanted closure when relationships ended, but later learned, through the wisdom of people like Captain Awkward that at some point, you just need to let things go and move on with your life. I’d say that having conversations with your exes in your head is a bit like picking at scabs, in that it isn’t always good for you even though you’re probably going to do it anyway, and it’s probably best not to involve other people in the process.

This interview has been edited for length and clarity.