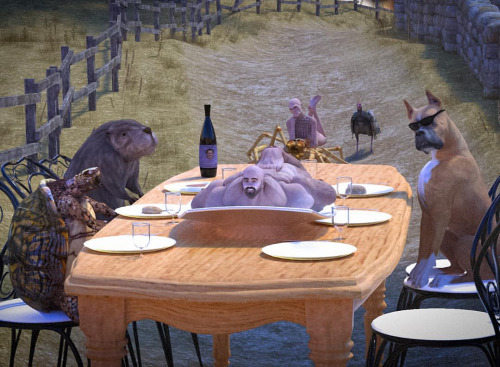 Why are there huge brawny, hairy men? Why, oh why, are they acting so intimately (and hungrily) with disfigured pigs? And why are they so often seen screaming with heavy anguish into the sky?

These are all valid questions about Cool 3D World that probably don’t have an answer. The one question that can be answered, however, is this one: What is Cool 3D World? It’s a collaboration between two web artists. They are Brian Tessler and Jon Baken (who helped make Staggering Beauty (warning: flashing images)). I’m told that they met through mutual friends and discovered they were fans of each other’s work, so joining forces seemed a worthwhile endeavor. Since that meeting and throughout 2015 the pair has been posting their sublimely unpredictable 3D animated shorts on Vine as well as images that accompany each baffling scene (as if a snapshot to remember them by, forever).

It’s Vine that Cool 3D World has found its popularity (into the millions) and, indeed, the format works especially well for it. Tessler explained why that’s the case: “Vine is great for coming up with short ideas and being able to see them through relatively quickly due to the six second limit. Unlike gifs, Vine allows you to add sound, so we’re able to make funny clips with music and sound design. It was a good meeting point for both of us to figure out our workflow, and make immediately rewarding content together.”

data errors as a way to illustrate extreme emotion.

Importantly, both Baken and Tessler don’t have specific roles in Cool 3D World. What’s prioritized is a creative spontaneity. One of them will have an idea, jump into 3D animation software, and try to hack it together. At some point the other half of the project will join in, maybe add a few bits, and then music and sounds typically arrive after the visuals are locked down. Strangely, this process comes across as being a lot more experimental and loose than Tessler’s solo work, as he described it to me earlier this year, even if it is aesthetically similar. Back then, he told me he was trying to bring out the expressive potential of 3D models and electronic music. This is why he seemed to strain it, make it crude and warped, and also make special use of data errors as a way to illustrate extreme emotion. Tessler told me that he’s inspired by classical musicians and how they used traditional instruments to achieve a high level of emotion, applying a similar creativity to the modern applications of today.

This is why, when one of Tessler’s weary-looking faces stares at you and degenerates into a portrait of a nightmare, it’s not just ‘weird’. There might be something peculiar—maybe even disturbing—that happens inside you when confronted with Tessler’s work. It toys with horror and tragedy at the same time as we’re simultaneously drawn to and repelled by these virtual bodies; when they smile it can be terrifying, when they frown we’re surprised by sympathy. This is something we can all feel in our inner selves but may struggle to verbalize. But Tessler’s work in this pursuit by himself has been outdone by his work with Baken under Cool 3D World. It also adds a lot more humor to the style. Those animated shorts stay with you for a long time due to offering a smorgasbord of emotions.

a videogame is also possible in the future.

Now the pair is looking to build upon Cool 3D World as they’ve seemingly established a symbiosis and can produce more ambitious works. As such, today they’ve released their first full-length music video, called “The Summoning of the Skylark.” Running for nearly four minutes, it depicts an almost inexplicable ritual yet remains somewhat coherent within its own twisted world logic. It starts with a dancer in waist-deep water leaping in arabesque. Then a group of men enter, chanting as portraits against a black background, as if a homage to Queen in their famous “Bohemian Rhapsody” video. These men then morph into animals before praying and summoning the skylark in some distant xeric land. The video ends beautifully and horrifically with these diverse masculine bodies forming as one into a mate for the skylark, flying off into a horizon. The end.

As with all of Cool 3D World’s creations this music video rendered me speechless at first. The temptation is to look for meaning in all this evocative imagery but that’s a mistake. “We both like the idea of music informing the visuals—we finished the track before even starting the video,” Tessler tells me. “Once the music was completed, we discussed emotions it evoked in us, and specific visuals we thought would fit with the music.” The visuals are only there, then, to match or perhaps enhance the emotions that the music explores. It is not designed narratively or even metaphorically; it’s more like a music visualizer except it’s churned through the noxious brains of Cool 3D World rather than a machine capable of producing spinning lights.

As said, this is only the start to Cool 3D World’s gradual expansion beyond Vine and still images. Right now we have a music video but I’m told a videogame is also possible in the future. When asked what kind of videogame they would make together, Tessler says: “Maybe something centered around puzzles, eating, and skateboarding.” Of course. What else?

Keep up with Cool 3D World on its website and on Vine.