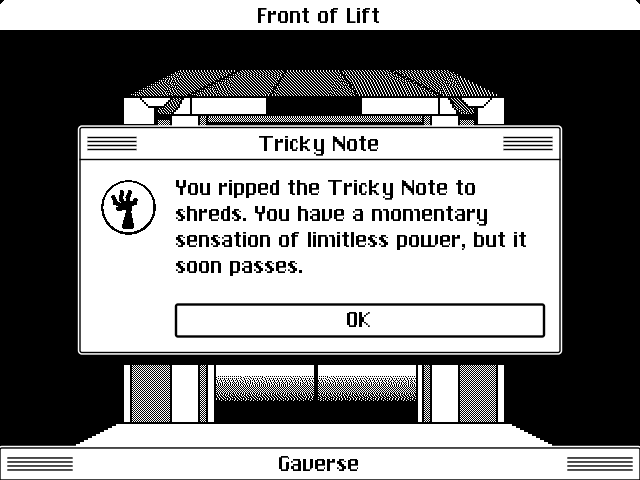 Imagine a purgatory for the beleaguered office worker. It is probably a world of endless (or, to misuse the term to constructive ends, more endless) meetings and water cooler chat. Fair enough: That is what office culture and the cultural portrayals thereof have conditioned us to expect. But what if this purgatory was something else entirely, a strange liminal space whose only connection to office life is the skin of operating systems past?

This possibility is the central conceit of Wince Nail, a game originally created by CYBEReris for the Myst Jam. The game, which is currently available in demo form, tells the story of a worker who, as punishment for his indiscretions, finds himself in corporate purgatory. Unbeknownst to our protagonist, his employer, Corporeal Industries, created a liminal place to stash intransigent underlings. It started as an outsourcing facility, but corporations are prone to mission creep and now it’s a prison masquerading as a vacation spot.

Wince Nail is both a literal and figurative black box

Wince Nail is, in a sense, a very traditional vision of corporate hell. The game’s aesthetic is straight out the original 1984 Mac operating system. It is the kind of thing one joylessly employs. It is also a conceivable outgrowth of corporate IT practices. Wince Nail is not really going for verisimilitude, but its alternate universe is sufficiently plausible.

In that respect, Wince Nail is what you’d get if you stretched the internal logic of a Dilbert strip until you were looking at a Black Mirror episode. Its world is both distinctly fictional and entirely plausible, the product of decisions that would be understandable in isolation though not in their totality. The purgatory in which our protagonist finds himself is apparently only known to the company, but its existence still raises the question of what sort of society out of which such an idea might emerge. Wince Nail is both a literal and figurative black box in that respect. There is no world outside of Corporeal Industries’ confines, no indication of where the game fits into a broader society. If nothing else, that offers the comfort of not having to think of how Wince Nail’s world might relate to ours.

You can download the Wince Name demo over on itch.io.