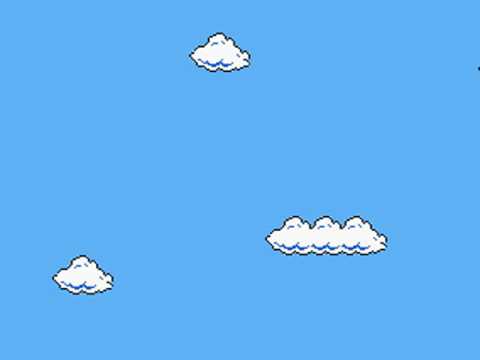 The New Yorker lifted the paywall on its marvellous profile of digital artist Cory Arcangel. You may know him best from his 2008 piece Super Mario Clouds (above) where he erased everything in Miyamoto’s classic except the — go on, guess — clouds. Below, Arcangel explains why frustration is at the center of one of his newer projects, Various Self Playing Bowling Games (aka Beat the Champ), that involved hacking several bowling games to only throw gutter balls.

On one wall of the studio, Arcangel cued up the bowling projections, which Whitney visitors will see immediately after stepping off the elevator. The six projections present a history of the bowling-game genre, starting in 1977, with the Atari 2600’s rudimentary 8-bit imagery, and ending in 2001, with the Nintendo GameCube’s humanoid avatars, which are somehow more off-putting than their primitive precursors. “What’s more bizarre than virtual bowling?” Arcangel said. “Well, maybe those fishing games—that might be my next project. But throwing a gutter ball is just humiliating. That’s what makes the piece so ridiculous, but also sad and even oppressive. The failure seems funny at first—then it flips.” He was right; the repeating animations of frustration instill a rising sense of discomfort. The bowlers are virtual kin to Bruce Nauman, who, in his iconic 1968 video “Stamping in the Studio,” clomped around an empty room for an hour—a ritual of isolation and futility.

If you find Clouds meaningles, perhaps you’ll enjoy this completely pacifist runthrough of Super Mario Bros. involving no deaths of either Mario or any of Bowser’s minions. It’s oddly hypnotizing.