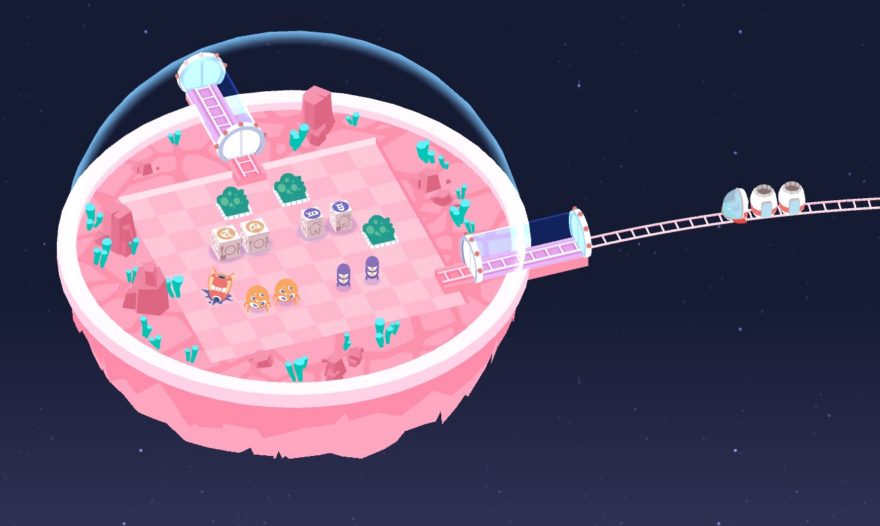 There’s something magical about travelling by train. It’s something that participants in the yearly Train Jam—a 52-hour game jam set on a train ride between Chicago and San Francisco—try to harness to make games. Alan Hazelden’s latest game, Cosmic Express, has it origins in that very train jam, and is consequently a “puzzle game about planning the train route for the world’s most awkward space colony.”

Back in 2015, Hazelden found himself boarding for the 52-hour train journey less than 24 hours after releasing his game A Good Snowman Is Hard To Build for the PC. “In hindsight, perhaps it wasn’t the best idea in the world,” he said. “I spent a lot of time being distracted, worrying about the launch of that was going, but since the Wi-Fi on the train cuts out for long periods of time, I decided to prototype a train-related game for the jam.”

That prototype was Train Braining, a prototype built in Puzzlescript that’s still available to play. I got to level three, before my sleep-addled brain refused to suss out the puzzles. Hopefully you’ll fare better. “Over a year later,” said Hazelden, “I was talking to Benjamin Davis about doing another project together, working with an artist this time.” Davis had previously worked with Hazelden on A Good Snowman Is Hard To Build. “We met many of the people from [French game collective] Klondike at GDC and they’re all incredibly talented people so we were excited to work with Tyu (Typhaine Uro) on a small project.”

The team threw a lot of different ideas into the mix before realizing they already had a great idea in Train Braining, and that the prototype was ripe for remaking. The plan was to improve the art, and more puzzles and mechanics, and “definitely more cute aliens,” according to Hazelden.

Cosmic Express has you building the train route for a space colony, with lots of alien colonists needing to be picked up and dropped off at their respective destinations. This sounds simple, but as anyone that’s ever tried to board a train in real life can tell you, train travel can be prone to unexpected problems. Here, the key challenge is that you start with space for only one alien at a time, you can’t cross the tracks over themselves, and thoughtlessly, the aliens themselves might not be in the most convenient of positions.

If you thought keeping the trains running on time would be easy, you’re mistaken. “People far too rarely have the opportunity to swear at a piece of train track because it can’t go there and pick up that alien and drop them off there because then there’s no space to go back and pick up *that* alien,” Hazelden said. Although I haven’t done my research, I’m willing to believe he’s right.

Hazelden draws comparisons between his earlier game Sokobond (2014) and Cosmic Express. “Where A Good Snowman focuses on one mechanic and does just that one thing really well,” Hazelden said, “with Sokobond and Cosmic Express it felt right to explore variants and similar possibility spaces. Planning out the order in which levels unlock is a tough problem when you have half a dozen.”

While Hazelden prototyped the game, he’s keen to highlight how invaluable his partnership with Davis and Tyu has been: Davis working on code and Uro on the game’s art style. The result is a cutesy puzzler that’s likely going to make you pull your hair out (if my adventures with the prototype are anything to go by), but the strength of the puzzle design should keep you crawling back for more.

Cosmic Express is coming soon to iPhone, iPad and Android. Find out more on its website.