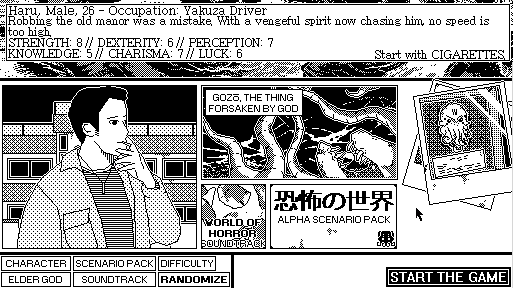 The cancellation of Silent Hills, the horror game sequel that was to be led by Metal Gear creator Hideo Kojima and Pan’s Labyrinth (2006) director Guillermo del Toro, was a shame for a number of reasons. Primary among them was the fact that one of the collaborators on Silent Hills was legendary manga artist Junji Ito.

Ito’s artwork often explores two areas: a disturbing style of body horror that is unique to him, and the existential inevitability of one’s demise. These interests shape his manga with horror stories that are hard to get out of your head, not merely for the strange ideas he thinks up, but due to the mastery with which he is able to visualize them on paper.

One of Ito’s most well-known works in the West is Uzumaki (2000), which tells the story of a small town that becomes obsessed with spirals, which sounds innocent enough, right? That vague premise lets Ito go deep and wide, with horrific images of spirals doing awful things to the human body; huge circular cavities in heads, a whole person turned into a spiral shape with a complete disregard for bones and joints, two bodies fully entwined in a painful corkscrew. This kind of unexpected, absurd terror permeates Ito’s mangas, which depict humans trapped inside chairs, people drawn towards mysterious holes in a mountainside, and chased around their homes by sharks with mechanical legs.

Again, it’s a huge shame that we won’t get to see Ito’s work in Silent Hills (but perhaps it’ll be present in Death Stranding?). But videogames won’t be completely absent of his influence, not if Paweł Koźmiński has anything to do with it. Koźmiński is working on a cosmic horror game called Kyōfu no sekai (aka WORLD OF HORROR) that is heavily inspired by Ito’s work, and from what can be seen of it so far, he’s doing a good job of capturing what makes Ito’s manga so memorable.

Koźmiński is 24 years old, currently based in Poland, and attending medical school. Somehow, in between his studies, he’s managed to find enough time to work on his game. Speaking to him, the motivation to commit to making this game becomes clear. “I’ve been a huge fan of Junji Ito for years now. There is this unique charm in the way he mixes the cosmic horror, worthy of H. P. Lovecraft himself, and unsettling imagery that stays with you long after you’ve finished reading,” Koźmiński tells me. “I think this certain kind of cosmic/body horror blend is criminally underrepresented in the western media and I’m planning to change that with WORLD OF HORROR.”

Kyōfu no sekai is far from an ordinary horror game, and not only because of the Ito influence—it combines a visual novel format with Solitaire and RPG elements. It’s set in the late ’80s and/or early ’90s and follows the ordinary people in a town that is haunted by supernatural events. You get to pick from a range of characters with different strengths and weaknesses, before setting out to “solve mysteries, make decisions and fight eldritch creatures,” as Koźmiński puts it, “all while gaining clues how to postpone the inevitable end of the world, which is the goal of the game.”

Koźmiński has invented a wild range of scenarios and creatures

There’s an alpha demo that you can currently download on the game’s itch.io page should you want to get a feel for how it all comes together yourself. Otherwise here’s a brief explanation of how it plays: You choose a mystery to solve and are then taken though a number of different location decks. In these locations, you draw event cards at random that you then have to deal with. Typically these are horrific scenes that ask you to make a decision with success or failure being determined by your character’s strengths. It’s possible to get into a turn-based battle with an enemy too, at which point you choose an attack (or to retreat) and then roll a dice alongside an enemy dice, with whoever’s dice getting the higher number landing the attack. You can also gain abilities and buy items that you can call upon during battles to help you out, should you need it.

“While the story’s beginning and the end may be similar each time, I’m making sure the actual investigation will be full of surprises for the player,” Koźmiński tells me. “I’m planning a continued support in form of free card packs and additional content so that there will be no two identical stories.” It’s the event cards that make up the investigations and it’s there that Kyōfu no sekai really shines. Koźmiński has invented a wild range of scenarios and creatures: occult visitors who draw symbols in blood, heavy tomes bound in human skin, rotting arms coiled around the ventilation shafts of a dark manor, and a lot more.

As with Ito’s own work, what stands out about the horrors Koźmiński has created is both the ludicrous nature of the ideas, and also how the finer details in how they are depicted. The illustrations that accompany each event, while static, are either as obscene or shrouded as they need to be to maximize the terror of the moment that the accompanying words describe. It also helps that Koźmiński has chosen to simulate the 1-bit black-and-white graphics of early Macintosh computers, which feels similar in style to much of Ito’s black-and-white drawings.

From what’s on show so far, it seems safe to say that Koźmiński’s goal of bringing Ito’s style of cosmic horror to videogames is on the road to success. Kyōfu no sekai feeds you enough information to evoke an irrational world of forbidden cults, faceless monsters, and bizarre compulsions. Koźmiński is hoping to get it finished and ready for Windows, Mac, and Linux by summer 2017.