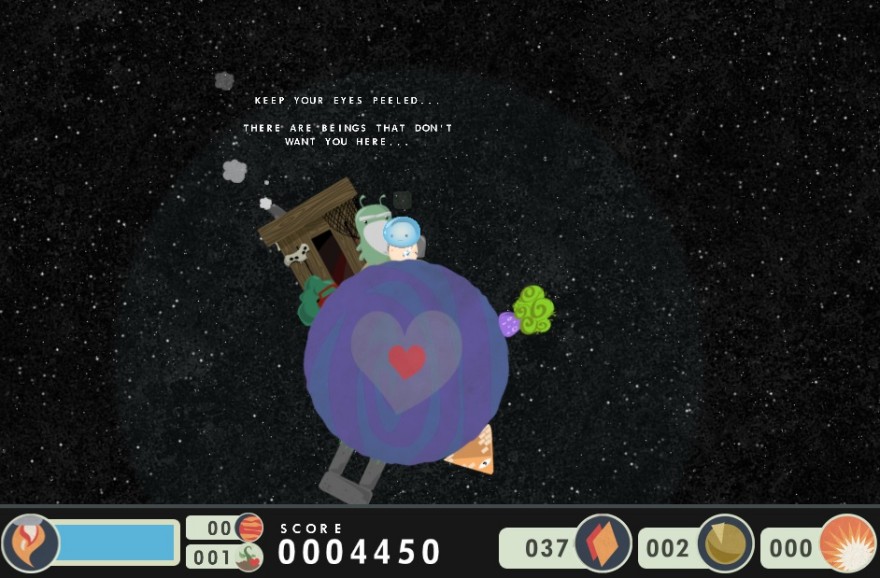 I could drift for days in space, alone, so long as the sequin twirls of distant stars and dreamy synths accompanied me. I tried shooting for that kind of existence in Cosmochoria, but after nearing death due to drifting through a red hot sun with just a space helmet as protection, I fell squarely onto a dead planet.

Cosmochoria isn’t about spinning in endless circles across a star-punched canopy, but it can be. The purpose that will eventually reel you in from euphoria is that of planting seeds to grow a health-restoring garden. You literally revive the hearts of tiny planets, which respond with a burst of erratic color as illustrative thanks.

differs itself from Starseed with an action arcade core alongside its calming play.

We have developer Nate Schmold to praise for this mix of spacey tunes and cartoon cuties. You can tell Cosmochoria is something he’s had brewing in his head for a while. It combines his years of running underground hip-hop and electronic record label Neferiu Records, of being a freelance illustrator, and a designer for hire.

I’d love to compare Cosmochoria to Starseed Pilgrim, as they each have dark voids and seed planting, and there’s a mystery to chase in each game’s universe. But Cosmochoria is less esoteric; it’s more direct about the discoveries to be found in free-floating space. In fact, there’s an old hermit who will speak of the galaxy’s history, pointing out that there’s a reason why all of the planets are dead. I still don’t know the answer myself.

Cosmochoria also differs from Starseed with an action arcade core alongside its calming play. This is where I find a slight issue. I don’t mind being disrupted by aliens, blobs and tentacles while planting seeds; I can build a pyramid base to deal with them. But the unlock system that offers better firepower and health in exchange for the crystals the enemies leave behind encourages grinding.

My eventual verdict will depend on how many ways there are to advance play. If it’s confined to defeating the terrible fire-breathing space dragons and mega-brain controlled giant flying saucers—which require those upgrades—then I’ll be disappointed.

However, there are artifacts to discover and combine apparently, which achieves … something. I’m hoping to be rewarded for my aimless drifts through space—the game’s most radiant moments for me—so that I feel comfortable with pursuing those relaxing minutes.

A pre-alpha build of Cosmochoria can be downloaded from its website.