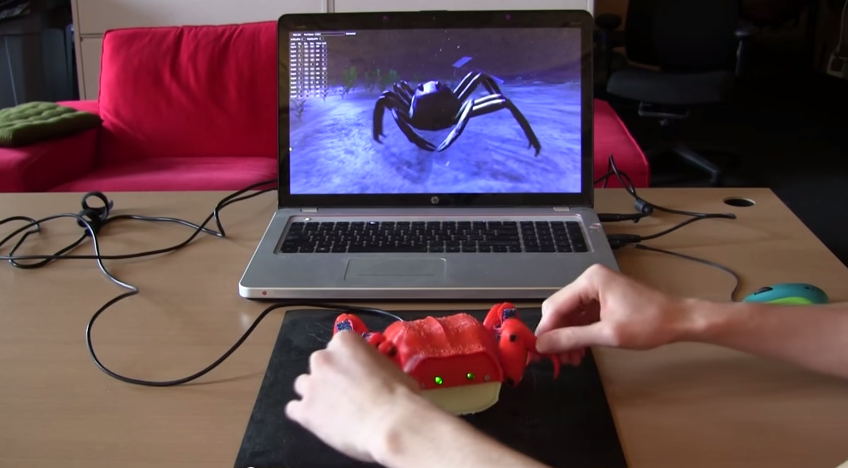 You’ve got crabs, videogame lover—a crab simulator and crab-shaped controller, that is.

The controller was created by John Choi, a student in Carnegie Mellon University’s Interactive Art and Computational Design Program. It consists of an orange body with four articulated crab legs. Unlike the real creature, Choi’s crab does not have claws and can therefore be manipulated without risking the user’s health. Those claws do, however, exist in Choi’s crab simulator, a game in which the crab’s legs are manipulated by adjusting its doppelganger of a controller.

Choi’s crab is an anthropomorphic handset. Since it resembles the character it is meant to control, its functionality is readily apparent: move a physical crab leg and watch the same thing take place in the virtual world. While one cannot reasonably expect every handset to resemble the character it controls—you would need hundreds of controllers-cum-voodoo-dolls to play Madden—the logic and appeal of this idea is readily apparent.

Choi’s crab is an anthropomorphic handset.

The crab controller is not an endangered species. Choi has released the files needed to create the plastic crustacean using a 3D printer. He also purports to have entered his creation in a variety of 3D-printing contests in the hopes of winning a 3D printer to donate to a middle school or high school. For the first time ever, then, crab may be the (intellectual) food of the people.

You can find out more about the crab controller and create your own by checking out this page.