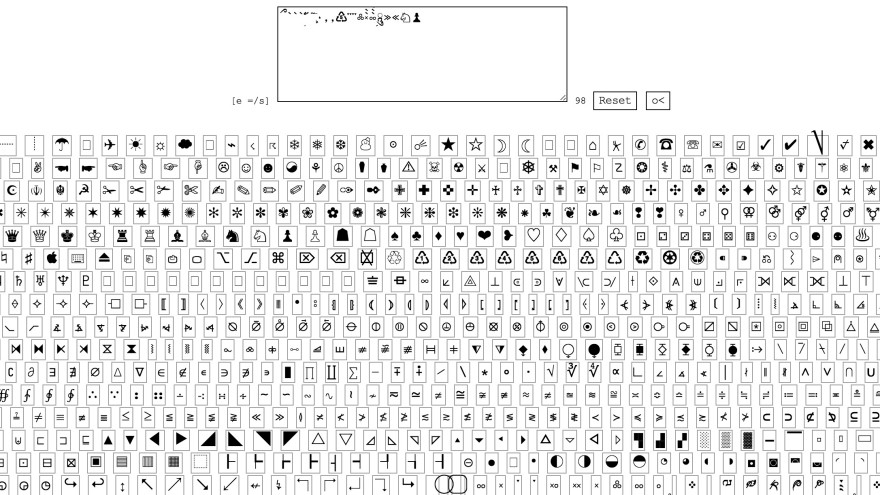 “Art,” as an uppercase institution comprised of oil paint portraits in gilded frames and cracked marble statues of muscular young men, is notoriously unwelcoming of audience participation. “No Touching” is the Met’s most important rule; guards pointedly remind visitors of this as they amble through the galleries. Snap a flash-less picture of the Van Gogh’s and the Picassos; Instagram, tweet, or tumble; move on.

Even contemporary art, so attached to the medium of immersive installation, has the audacity to demand “hands off.” Within an installation, it is easy to feel as though you are missing the point, if there even was a point to begin with. Chris Burden’s “A Tale of Two Cities,” for example, replicates a battle field with a militia of static action figures and toy vehicles. A partition separates you from the stationary scene, but binoculars are provided in case you want to feel closer to the massive setup. Approximately five thousand toys and you aren’t allowed to play with any of them. I push my glasses to my forehead and my eyes into the binoculars, the passive experience of peering at neglected relics feeling an awful lot like a waste of time. Maybe I just wanted a little more active violence from the man who shot himself for the hell of it.

The possibilities of net.art are about as limitless as the code of which it is comprised.

Net.art, on the other hand, is a virtual installation closer to the interactive experience of videogames. While the plastic arts are still weighed down with their physical meaning, net.art is as artificial as the internet itself. Faith Holland’s http://www.vvvvvv.xxx, for example, is made of the same stuff and exists in the same larger domain as, say, Kill Screen Daily, but it does something very different with that artificiality. Net.art never dares to ask “hands off”; user participation is an essential element of the genre. It is, in a way, a kind of aimless play. You clicked your way here, now click around and explore the online space provided. The possibilities of net.art are about as limitless as the code of which it is comprised. Web pages, hypertext adventures, and performance art on YouTube are all fair game for experimentation. So is social media, which invites new levels of user interaction and dispels with a sense of finality any remaining instincts not to touch.

Unlike contemporary ART’s overwhelming elitism, net.art doesn’t take itself too seriously. The medium is as accessible as the viewer chooses to make it. Contacting Damien Hirst requires patience, name dropping, and extensive communication with his “people” before you can start to make a connection. Have a question for your favorite net artist? A polite email, tweet, or comment = results.

Indeed, the focus of some entire projects is centered upon user interaction. This August, Internet artist Ryder Ripps’s technology company okfoc.us launched an extension of his newmoticons project. In the original project, Ripps ran the new emoticons twitter feed comprised completely of unicode emoticons, each “facial” expression paired with an appropriate name. Unicode is a palette of all written characters and symbols, many of which do not have inherent meaning in the English language. Now newmoticons.com has created an interface which invites artists to experiment with the medium. The premise is simple: name a randomly generated set of unicode characters that resemble a face. After submitting your new emoticon to a gallery of other similarly hilarious-looking and hilariously named faces, you can tweet your named emoticon or others in the gallery to your own account. The characters themselves aren’t as interesting as the names anonymous users christen them.

Characters are what you make of them. Our interpretation of them is susceptible to the powers of suggestion. The site is structured in such a way that invites us to view unicode characters as facial features. The user interaction makes it fun, and the diversity of anonymous voices embodies the fragmented humor of the internet.

While the random generator of newmoticons assembles a picture for you, Crashtxt provides users with the tools and freedom to create what they want. Net artist JimPunk’s unicode keyboard, which also includes emoji, allows users to type the characters in any combination and submit it to the main twitter feed of crashtxt. Scrolling through the feed is a riot of symbolism and recontextualization. Some users input seemingly random combinations while others create elaborate patterns using the provided tools. The possibilities are endless and the results are endlessly interesting: there was a game of unicode tic-tac toe going on last week (it ended in cats, naturally.) Some tweets extend beyond the standard twitter interface, scrolling out past the boundaries in all directions. This broken text is hardly unique to crashtxt. Projects like glitchr specialize in glitched social media output.

I wanted to know if these visual glitches were a part of the project’s intention. I emailed JimPunk from his website contact form, closing my message with, “Were the glitches an intentional component of the project, or did users start this on their own?” 24 hours later JimPunk responded to my two paragraph email with “Hello.” An hour later he sent another email:

I responded to his “Yep” with “yep.” because I’m from Kentucky and that’s a thing that we do. But actually I didn’t know how to respond to “yep” and was pretty sure I was getting trolled. (When in doubt, troll back. That’s a rule, right?) My initial message might have been silly given the spirit of the project; it is called crashtxt, so obviously some kind of “crashing” was intended. Overanalyzing and over-understanding crashtxt ruins the fun, but that didn’t stop me from wanting to figure how to make something like this:

The answer is as simple as knowing what to google. I won’t tell you, just like I wouldn’t tell you how to beat a videogame in a review of it, but I will clarify what the “glitch” text actually is: in most cases the text only appears to break the feed. There is nothing truly broken. It’s all in how your browser renders certain combinations of unicode characters. In the case of iOS or Android Twitter apps the user input can actually cause a crash.

A few days later, the morning after the haze of Halloween cleared, I received another pair of emails from JimPunk. The first linked to the real time results for crashtxt, which provides a pretty accurate combination of reactions to the feed alongside the actual content: 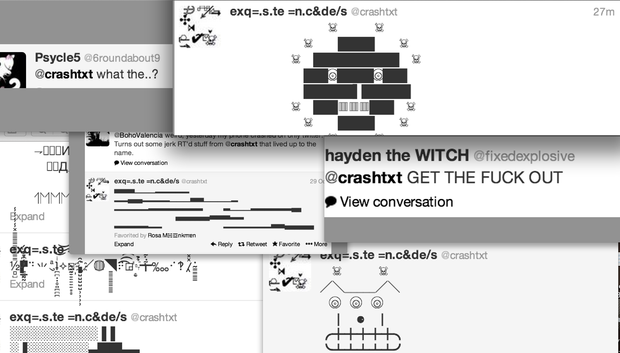 The second link he sent was to this picture, which simultaneously exhibits user dedication along with the possibilities of the unicode keyboard. One user claims that one of the latest tweets crashed both the Twitter app and the Safari iOs. Was this combination of unicode and emoji that jimpunk sent me that  tweet? Or did he just send it to me because he thought it looked cool?

I replied to his wordless response with a link to one of my unicode experiments and a newmoticon. 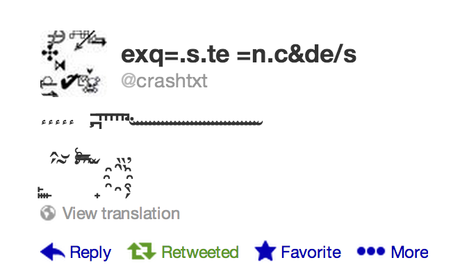 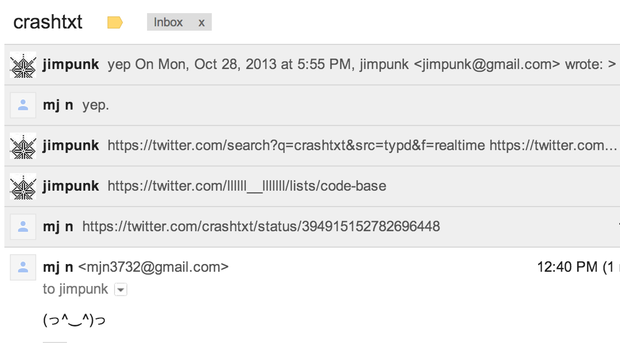 My final response is an emoticon named “Kirby,” by the way. (I didn’t name it, but cheers to the person who did.) Couldn’t have captured my thrill over making something cool and non-linear with the unicode keyboard in any other way.

I keep going back to Crashtxt to make new patterns, to refresh the feed to see what others have done. It’s like the horse_ebooks of unicode. It looks like a bot, talks like a bot … but it’s not a bot, which you know if you decode the user information. In this case, it’s better that it isn’t, unlike horse_ebooks, which everyone yearned so dearly to believe was a bot. Crashtxt, or exq=.s.te =n.c&de/s, is a microcosm of the internet, a bunch of random anonymous noise, all different but slightly the same. The variety is staggering; there’s something new and weird every day. It kinda reminds me of the shitty interactive displays in children’s museums—they are always broken or sticky or both. You can’t trust people with nice things, which is the understandable underlying reason why “ART” doesn’t want to be touched. If we all traced our fingers over the paint strokes of “Starry Night,” there wouldn’t be a painting left to finger after a few months. Is crashtxt meant to be broken or did users figure out how to do it themselves? Yep.