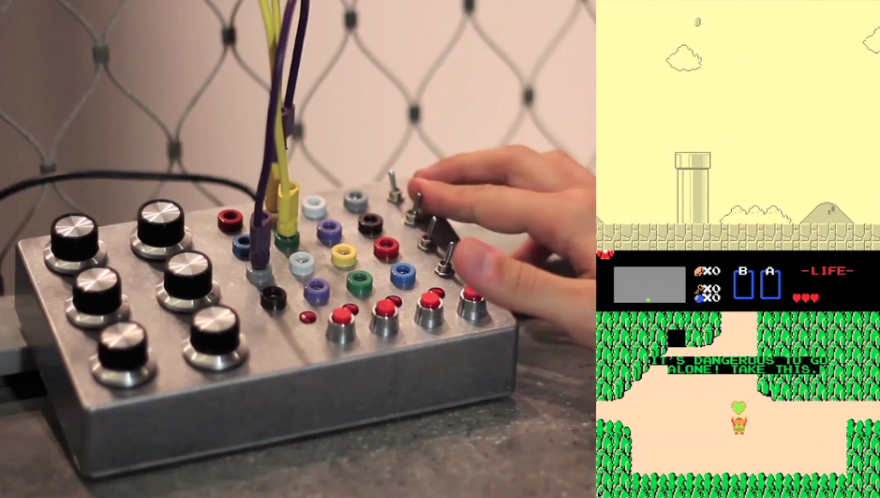 Technically speaking, illucia qualifies as a game controller. But as its strange, dazzling data-jacking proves, it operates on a whole other metaphysical level. We see it connected to Tetris doing a block-falling remix of Notorious BIG; making music from bullet-hell patterns; ethereally beaming Mario from Super Mario Bros. into The Legend of Zelda. What the blazes?

While gamepads let us control Master Chief, illucia lets games control other games. Confusing, I know. But also beautiful and terrifying. As its inventor Chris Novello told me over email, “illucia is about connecting computer worlds.” It lets a player take activity from inside a game and send it anywhere: music software, a paint program, another videogame. You name it.

Videogame on videogame controlling is not only mind-bending, but also bends the code. At least “codebending” is the term Novello used for it. His magic controller allows him to twist a few knobs and splatter the screen with trippy audiovisual patterns and generative art. “I deeply believe in the medium of games, but I think it has so much more potential than our culture currently activates. I don’t think that illucia is the answer to this, but I do hope it helps people see new possibilities and ways of thinking about the medium,” he told me.

This isn’t only aesthetically pretty, but gives new insight on the inner working of the software, allowing us to visualize “the personality of the game’s interior,” according to Novello. Apparently, a lot of games’ personalities are total nightmare material, borderline chaos.

But chaos is the wrong way to think about it. He tells me illucia is not really glitch art nor noise, but a precise instrument for playing a network of software, like a surgeon’s scalpel, as sure as pushing to the right on a d-pad. Games don’t crash under its manipulation. For the most part, it’s clean data regulation. It responds reliably, and poses the question, as he puts it: “What if we had more power to decide how information flows, and we used that to make art, perform, and just experience the joy of playing with systems?”