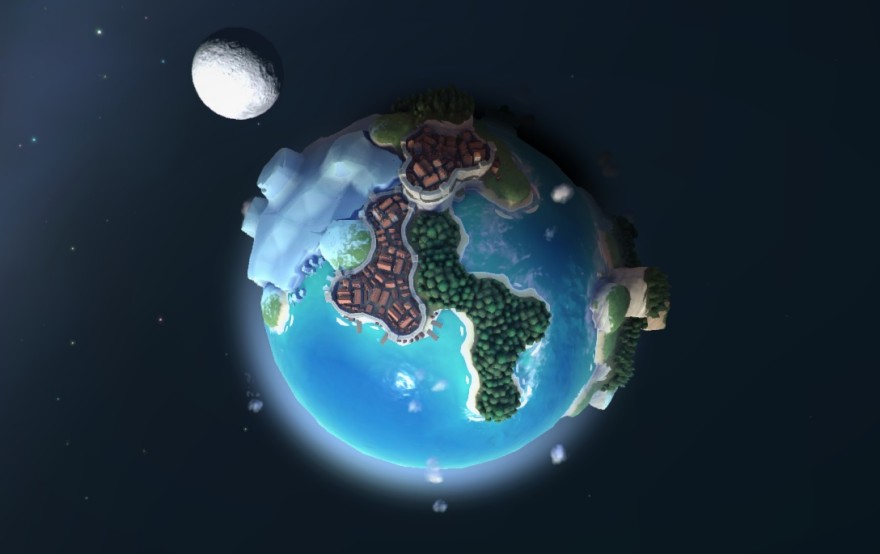 I’ve just done us all a favor. Sure, the North Pole is heating up, the ice caps are rapidly melting. But chill out, the globe spinning in front of me right now, on my monitor, is miles thick in solid ice. Try melting that global warming. Admittedly, I was a little overzealous in my ostensible goal of saving the world. There is no inhabitable land or water left on this planet—at least not for humans and most creatures—only centuries of thick frozen ice to slip around on. That said, humans are probably the worst thing that’s ever happened to Earth, so perhaps by wiping us out I have, indeed, secured the planet a better future.

The digital toy allowing me to play around with this spinning globe all of my own is Oskar Stålberg’s “Polygonal Planet Project.” It’s described as “a study in tilesets”—Stålberg’s interest in this stemming from being a videogame artist—and it is a beautiful thing to have open in your browser. Beyond staring at it, you can use your computer mouse to pop-in and pop-out hexagonal pockets of different types of terrain. Start by selecting a biome theme (forest, ice, town, grassland), then a tile size, and then you can place it anywhere on your planet with the click of the left mouse button. You can also add layers of the same biome on top of another to create rises in the topography; or, similarly, using the right mouse button lets you sink the land all the way back down to ocean level.

an exercise in pure aesthetic

It proves remarkably similar in its experimental playfulness to Stålberg’s previous project, Brick Blocks (2015). But that only let you determine the shape of an architectural structure while the faces of each block fashioned themselves automatically into rooftop terraces or towers pocked with windows accordingly. In Stålberg’s Planet you can decide for yourself both the layout and the motif of each hexagonal tile. Intuitively, it encourages greater exploration with its scientific toolset than Brick Blocks. Even so, it remains an exercise in pure aesthetic, as there are no simulated consequences for your edits to the planet’s surface.

Sure, I turned my globe into a giant snowball, but the results of doing this was all embellishment on my part. When you construct settlements they do not become visibly populated. You can zoom right in with your mouse wheel for evidence but not a single person will be seen. You are a god with all-power but can only build and destroy; life is beyond your control. The closest thing you do get to world simulation are slight tidal changes: the sea’s white foam adjusts to whirl around the periphery of the coasts you have carved. There are also clouds that float by but they’re mostly doing their own thing.

You can create kingdoms amid the ice, hamlets sitting quietly between the trees, even castles sat alone in the sea. But this is all. If you want more, you must imagine the archaeology of your world, informing its current shape, and that might also determine its future. Or you can simply let it spin slowly in a spare tab in your browser so that it may entertain the occasion of procrastination.

You can play Planet in your browser or you can download it here.