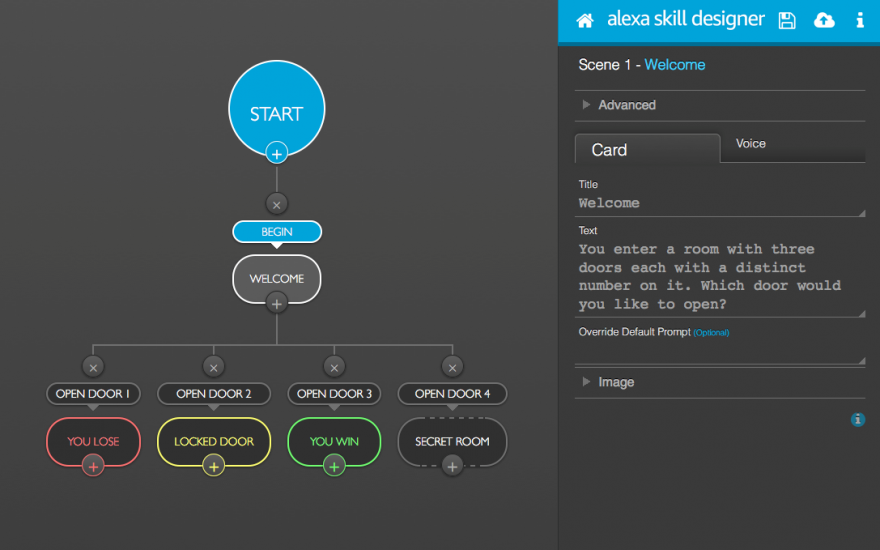 Interactive fiction has seen a resurgence in the past few years. From Chris Klimas’s freeware hypertext software Twine, to the visual novel Python engine Ren’Py, branching narrative stories are more popular than ever in videogames. But most interactive fiction games rely on written text, usually through hyperlinking passages or narrative decisions. These stories tend to stay in the digital world, rarely calling on the player to interact with the game outside of using their mouse and keyboard.

Amazon’s new program, the Interactive Adventure Game Tool, allows writers and developers around the world to create interactive fiction stories that rely on voice recognition. Created for game development on the company’s Amazon Echo (a hands-free speaker you control with your voice)—also known as Alexa—the Interactive Adventure Game Tool was developed in Node.js by Amazon Advertising team engineer Thomas Yuill. Yuill’s tool lets users write branching narrative structures that can later be published online to be played by Alexa users throughout the globe.

Amazon’s Alexa provides an all new medium for game design

Of course, adventure games have already been released as skills, or Alexa apps, for Amazon Echo owners. Just take a look at The Wayne Investigation skill, an adventure story released earlier this year in order to promote the Batman vs. Superman movie. The game puts the player in the role of a Gotham City detective investigating the death of Bruce Wayne’s parents. During pivotal moments in the story, the game provides the player the option to use their voice to choose the direction of the Wayne murders investigation—for better or worse. While the game is largely intended to be a tie-in story, it demonstrates the branching narrative abilities creators can use while creating stories for the Echo. Just check out Twitch streamer ksizzle’s live playthrough of The Wayne Investigation over on his official YouTube channel to get a better idea of the skill in action.

But the Interactive Adventure Game Tool doesn’t just let commercial developers create projects to promote their work. With the application uploaded onto GitHub, virtually any Alexa user can get started on creating their own stories for the Amazon Echo through the Tool. Not to mention, Amazon provides the Trivia and Decision Tree skill templates online to get started, in the hopes that newcomers can learn how to build their own games through the site’s official skills. While not necessarily the most approachable suite in interactive fiction development, Amazon certainly offers a hand to writers and storytellers interested in giving the program a try.

What’s truly fascinating about the Interactive Adventure Game Tool, though, is how Amazon’s Alexa provides an all new medium for game design. With virtual reality already on the rise this year, audio input provides another outlet for game makers to bring multimedia worlds into our everyday life. Granted, only time will tell if the Interactive Adventure Game Tool proves to be an inspiration for interactive fiction writers. But, if Twine and Ren’Py are any indication, digital storytellers are quick to experiment with new tools once they’re released. Hopefully, Amazon’s program isn’t the exception to that rule.

You can find out more about Amazon’s Interactive Adventure Game Tool right here.