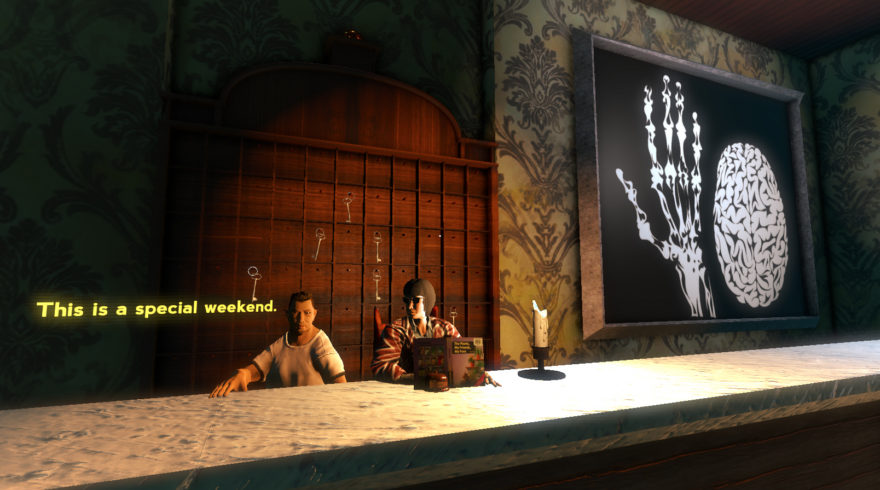 Early last year, independent game maker Cosmo D came bursting onto the scene with Off-Peak (2015), a bizarre exhibition of artifacts that is museum, musical, and story all at once. It threw you into a train station on the very edge of reality and gave you a task to do, begging you not be distracted by the infinite staircases or the inexplicable, repeating figures. Like lots of games, it was a “love letter to a lot of things,” and like lots of games, it evokes the desire to re-explore.

Luckily, Cosmo’s new game The Norwood Suite is being realized in the same vein. Think The Grand Budapest Hotel (2014) meets The Beginner’s Guide (2015) meets Dali: The Norwood Suite is swimming in surreality just like its predecessor. Instead of a train station, this time you’re in a hotel formerly owned by P. Norwood, a renowned pianist, whose old bedroom is the eponymous “Norwood Suite.”

The Norwood Suite is swimming in surreality

A suite that was composed for him supposedly plays into the main story, as explained on Cosmo’s devlog, and glimpses of drawers full of sheet music can be spotted in the teaser trailer, as well as a whole lot of pianos. It’s all contained within the uncanny environments pioneered in Off-Peak—they’re set in the same universe—though nothing so far looks quite as bold as Off-Peak’s infinite collage of ephemera.


The cool thing about The Norwood Suite—besides all of this, of course—is that it’s not going to be a linear adventure. Cosmo doesn’t call it episodic, as it may not have a specifically directed arc, but he does say that it will be released over time like a graphic novel. He compares it to the process of making music, and explains that his additions to the initial version of the game are reactions to each other instead of something heavily planned. The hotel setting encourages such organic growth, as characters can come and go, stories can overlap, and the setting becomes an important constant between them all.

Good news for Cosmo is that the upcoming Fantastic Arcade as well as Off-Peak’s upcoming Steam release mean that The Norwood Suite will get a boost in the next few weeks, but he’s been quiet about possible demos even though the game itself seems to be making significant progress.

If you want to hear more about The Norwood Suite as it opens its doors, you can follow Cosmo on Twitter or keep an eye on the game’s devlog.