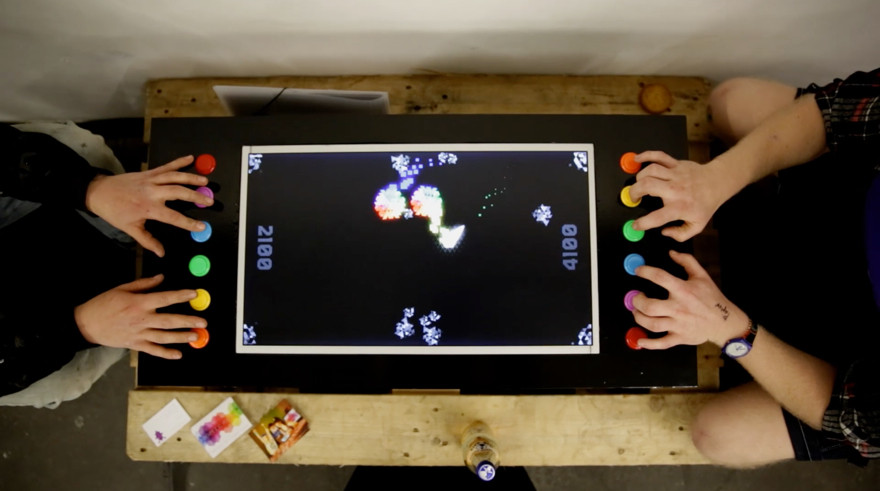 Kill Screen is proud to present Let’s Play, a production of the European culture channel ARTE Creative and Darjeeling. The five-part series takes a look at the vibrant European game-making community and the startling, funny, and sublime work they do. Take an exclusive early look at the first episode below, as well as an interview with the directors. We’ll be broadcasting the rest of the series as it debuts.

Let’s Play, the popular YouTube genre in which a player guides you on his or her journey through a game, are about more than just play. “In let’s plays, you don’t play for yourself, but you share your experience,” explains the journalist Laurent Checola who, along with the filmmaker Thomas Kimmerlin created Let’s Play, a documentary video series about Europe’s indie game scene. “We changed the perspective of let’s plays (that are flourishing on Youtube),” Checola says, “but we kept the philosophy.”

“We wanted to describe a vivid European scene.”

That philosophy, in a nutshell, is that community matters. Let’s Play is about games, sure, but the finer points of their gameplay are largely incidental. “With this project, we wanted to go beyond a gallery of portraits of videogames creators, and describe a vivid European scene,” Checola says. “We didn’t want to make a movie about games,” adds Kimmerlin, “but about people creating games and people playing them.”

About those people: Let’s Play includes interviews with developers, journalists (Disclosure: the luminous face of Kill Screen news editor Chris Priestman appears in an early episode), and footage from events including Berlin’s A MAZE. Festival. “Our first shoot together was A MAZE,” recalls Kimmerlin, who, unlike Checola, had not previously covered videogames. “I dived head first into the swimming pool, meeting with all those crazy, fascinating game developers and players.

Let’s Play comes along at a time when there are plenty of videos about games but no established visual language that can be used to discuss them. In that respect, a large part of Let’s Play’s appeal stems from the fact that it does not feel beholden to the beats of any given game. “Of course we had to show the games, but the core of the documentary is about humans. People bring the energy,” explains Kimmerlin.

“I spent quite some time researching how video games were shot on TV programs and documentaries since the 1970s/80s/90s,” Kimmerlin says. “90% of the time, the video games were shown through the gameplay and mainly screens [and] controllers.” Not so in Let’s Play. Fragments of gameplay comingle with players congregating and developers experimenting. Gone is the relative linearity of gameplay videos. Kimmerlin adds: “The cool thing about indie games is that they are indeed very innovative with the gameplay so one can shoot more than a screen and a console controller.”

Indeed, the fourth episode of Let’s Play is devoted to the evolution of videogame controllers. In one shot, two players pull at a stuffed latex glove hanging from a table. It looks a bit like an udder. Let’s Play doesn’t set out to convey every aspect of the indie gaming—it is divided into five discrete episodes, “like a drama!” Checola points out—but its focus on these small details feels true to the world it depicts.

While there are surely more stories to be told about indie games, Checola and Kimmerlin have focused on capturing the ethos from which these games stem. Let’s Play has a good deal of breadth but, to its credit, is a series of vignettes as opposed to an encyclopedia. Further exploration of its world, as in many games, comes down to self-guided play. “We hope that spectators and players will follow the breadcrumbs of freedom of creation,” Checola says. “I am the perfect guinea pig,” Kimmerlin adds. “I had never played an indie game before [and] you should have a look at my phone now. Too bad I cannot bring Roflpillar every with me!”